India stands with France on all its G7 agendas: PM Narendra Modi in France 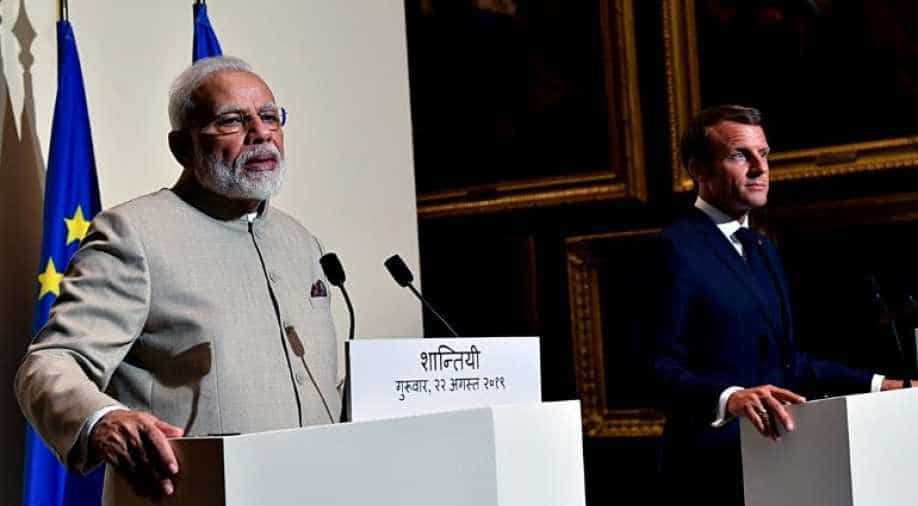 Prime Minister Narendra Modi and the President of France Emmanuel Macron at the Joint Press Statement, at Chateau de Chantilly, in France on Thursday. Photograph:( AFP )

Prime Minister Narendra Modi on Thursday held an "excellent round" of discussion with French President Emmanuel Macron during which he has conveyed that New Delhi "stands with" Paris on all agendas it is pursuing in the upcoming G7 meeting.

"The Prime Minister had an excellent round of discussion with President Macron last evening. The discussion lasted over 90 minutes and was characterised by a great deal of warmth and friendship. It demonstrated that France and India are two strategic partners," said Foreign Secretary Vijay Gokhale.

"Among the topic they discussed was the upcoming G7 meeting. And Prime Minister Modi thanked Macron for inviting India. The Prime minister has conveyed that India stands with France on all aspects that France is pursuing, and we wish all success to France to fulfilling that agenda for the G7 meeting," he added.

Modi will participate in the G7 summit as Biarritz partner in sessions on the environment, climate, oceans and on digital transformation on August 25 and 26. In a joint statement released after the two leaders' meeting, France and India said they will support new initiatives aimed towards low greenhouse gas emission.

"Under the framework of the G7 Summit in Biarritz and the United Nations Secretary-General's Climate Action Summit on 23rd September 2019, France and India will also support new initiatives aimed towards low-GHG development resilient to climate change notably through financial flows alignment with the Paris Agreement objectives and supporting transition towards lower emissions of high emitting industries," read the joint statement Gokhale said that environment and global warming are big parts of the upcoming G7 meeting and India is committed to the Paris accord.

India has made an important commitment that it intended to fulfill, he noted.

"Obviously environment and global warming are the big part of the G7 Summit that is taking place on Saturday and Sunday. Prime Minister Modi has conveyed that India is committed to the Paris accord. India has made an important commitment that is intended to fulfill", said Gokhale
He said that Prime Minister Modi noted that the G-7 countries and international community, at large, should fulfill their commitments regarding the environment, global warming.

On the bilateral side, Modi and Macron discussed a gamut of issues.

"They held a discussion on Indo Pacific and on the possibility of cooperation between India and France in the region," Gokhale said.

Several regional issues were discussed by the two leaders.

"During the meeting, Macron condemned terrorism in all its form and manifestations saying it cannot be justified on any grounds whatsoever and called for halting cross-border movements of terror outfits including Jaish-e-Mohammed, Hizbul Mujahideen, Lashkar-e-Taiba which are based in Pakistan and engage in anti-India activities, particularly in Jammu and Kashmir," he added on the second day of his visit, Prime Minister Modi met France Prime Minister Edouard Philippe and also addressed the Indian community, before flying to the UAE.