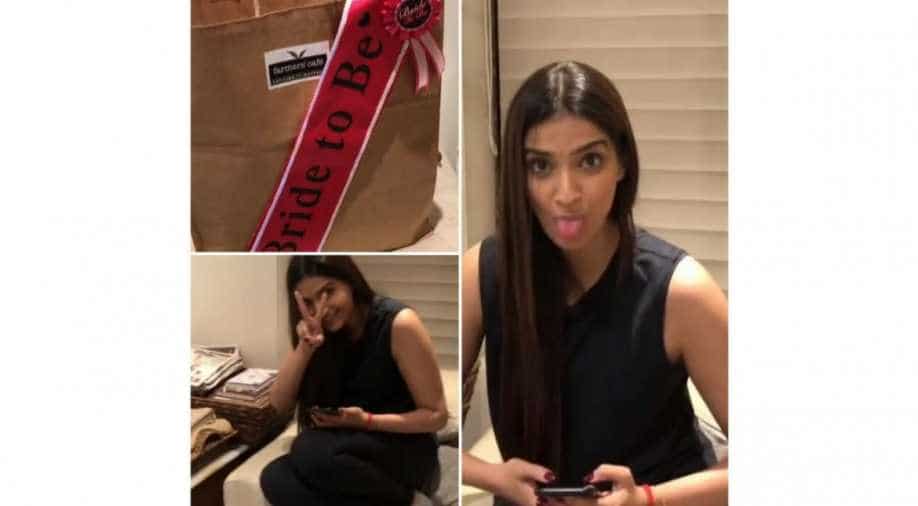 Bollywood’s most awaited wedding of the year will take place on May 8 as the Indian fashionista Sonam Kapoor will marry her longtime boyfriend Anand Ahuja. The Kapoor residence was seen getting decked up yesterday as the festivities will start from May 7 when the pre-wedding rituals commence. Also Read: Deepika Padukone to skip Sonam Kapoor, Anand Ahuja's wedding on May 8

In the midst of all wedding shopping, decoration and lot of prepping up, Sonam Kapoor, the bride-to-be was spotted in a sweet video made by veteran actor Anupam Kher who went to visit the Kapoors at their home in Mumbai.

In a video posted on Instagram, Anupam Kher took Sonam by surprise when he started shooting her as she was looking in her phone. Sonam then smiles looking at the camera, poses coyly with cute expressions. There is also a sash nearby that reads 'Bride-To-Be' hinting that there must have been a bachelorette for the style icon.

The video is captioned: “Bride to be. My dearest darling Sonam Kapoor. The little girl has grown up now.”

Anupam Kher and Sonam’s father Anil Kapoor is known to be the best of friends. They are both going to perform at the reception party, dancing on some special tracks. As per a report published in a fashion magazine, a source revealed, “Anil is ecstatic about his performance on Sonam and Anand’s sangeet. He will perform on two of his favourite numbers – Gallan Goodiyan from "Dil Dhadakne Do" and My Name is Lakhan from "Ram Lakhan". It will be more fun because Satish Kaushik and Anupam Kher will also be joining Anil.”

Sonam Kapoor will next be seen in "Veere Di Wedding" with Kareena Kapoor, Swara Bhaskar and Shikha Talsania. She will also be seen at Cannes red carpet on May 14 and 15.