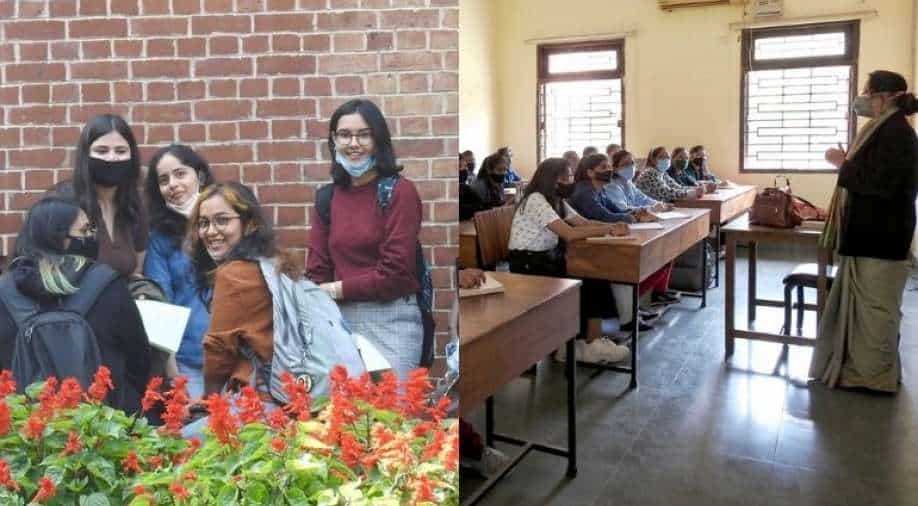 The canteens and roadside eateries were abuzz with activity, bringing cheer to the owners as well as the students many of whom could bond with their friends over a cuppa for the very first time. Photograph:( IANS )

Earlier this month, several student bodies had held protests demanding the reopening of the campus. The authorities decided to resume the classes after a decline in number of COVID-19 cases in the national capital

Classrooms abuzz with students wearing masks, queues at canteens and roadside eateries, and bustling crowds at nearby metro stations -- the Delhi University campus in India's capital New Delhi, came alive on Thursday as students returned to colleges after a gap of almost two years.

The varsity was shut closed in March 2020 owing to the breakout of the COVID-19 pandemic.

The Vishwavidyalaya Metro Station, the nearest such, swarmed with students as they headed to their colleges located in the north campus, where they were greeted by guards bearing thermal scanners in their hands.

The canteens and roadside eateries were abuzz with activity, bringing cheer to the owners as well as the students many of whom could bond with their friends over a cuppa for the very first time.

As students queued up outside stalls to savour momos, tea, sweet corn and other snacks, business returned to these eateries that had been left cash-strapped owing to the closure of the university. When PTI probed inside the classrooms, most students were seen wearing masks.

Manish Kansal, a teacher at Hindu College, said the students' excitement was quite apparent despite their masked faces.

"We were meeting our students for the first time. They were wearing masks but we could see the excitement in their eyes. Some of the students were even clicking pictures of the college, and the roads and traffic outside," he told PTI.

Gajendra Mohan Thakur, a 26-year-old Campus Law Centre student, said, "I was excited to go back to the campus. The university was shut for around two years and the online mode of study was not efficient enough to substitute the offline mode of education. It is a time to reclaim our lost years."

Kalyanai Harbola, a first-year student, made no attempt to hide her excitement and said the reopening of campus brought her life back on track. We are super excited to join offline classes as it provides a whole new bunch of opportunities and exposure to shape our future, she said.

Earlier this month, several student bodies had held protests demanding the reopening of the campus. The authorities decided to resume the classes after a decline in number of COVID-19 cases in the national capital.

While there was a good turnout of students from the national capital, attendance from other states was low, with their numbers only expected to pick up from the next week. Principals, however, said the turnout was better than what they had expected. According to teachers, attendance was higher among second-year students as compared to those from first-year.

However, not everyone was happy with the resumption of offline classes as outstation students complained of a spike in rent at paying guest accommodations. Gauri, a third-year student of English (Honours) from Kerala, said the PG rates have tripled. PG owners are taking advantage of the situation and asking students triple the amount of the actual rent. They are asking for Rs 16,000 for a triple-seater room. This is too much," she said.

Several outstation students PTI spoke to complained they were given too few days to plan their return. I am anxious since we have exams in the next 20 days. We have to sort many things out and also study for exams. This is an additional pressure. Students were asking for hybrid classes but our demand was refused. They said it is not possible, said 24-year-old Aditi Jain, a student of Masters in English.

Watch |  Gravitas Plus: Is Delhi University being unfair to students?

Another student, 18-year-old Mamatha Rose from Kerala, who looked visibly tired after standing in a long queue at the Vishwavidyalaya Metro station, too shared her grouse. "They earlier informed us that you have to come to Delhi. But two days back they told us you can take online classes. I mean, there is so much mismanagement. We had already booked the tickets and my friend and her father helped us in booking a PG, she said.

"They did not give us enough time to shift. Today, I am unable to attend classes because I need to shift. They should have provided us with accommodation facilities," Rose added.

Even those who managed to find a stay in university hostels are no better off. With many of the hostels under renovation, students are forced to find accommodation elsewhere.

"The hostel allotment is underway but, anyway, seats are limited and students are given hostel rooms on the basis of a merit list so very few students get them," said a student of Kirori Mal College.