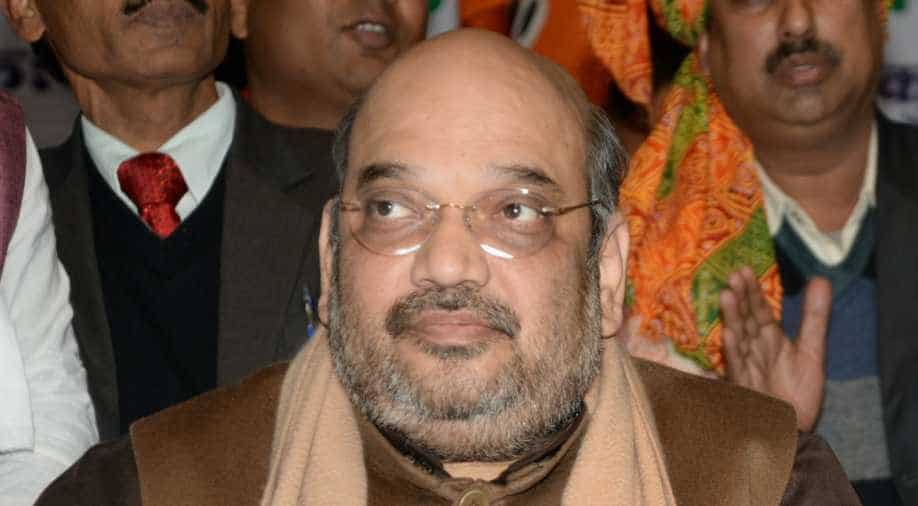 Spurred by the spate of recent electoral victories, the Bharatiya Janata Party has become audaciously ambitious. It has begun to not just enter enemy territory with new-found confidence and aggression but also march into enemy strongholds within that forbidden territory.

On October 3, party president Amit Shah launched the Jan Raksha Yatra (March for People’s Protection) in the Marxist bastion of Kerala — and from Kannur district which has been the centre of political violence. If the BJP’s opponents thought this was another symbolic show to remind the people of the party’s presence in this southern state, and no more, they were soon disabused of the notion when Uttar Pradesh Chief Minister Yogi Adityanath arrived on wednesday to participate in the high-profile event.

Amit Shah claimed that more than 84 BJP-RSS workers had been killed in Kannur alone since 2001 by Left-supported individuals and organisations.

The message is clear. The BJP will play every card to enhance its footprint in Kerala. If the politics of polarisation needs to be resorted to, so be it. But polarisation does not happen in a vacuum; a context is necessary. The Communist Party of India (Marxist) rule has created a fertile ground for deep disaffection among large sections of the populace in the state and the BJP (along with the RSS which has had a strong presence for years) is set to exploit the situation.

Amit Shah claimed that more than 84 BJP-RSS workers had been killed in Kannur alone since 2001 by Left-supported individuals and organisations. One can quibble over the figure or the counter-claim that right-wing activists too have participated in political violence. But there cannot be a denial of the ground reality that the major victims have been the Rightists.

The Jan Raksha Yatra is arguably the BJP’s most determined effort so far in Kerala.

The BJP believes that by ratcheting up public sentiment against such killings and other forms of violence, it can eventually create a conducive electoral environment in its favour. That is to be seen; for now, State Assembly elections are far away. But the Lok Sabha poll will be held in less than two years and the party hopes to harvest some advantage from its counter-aggression. To that end, the Jan Raksha Yatra is, arguably, the BJP’s most determined effort so far in Kerala.

The Marxists have been dismissive of their opponent’s drive, and they have been especially critical of the Uttar Pradesh Chief Minister’s presence, advising him to mend governance in his home state before condemning the Left rule in Kerala. But there is no doubt that the Left is worried.

Unlike the BJP which is ruling most parts of the country either on its own or with the help of allies, the Left Front, and especially the CPI (M), is facing an existential crisis. It has been driven out from its one-time stronghold, West Bengal, by Mamata Banerjee’s Trinamool Congress. This was bad enough, but worse has followed. For all practical purposes, it’s not even the main opposition there; the BJP has occupied that spot. Given that it has been marginalised in a state which it once ruled for three uninterrupted decades, the CPI (M)’s salvation lies in Kerala where, in any case, it cannot presume invincibility since the Congress has been breathing down its neck. But the Congress is a friendly opposition when compared to the BJP.

The BJP’s game plan is simple enough. Exploit the anger among the people over political violence against its people and the larger Sangh family, attribute such violence to the Marxists’ ideology of intolerance, link the incidents to minority appeasement politics of the Left, and arouse passions in the name of majority-victimhood. The more it can do this the more it would push the Left into the anti-majority-community trap. Yogi Adityanath is a perfect candidate to further this strategy in the deep south. He is charismatic and a crowd-puller. It helps that he is also considered a ‘Hindu mascot’.

If the BJP manages to enhance its presence in Kerala, it will be as much due to its perseverance as it will be on account of the Marxists’ obstinacy to change with the times.

There is something to be said in favour of striking when the iron is hot. Not only is the CPI (M) battling for political relevance, but it has also been facing embarrassment from within. A gentleman named Ritabrata Banerjee has been doing his bit in this regard. Once the blue-eyed boy of the Marxists and a Rajya Sabha MP, the highly visible Banerjee was expelled from the CPI (M) last month for “grave anti-party activities”. He claimed to have fallen foul with the senior leadership after he began to speak out in party forums against the ‘Kannur cabal’ comprising among others, Kerala Chief Minister Pinarayi Vijayan and senior leader Kodiyeri Balakrishnan.

In interviews to television channels, Banerjee gleefully tore into the Marxists, saying that he had been targeted by the party leaders for, among other things, saying “Bharat Mata ki Jai”. He added that certain party leaders whose wish prevailed had problems with his lifestyle — including the apple watch he wore and the foreign trips he undertook!

There is of course little need to make a martyr out of him or take all that he has said as unadulterated truth. Nonetheless, he seems to have underlined the basic problems the Marxists are confronted with, and are increasingly failing to effectively address: That the CPI (M) has lost its connection with the aspirations and demands of the new voter who not just abhors retributive politics but also frowns at dated ideological positions and defers with the party on issues of ‘nationalism’. If the BJP manages to enhance its presence in Kerala, it will be as much due to its perseverance as it will be on account of the Marxists’ obstinacy to change with the times.

There are two primary reasons for the BJP’s focus on Kerala. The first is simply that it’s a hard nut to crack — and Amit Shah enjoys nothing better than meeting such challenges head-on — even if it entails the use of techniques in the book and outside of it. In southern India, the party has a fighting chance in Karnataka where the Assembly election is due next year. It rules in alliance in Andhra Pradesh, and is contemplating various combinations to unlock Tamil Nadu. But whereas it’s at the mercy of regional allies, both current and potential, to be relevant elsewhere in the south, in Kerala it hopes to be a dominant player, even if it stitches deals with regional outfits.

BJP may yet have a long road to traverse in Kerala.

The second reason stems from its own electoral performance in the past few years. In the 2016 Assembly election, the BJP-led NDA received over 14 per cent of the votes; it won one seat; and finished second in six others. Compare these to the five per cent vote-share in 2001, under five per cent in 2006, six per cent in 2011 — and a little less than 11 per cent in the 2014 Lok Sabha poll, and the cause for the BJP’s optimism becomes obvious. A CSDS-Lokniti survey done for a leading national daily soon after the last Assembly poll informed that the BJP had cut into the support base of both the Left and the Congress. Interestingly, the party also managed to win over a small segment of the Christian votes.

While these should cheer, and have cheered, the Rightist party and its supporters, the BJP may yet have a long road to traverse in Kerala. The moot question is: Will the party resort to dangerous social divisions to succeed electorally or moderate its stance and bank on inclusivity?