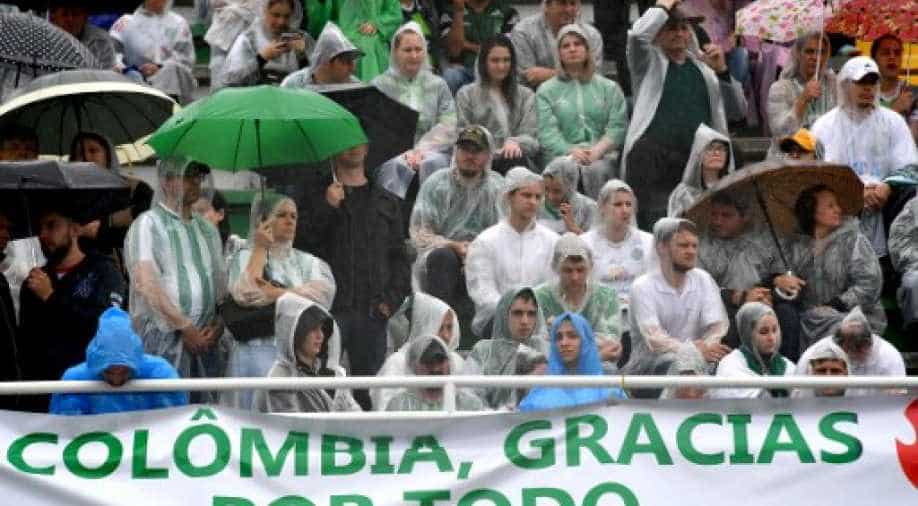 People attend under the rain the funeral of the members of the Chapecoense Real football club team killed in a plane crash in Colombia. Photograph:( AFP )

South American football confederation CONMEBOL agreed Monday to award the Copa Sudamericana to Brazilian club Chapecoense, whose team was wiped out in a plane crash while heading to the final.

The body issued a statement announcing the posthumous honor to the previously unsung club, which was having a fairy tale season until the disaster a week ago.

"We were sure that 'Chape' would be champions. It is a beautiful tribute," he told a news conference.

The charter plane flying the team to the biggest match in its history ran out of fuel and crashed into the mountains in northwestern Colombia.

A total of 71 people died -- most of the club members, including players, management and staff. Three players, two crew members and a journalist survived.

The side was heading to play the first leg of the Copa Sudamericana final against Colombian club Atletico Nacional in the city of Medellin.

Nacional responded to the crash by calling for Chapecoense to be granted the Copa Sudamericana, the second highest club football title in South America.

The Paraguay-based confederation said Monday it had heeded Nacional's request in deciding to hand the title to Chapecoense.

"CONMEBOL awards the title for the 2016 Copa Sudamericana championship to Chapecoense," including the $2 million in prize money, the confederation said in a statement.

"There is no greater demonstration of the spirit of understanding and fair play... than the consideration and respect shown by Atletico Nacional to its brothers in ChapecoenseFootball Club," the statement said.

The small Brazilian city of Chapeco held a massive funeral on Saturday for its team after the victims' coffins arrived home, each draped in the club's green and white flag.

A minute's silence for the team was scheduled to be held before every Champions League and Europa League game this week.

Chapeco awoke meanwhile to the steep task of rebuilding a top-flight team from virtually nothing.

"We have lost practically all our assets," said Tozzo last week.

He took over from president Sandro Pallaoro, who died in the crash.

"After everything we have achieved, now we have to start again from scratch," Tozzo said.

"We will have to start to think, because we do not have 11 players to put on the field.

"We will need a great deal of help from the Brazilian Football Federation and the broadcaster Globo," which owns the rights to screen the matches, he added.

Including the title award and winnings from earlier rounds, Chapecoense will take home just under $4 million from the tournament.

By taking the Sudamericana title, Chapecoense will be allowed to compete next season in the region's top club tournament, the Copa Libertadores.

They will also face Atletico Nacional in the Recopa Sudamericana, a fixture between the title-holders of the Sudamericana and Libertadores cups.

Chapecoense said 13,000 people had applied in just two days for membership of the club, which previously had just 9,000 members.

Other Brazilian football teams have offered to farm out their players to Chapecoense.

Ten of the team's players did not travel on the doomed flight. The club also has an under-20 squad with potential new first-team players.

Italian champions Torino took three decades to win a trophy again from an air crash that killed 18 of its players in 1949.

In England, Manchester United waited a decade to recover fully by winning the European Cup following the Munich air disaster in 1958 that killed 23 people, including eight players.