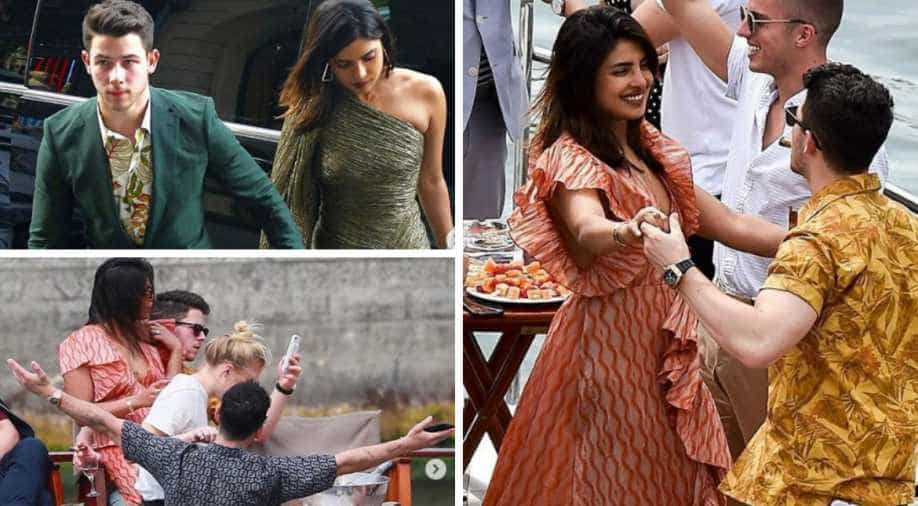 The actor revealed that she was shooting for her upcoming Bollywood movie 'The Sky Is Pink' four days before their wedding and that things got emotional.

Global icon Priyanka Chopra recently revealed that she moved her husband Nick Jonas to tears shortly before they tied the knot last year.

While attending the Toronto International Film Festival, the 37-year-old star shared that her acting chops made Nick cry, reported People.

The actor revealed that she was shooting for her upcoming Bollywood movie 'The Sky Is Pink' four days before their wedding and that things got emotional one day when the singer visited the sets of the film.

"It's so funny because I was filming this until at least four days before my wedding," Priyanka told People, adding that her fellow producers, as well as director Shonali Bose, were "so accommodating" that they created a "wedding approvals room" for the couple while they were on location in Delhi.

On the last day of shooting before their wedding, Shonali shared that they had invited Nick to set for a champagne and cake celebration.

"But he came a little early and we were out in the dark and she was doing a very, very intense scene and I heard a sniff and I suddenly turned and there was Nick standing next to me and he was just crying to see her be emotional. It was just the sweetest thing," Shonali said.

"She goes, you made your husband cry, this is a great scene. It was really cute," Priyanka added.

Priyanka, who is also co-producing the movie, shared that she has a special relationship with the film, which tells the true story of a couple, played in the movie by her and Farhan Akhtar, who lose their daughter to pulmonary fibrosis, a serious immune disease.

"It's extremely special. Everyone has lost someone in their lives," the 'Quantico' star said.

Priyanka, who lost her father due to cancer six years ago, added that the film looks at how people can choose "to celebrate their lives instead of mourning their deaths."

"I didn't accept my father's death. I went to work four days later, I didn't think about it talk about it," she said.

"When Shonali came to me with this movie, as an actor this is personal. I just knew what she would feel. Even though I'm not a mother and haven't had a child, I just sort of knew," Priyanka added.

'The Sky Is Pink' marks the Bollywood comeback of Priyanka after a hiatus of almost three years.

It is co-produced by Priyanka, Ronnie Screwvala and Siddharth Roy Kapur, and will hit the big screens on October 11.