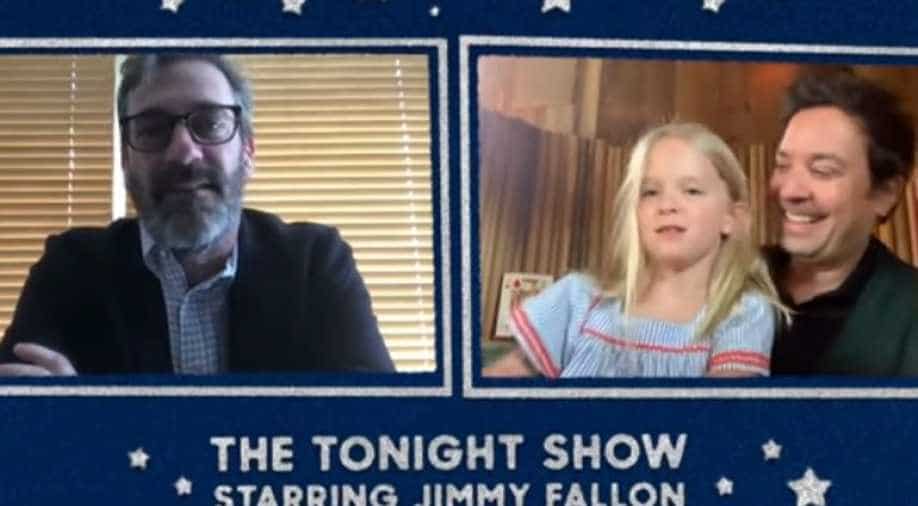 It seems like late-night television hosting runs in American comedian Jimmy Fallon`s family. According to the Newsagency, during Friday's episode of 'The Tonight Show', filmed remotely, the 45-year-old comedian spoke with actor Jon Hamm to discuss the upcoming 'Unbreakable Kimmy Schmidt' interactive special on Netflix.

While discussing the show, a child`s voice can be heard saying "Hi, Daddy". To which the 49-year-old actor said, "Uh-oh, Special guest star!" "Where's mom?" asks Fallon`s 6-year-old daughter Winnie as she enters the frame.

Winnie held up the colouring book she was carrying, opened it up to a nearly complete picture of a pig to show off to the camera.

She said pridefully, "I`m working on this one, I just need to do the background."Hamm played along, asking Winnie to find various animals in her book, including a chicken.

After Winnie displayed two chickens to the camera, Fallon ushered her away, saying, "all right, bye, chicken''."I'll see you later, chicken," said Hamm.

Winnie could be heard yelling "I`m not a chicken!" from off-camera. Hamm`s `Unbreakable Kimmy Schmidt: Kimmy vs the Reverend` features on Netflix on May 12.