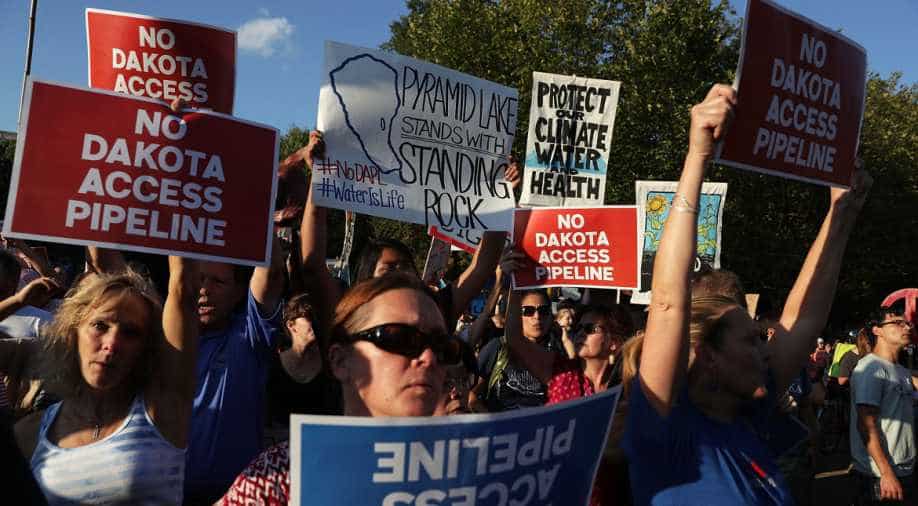 Demonstrators protest against the Dakota Access pipeline in front of the White House, Washington DC, September 13. Photograph:(Getty)
Follow Us

Since March, Standing Rock Sioux Tribe have protested in Cannon Ball, North Dakota, to protest the building of a proposed pipeline near their reservation that they say threatens to pollute the nearby river and endanger sacred land.

It's drawn attention global attention since for being a near perfect convergence of disasters rolled into one.

The story encompasses everything from the US government ignoring landright claims to concerns over climate change, fracking, and it's all enforced by a militarized police acting as, essentially, muscle for Big Business. It is fundamentally about the government's indifference to Sioux's basic health and legal rights.

The efforts to oppose the Dakota Access Pipeline has reverberated around social media in the form of the hashtag, #NoDAPL. Also, more than a million people from around the world have logged onto Facebook and "checked in" to the Standing Rock Indian Reservation page, to show solidarity with the Sioux.

NPR reports that originally, this was intended to confuse police, who were said to be using people's Facebook location to track activists protesting the pipeline, which turned out to be false.

The Sioux are literally being forced at gunpoint to accept ecological risks that North Dakota's white residents refused.

As Kelly Hayes writes in Truthout, the pipeline was originally proposed to run through Bismarck, North Dakota, a community over 90 per cent white. But the people of Bismarck objected to the risks the pipeline posed to the safety of their drinking water, so the government redirected the pipeline onto treaty land instead.

Actually it's on unceded treaty land. Land that is held by force by the US in violation of international law. #NoDAPL pic.twitter.com/2BQ9MIXwPQ

Vox reports that activists claim the land actually belongs to the Natives under an 1851 Treaty that the government is ignoring. Instead police have arrested hundreds of protesters and attacked them with Tasers, pepper spray, sound cannons and attack dogs.

On October 20 alone, the National Guard and police driven in from six surrounding states arrested at least 117 people, and attacked protesters with flash grenades, bean bag launchers, and there were even reports of the use of live ammunition.

Meanwhile bulldozers have already started tearing into the ground to make way for the pipeline, that will stretch underground for over 1,100 miles and cost $3.4 billion.

The conversation centres on "tribal sovereignty". The US government is treating the Sioux like they do not exist, rather than as a fellow government body entitled to legal rights, let alone human decency.

Lest this sound oversimplified or hyperbolic, please watch the police, literally armed with US army weapons, interact with completely unarmed protesters and see for yourself if this makes sense: