Venezuelan women lose access to contraception, and control of their lives 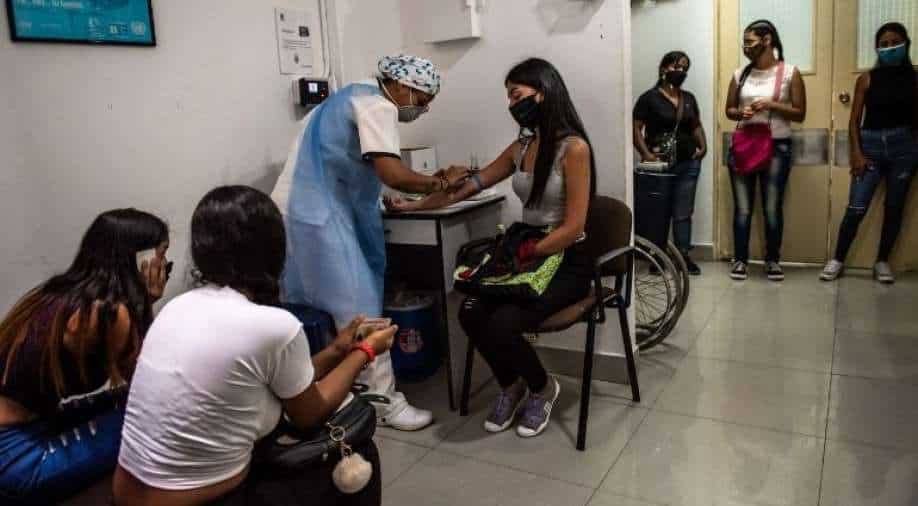 Women at Plafam, a nonprofit women’s health clinic, in Caracas, Venezuela, Dec. 4, 2020. Affordable birth control has disappeared, pushing many women into unplanned pregnancies at a time when they can barely feed the children they already have. (Meridith Kohut © 2021 The New York Times) Photograph:( The New York Times )

Millions of women are no longer able to find or afford birth control, pushing many into unplanned pregnancies at a time when they can barely feed the children they already have

The moment Johanna Guzmán, 25, discovered she was going to have her sixth child, she began to sob, crushed by the idea of bringing another life into a nation in such decay.

For years, as Venezuela spiraled deeper into an economic crisis, she and her husband had scoured clinics and pharmacies for any kind of birth control, usually in vain. They had a third child. A fourth. A fifth.

Already, Guzmán was cooking meager dinners over a wood fire, washing clothing without soap, teaching lessons without paper. Already, she was stalked by a fear that she could not feed them all.

And now another child?

As Venezuela enters its eighth year of economic crisis, a deeply personal drama is playing out inside the home: Millions of women are no longer able to find or afford birth control, pushing many into unplanned pregnancies at a time when they can barely feed the children they already have.

Birth control pills cost more than twice as much, roughly $11 a month, while an IUD, or intrauterine device, can cost more than $40 — more than 25 times the minimum wage. And that does not include a doctor’s fee to have the device put in.

With the cost of contraception so far out of reach, women are increasingly resorting to abortions, which are illegal and, in the worst cases, can cost them their lives.

The situation is a major departure from what Venezuela’s government once promised its women and girls. Hugo Chávez, the father of the country’s socialist-inspired revolution, declared that his government would grant women what others had not: full and equal participation in society.

Chávez brought women into the halls of power and enshrined in the Constitution the right to “decide freely” how many children a couple wished to have. In a region where abortion is largely banned, he stopped short of legalizing the procedure. But birth control was subsidized and widely available.

Chávez and his successor, President Nicolás Maduro, publicly declared themselves to be feminists.

But as Maduro’s grip on the country has hardened into authoritarian rule, Venezuela’s economy has collapsed under the weight of corruption, mismanagement and U.S. sanctions.

The nation that was once Latin America’s wealthiest is mired in a crisis economists have called the world’s worst in decades, outside of war, with its population suffering from runaway inflation and widespread hunger.

And Venezuelans now face a health system so broken that it can no longer reliably provide basic contraception. Today, amid the collapse of the country’s public health system, birth control is nearly absent from government clinics and available at private pharmacies only at prohibitive prices.

The result has been life-changing for women, who shoulder the vast majority of child care responsibilities, just as the crisis has greatly expanded the challenge of being a parent.

Many women who grew up believing that Chávez’s political movement, known as Chavismo, would springboard them out of poverty, offering them education and career opportunities, now face the task of raising four, six or 10 children at a time when the basics of family care — food, soap, diapers — arrive intermittently or not at all.

Anitza Freitez, a demographer with the Universidad Católica Andrés Bello in Caracas, said this dynamic could shape the country for decades, creating “a vicious circle of poverty.”

As Venezuela’s maternity wards fell apart, maternal deaths surged 65% between 2015 and 2016, according to the country’s health ministry.

And then the government stopped releasing data.

Fexsibel Bracho was 24 and the mother of three when she sought out a clandestine clinic to end a pregnancy in January. The procedure, performed with a hook, punctured her uterus. She died of a hemorrhage Feb. 2.

“She didn’t have money for birth control,” said her mother, Lucibel Marcano, 51, who cared for Bracho in her final hours, watching her daughter’s face lose color.

Representatives of the country’s health and women’s ministries did not respond to letters or emails requesting interviews.

When Chávez was elected president in 1998, he inherited a system in which birth control was already widely available.

In his push to embrace women’s rights, he offered direct cash transfers to poor mothers and moved the women’s ministry into the executive branch.

“Without true liberation of women, full liberation of the people will be impossible,” Chávez said in 2009, “and I am convinced that a true socialist must also be a true feminist.”

But reproductive health was never a priority, something even his supporters recognize.

Chavismo, said Indhira Libertad Rodríguez, 45, a women’s rights activist and longtime supporter of Chávez, “has not overcome a bias against women as reproducers.”

As Venezuela’s economy — long buoyed by its vast oil reserves — began to tumble in 2014, the result of plummeting crude oil prices and poor financial management, the government’s purchasing power dove.

By 2015, contraceptives, once free at government hospitals and broadly affordable at private pharmacies, began to disappear. And women who could once plan their futures — thanks to contraception — began to lose control.

By 2018, oral contraceptives, implants and patches were nearly impossible to find in several major cities, according to a study by the reproductive rights coalition Equivalencies in Action.

Some couples began to ration or abstain from sex. Others tried to plan around a woman’s menstrual cycle. But it did not always work. And not everyone has a choice.

As the crisis has sharpened, many women say that abuse has, too, making it difficult for them to say no to a partner or to leave a relationship.

Guzmán delivered her sixth child, Yorkeinys, in April, when the country was in the grip of the pandemic and her husband, a mechanic, had been out of work for weeks. When she arrived home from the hospital, there were only lentils in the pantry, she said, and all of her children were hungry. She lapsed into a depression and spent 20 days in bed.

The plan she had nurtured since she was a child — to become a chemist — is indefinitely on hold.

As raising children in Venezuela has become increasingly difficult, the number of women seeking abortions has surged, according to interviews with health professionals and community workers across the country.

Before the economic crisis, some doctors would perform abortions illegally in safer facilities. But about half the country’s physicians, some 30,000 people, have left in recent years, according to the Venezuelan Medical Federation, driving women to makeshift clinics.

In the shadows, some women, and a few men, have become part of an expanding group of underground abortion counselors, mostly trying to educate women in how to find and use misoprostol, a drug used legally in other countries to induce abortion.

The idea is to keep women away from shady abortion purveyors who charge high prices for possibly deadly operations.

Faldas-R, an activist group that runs an abortion support hotline, reported a 40% rise in calls between 2018 and 2019.

Women arrested for ending their pregnancies, and the practitioners who help them, can spend years in prison.

But even with guidance, the experience can be excruciating, often involving a frantic search for the $150 it costs to buy the pills, followed by a hunt for a safe place to hide away to bleed for a few hours.

One night in late 2019, Jessika, 21, a university student, had an abortion in an auto parts warehouse, accompanied by two friends.

Jessika had never been able to afford birth control. She said she got pregnant after an assault by her boyfriend and knew she could not support a child.

“In the country we live in,” she said, “a woman is not afforded the luxury of one more mouth to feed.”

Through her contacts, she reached one of the counselors, who gave her instructions and wished her luck.

Seven weeks pregnant, she bought misoprostol online from a man who called himself “José Vende Todo,” or “José Who Sells Everything.”

She knew her mother would not approve, and that she could not have the abortion at home. So she went to the warehouse, on loan from a friend, holing herself up in a white-walled office with a couch and a single window, keeping it closed so no one would hear her scream.

She took the first two pills at 7 p.m. and the second dose two hours later. Soon, she doubled over in pain and began to bleed profusely. Her legs shook, she cried out, and then she fainted.

Not all abortions with misoprostol are this painful or risky. Doctors recommend that women take misoprostol with another drug, mifepristone, which prepares the body for the process, making the procedure easier.

But mifepristone is difficult to find in Venezuela, and so most women do it the hard way.

When Jessika came to, her friends urged her to go to the hospital.

“Don’t take me anywhere,” she said.

She was terrified of the police.

Afterward, she spent weeks replaying the events of the night.

“You say to yourself, ‘Well, this happened, but it could have been worse. It could have gone differently. I could have died in the process, but I didn’t, and it’s OK,’” she said.

In the absence of other help, a few nonprofit organizations have become critical resources for women, offering low-cost or free contraception. Most are supported by international funds.

At the five clinics run by one of those organizations, Plafam, the waiting rooms are always packed. Women sometimes sleep outside, desperate to be among those who receive free birth control implants on distribution days.

Bracho, the young woman who died after a botched abortion, never reached Plafam or one of the counselors.

Instead, she went to the makeshift clinic alone, without sharing her plan with her mother or sister.

Afterward, her mother struggled to understand her daughter’s decision.

“If I could turn back time,” she said, “I would talk to her and tell her not to.”

“It’s very difficult to be a woman in Venezuela,” she said. “I would have done the same.”