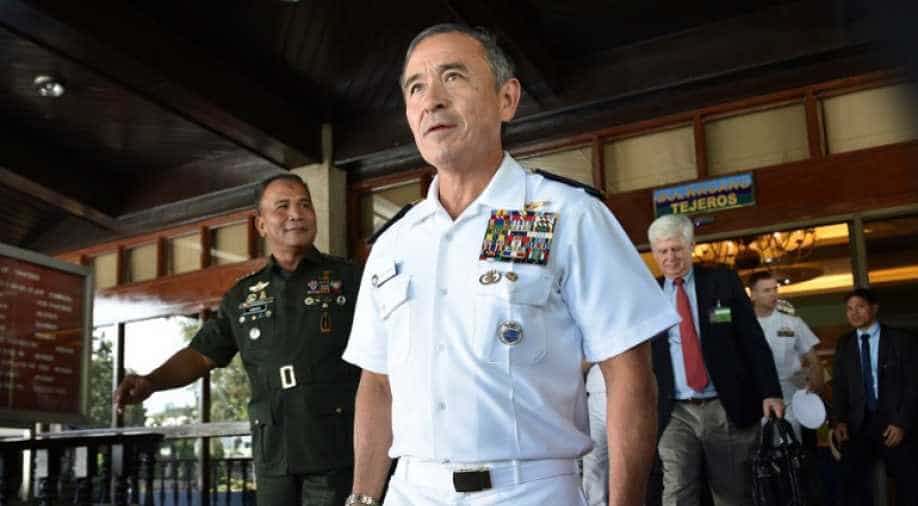 The United States estimates Beijing has added more than 3,200 acres (1,300 hectares) of land on seven features in the South China Sea over the past three years, building runways, ports, aircraft hangars and communications equipment. Photograph:( AFP )

The United States is ready to confront China should it continue its overreaching maritime claims in the South China Sea, the head of the US Pacific fleet said on Wednesday, comments that threaten to escalate tensions between the two global rivals.

China claims most of the resource-rich South China Sea through which about $5 trillion in ship-borne trade passes every year. Neighbours Brunei, Malaysia, the Philippines, Taiwan and Vietnam also have claims.

The United States has called on China to respect the findings of arbitration court in The Hague earlier this year which invalidated its vast territorial claims in the strategic waterway.

But Beijing continues to act in an "aggressive" manner, to which the United States stands ready to respond, Admiral Harry Harris, head of the US Pacific Command, said in a speech in Sydney.

"We will not allow a shared domain to be closed down unilaterally no matter how many bases are built on artificial features in the South China Sea," he said. "We will cooperate when we can but we will be ready to confront when we must."

The comments threaten to stoke tensions between the United States and China, already heightened by President-elect Donald Trump's decision to accept a telephone call from Taiwan's president on December 2 that prompted a diplomatic protest from Beijing.

The United States estimates Beijing has added more than 3,200 acres (1,300 hectares) of land on seven features in the South China Sea over the past three years, building runways, ports, aircraft hangars and communications equipment.

In response, the United States has conducted a series of freedom-of-navigation operations in the South China Sea, the latest of which came in October.

The patrols have angered Beijing, with a senior Chinese official in July warning the practice may end in "disaster".

Harris said it was a decision for the Australian government whether the U.S. ally should undertake its own freedom-of-navigation operations, but said the United States would continue with the practice.

"The US fought its first war following our independence to ensure freedom of navigation," said Harris. "This is an enduring principle and one of the reasons our forces stand ready to fight tonight."