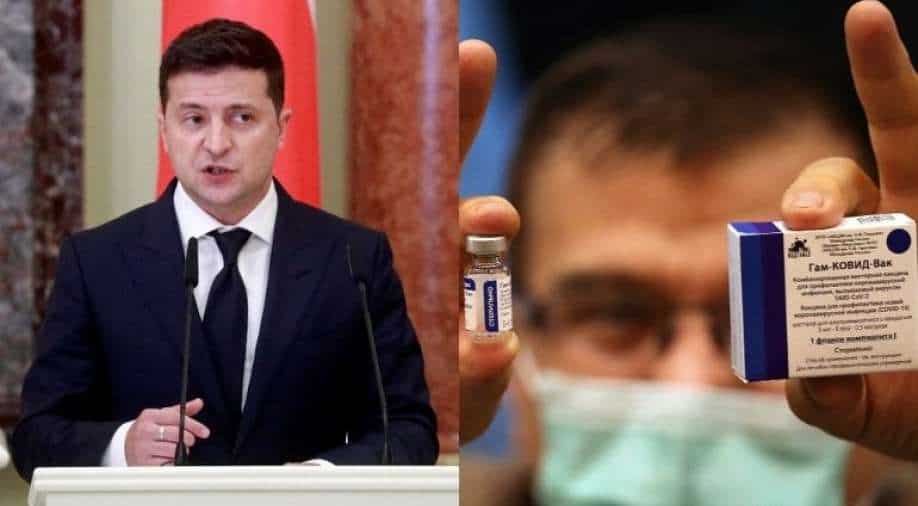 File photos of Ukrainian President Volodymyr Zelenskiy and Sputnik V coronavirus vaccine, which has been banned in the country. Photograph:( AFP )

A resolution passed by the government on February 8 and posted on its website on Wednesday banned the registration of vaccines from 'aggressor states', a designation Ukraine has applied to Russia since 2015

Ukraine has banned coronavirus vaccines produced by rival Russia despite struggles to launch its vaccination campaign.

A resolution passed by the government on February 8 and posted on its website on Wednesday banned the registration of vaccines from 'aggressor states', a designation Ukraine has applied to Russia since 2015.

Ukraine has been fighting separatists backed by Russia in its Donetsk and Lugansk regions since 2014 following Moscow's annexation of the Crimean Peninsula.

The ban on Russian vaccines came despite criticism of President Volodymyr Zelensky for failing to source Western-made jabs. Not a single dose of any vaccine has yet arrived in the ex-Soviet country.

Zelensky said this week that Ukraine, one of the poorest countries in Europe, would begin the first phase of the vaccination campaign later this month.

The country of some 40 million is awaiting delivery of eight million doses promised under the United Nations' Covax programme and up to five million doses of the Chinese CoronaVac jab.

It has also secured 12 million doses of vaccines developed by AstraZeneca and Novavax, but that is still not enough to meet the country's needs.

On Wednesday, Ukraine said it launched an investigation into the country's purchasing of coronavirus vaccines, highlighting the country's struggle to end systemic graft.

Sputnik V has, meanwhile, been rolled out in the breakaway regions in eastern Ukraine that are controlled by Kremlin-backed separatists.

Ukraine has recorded more than 1.2 million coronavirus cases and more than 24,000 deaths.