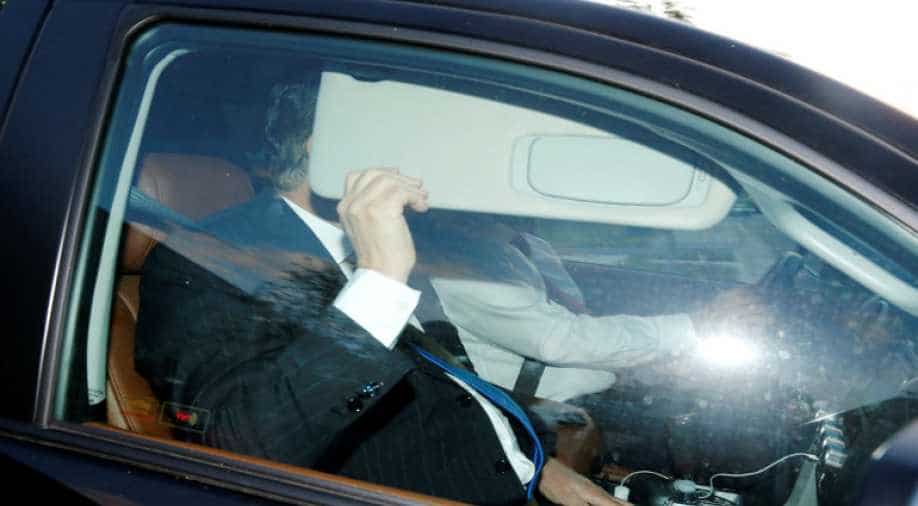 Paul Manafort hides behind his car visor as he leaves his home in Alexandria, Virginia, yesterday morning. Photograph:( Reuters )

A third former Trump adviser, George Papadopoulos, pleaded guilty in early October to lying to the FBI, it was announced on Monday.

It was a sharp escalation of U.S. Justice Department Special Counsel Robert Mueller's five-month-old investigation into alleged Russian efforts to tilt the election in Trump's favour and into potential collusion by Trump aides.

Manafort, 68, a longtime Republican operative, and Gates were arraigned at a federal courthouse in Washington.

Both men pleaded not guilty to the charges against them in a 12-count indictment, ranging from money laundering to acting as unregistered agents of Ukraine's former pro-Russian government.

The developments in the Mueller probe weighed on the U.S. dollar, which slipped 0.5 percent against a basket of currencies.

Mueller's investigation and others by congressional committees into alleged Russian efforts to influence the election have cast a shadow over Trump's first nine months in office.

Neither Trump nor his campaign was mentioned in the indictment against Manafort and Gates. The charges, some going back more than a decade, centre on Manafort's work for Ukraine.

The indictment includes accusations of conspiracy against the United States, failure to report foreign bank accounts to the U.S. government and conspiracy to launder money, a count that carries a 20-year maximum prison sentence.

A White House spokeswoman said the indictment had nothing to do with Trump or his campaign and showed no evidence of collusion between the campaign and Russia.

"We've been saying from Day One there's no evidence of Trump-Russia collusion, and nothing in the indictment today changes that at all," spokeswoman Sarah Sanders told a news briefing.

Downing accused Mueller of using a "novel" legal theory to prosecute Manafort under a law requiring lobbyists to register with the Department of Justice when they are doing work for a foreign government.

Renato Mariotti, a former federal prosecutor in Chicago, said the charges against Manafort could put pressure on him to cooperate with the Russia investigation.

"If I were the defence lawyer, I'd be looking into cooperating,” he said.

In a development directly related to Trump's 2016 election campaign, it emerged on Monday that Papadopoulos, a former campaign adviser, pleaded guilty earlier this month to making false statements to Federal Bureau of Investigation agents.

Mueller's office said Papadopoulos lied to FBI agents about the timing of contact between him and a professor in London who claimed to have information that would hurt Democratic presidential candidate Hillary Clinton.

Papadopoulos, a little-known former foreign policy adviser in the campaign, made a plea bargain which stated that he has since "met with the Government on numerous occasions to provide information and answer questions," according to a court document.

White House spokeswoman Sanders played down Papadopoulos' campaign role, saying it was "extremely limited" and that he was a volunteer.

"He asked to do things (and) he was basically pushed back or not responded to in any way," she said.

Manafort ran the Trump campaign from June to August of 2016 before resigning amid reports he might have received millions of dollars in illegal payments from a pro-Russian political party in Ukraine.

Trump on Monday reiterated his frustration with the Mueller probe, which he has called "a witch hunt." Moscow also denies the allegations.

"Sorry, but this is years ago, before Paul Manafort was part of the Trump campaign. But why aren't Crooked Hillary & the Dems the focus?????," Trump wrote on Twitter, referring to Clinton.

Mueller has been investigating Manafort’s financial and real estate dealings and his prior work for a political group, the Party of Regions, which backed former pro-Kremlin Ukrainian President Viktor Yanukovich.

Both Manafort and Gates generated tens of millions of dollars of income from Ukraine work and laundered money through scores of U.S. and foreign entities to hide payments from American authorities, the indictment said.

They concealed from the United States their work and revenue as agents of Ukrainian political parties and used their wealth to lead a "lavish lifestyle" without paying taxes on the income, it said.

Prosecutors said Manafort spent almost $1 million on eight rugs in two years and more than $1.3 million on clothes from shops in Beverly Hills, California, and New York City. They also said he had been making payments on four Range Rovers and a Mercedes-Benz.

Gates was a longtime business partner of Manafort and has ties to Russian and Ukrainian oligarchs. He also served as deputy to Manafort during his brief tenure as Trump's campaign chairman.

"The rule of law is paramount in America and the investigation must be allowed to proceed unimpeded. The president must not, under any circumstances, interfere with the special counsel’s work in any way," Schumer said.