Trump in Saudi Arabia: US president calls for isolation of Iran 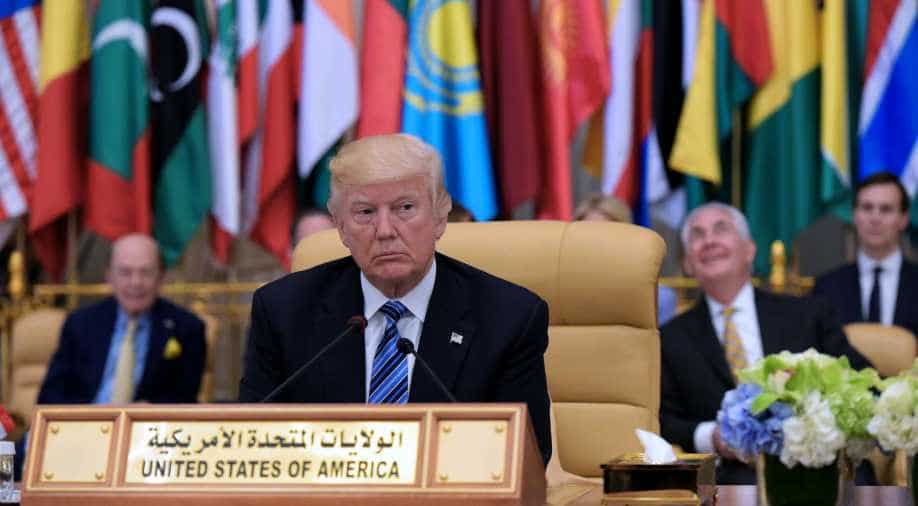 US President Donald Trump told Muslim leaders he brings message of 'friendship, hope and love'. He said this when he attended the Arabic Islamic American Summit at the King Abdulaziz Conference Center. Photograph:( AFP )

US President Donald Trump made a 30-minute speech on Sunday in the Saudi Arabian capital Riyadh on his first foreign visit since taking office.

Trump's speech, preceded by a traditional Koranic reading, held Iran responsible for global extremism, urged Arab and Muslim nations to freeze channels of funding for groups including the Islamic State and Hezbollah, and highlighted US and Saudi commitment to economic development, inter-faith peace and the fight against terrorism.

- On economic ties, Trump said some $400 billion in agreements signed this weekend with Saudi Arabia would create hundreds of thousands of jobs in both countries, and that he looked forward to cooperating in the future.

"This landmark agreement includes the announcement of a $110 billion Saudi-funded defence purchase. And we will be sure to help our Saudi friends to get a good deal from our great American defence companies, the greatest anywhere in the world. This agreement will help the Saudi military to take a far greater role in security and operations having to do with security."

- Trump praised the six-state Gulf Cooperation Council, specifically Saudi Arabia, for "blocking funders from using their countries as a financial base for terror, and for designating Hezbollah as a terrorist organisation, which they certainly are, this year."

- The president said Iran was responsible for training armed groups in the wars in Syria, Yemen and Iraq, but drew a clear distinction between the "richness and culture" of the Iranian people and the government in Tehran.

- On Iran's influence, Trump said: "The government that gives terrorists safe harbour, financial backing... It is the regime that is responsible for so much instability in that region. I am speaking of course of Iran. From Lebanon to Iraq to Yemen, Iran funds, arms and trains terrorists, militias and other extremist groups that spread destruction and chaos across the region" and calls for the destruction of Israel and death to America.

- On refugees, he praised Lebanon and Turkey for accommodating Syrians fleeing war at home: "This region should not be a place from which refugees leave but to which newcomers flock."

- Trump said Arab and Muslim countries had suffered the deadliest toll of radicalism: "Innocent blood soaked into the ancient ground... knows no religion, faith or tribe."

- He asked: "Behind every pair of eyes is a soul that yearns for justice and years for peace. Today billions of faces are now looking at us, waiting for us to act on the great questions of our time. Will we be indifferent in the face of evil?"

- Trump concluded with the "promise that America will not seek to impose our way of life on others but to outstretch our hands."