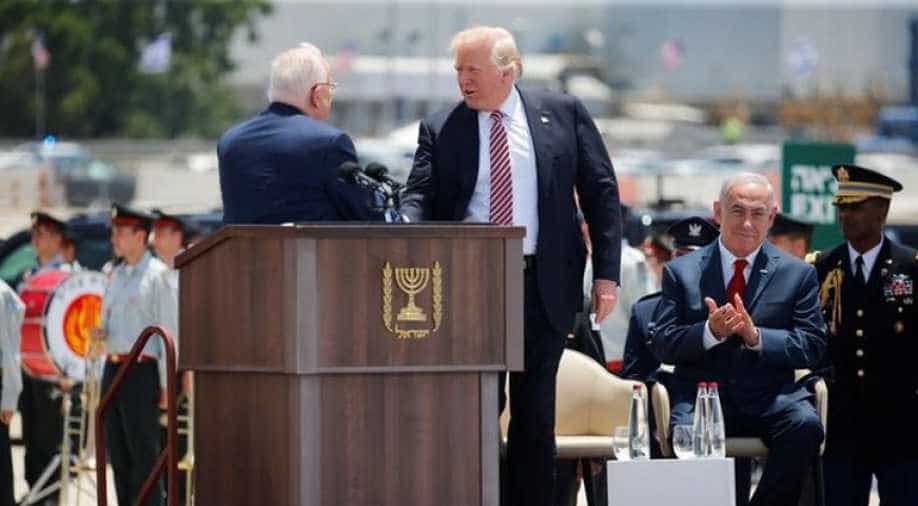 US President Trump shakes hands with Israel's President Reuven Rivlin as PM Benjamin Netanyahu claps during a ceremony to welcome Trump at Tel Aviv on May 22. Photograph:( Reuters )

US President Donald Trump arrived in Israel on Monday to seek ways to achieve Israeli-Palestinian peace, speaking of a "rare opportunity" to bring stability to the turbulent region.

Trump's visit is part of his first trip abroad as president and follows an initial stop in Saudi Arabia, where he urged Islamic leaders to confront extremism.

It also comes as he contends with a raft of problems back home, including a special counsel investigating whether his associates colluded with Russia.

Security was extremely tight, with Israeli police deploying some 10,000 officers.

The alleys and passageways of Jerusalem's ancient Old City, which Trump will visit later in the day, were essentially under lockdown.

Trump landed in Tel Aviv on Monday afternoon, welcomed by officials including Israeli Prime Minister Benjamin Netanyahu as he walked along a red carpet ahead of a brief ceremony.

"On my first trip overseas as president, I have come to this sacred and ancient land to reaffirm the unbreakable bond between the United States and the state of Israel," Trump said.

He said later, "We have before us a rare opportunity to bring security and stability and peace to this region and to its people, defeating terrorism and creating a future of harmony, prosperity and peace. But we can only get there working together. There is no other way."

Ahead of talks with Netanyahu, Trump will tour two iconic sites in Jerusalem, a city holy to Muslims, Christians and Jews.

The first will be the Church of the Holy Sepulchre, built at the site where Christians believe Jesus was crucified, buried and resurrected.

Afterwards, he is expected to become the first sitting US president to visit the Western Wall, the holiest site where Jews can pray and located in east Jerusalem.

The Western Wall visit drew controversy before Trump even left Washington, when US officials declined to say whether it belonged to Israel.

"Jerusalem was and will always be the capital of Israel," Netanyahu said late Sunday, adding that the Western Wall "will always remain under Israeli sovereignty".

The status of Jerusalem is ultra-sensitive and has been among the most difficult issues in Israeli-Palestinian peace talks.

Ahead of their meeting, Netanyahu's security cabinet adopted a series of measures aimed at benefiting the Palestinian economy, moves seen as confidence-building measures requested by Trump.

They reportedly included new building permits for Palestinians in the part of the West Bank entirely under Israeli control, which occurs only rarely.

Most of the West Bank is under complete Israeli control and Palestinians face extremely long odds in being granted building permits in those areas, while Israeli settlement building has meanwhile continued.

He has spoken of his self-described deal-making prowess in declaring that the "ultimate deal" is possible, vowing "we will get it done".

"It is something that I think is frankly maybe not as difficult as people have thought over the years," Trump said when meeting Abbas in Washington earlier this month.

At that meeting, he said he would support a single state if it led to peace, delighting Israeli right-wingers who want to see most of the West Bank annexed.

On the Israeli side, Netanyahu heads what is seen as the most right-wing government in the country's history, and members of his coalition were elated with Trump's election.

Some even called for an end to the idea of a Palestinian state.

However, the United States remains Israel's most important ally, providing it with more than $3 billion in defence aid annually.