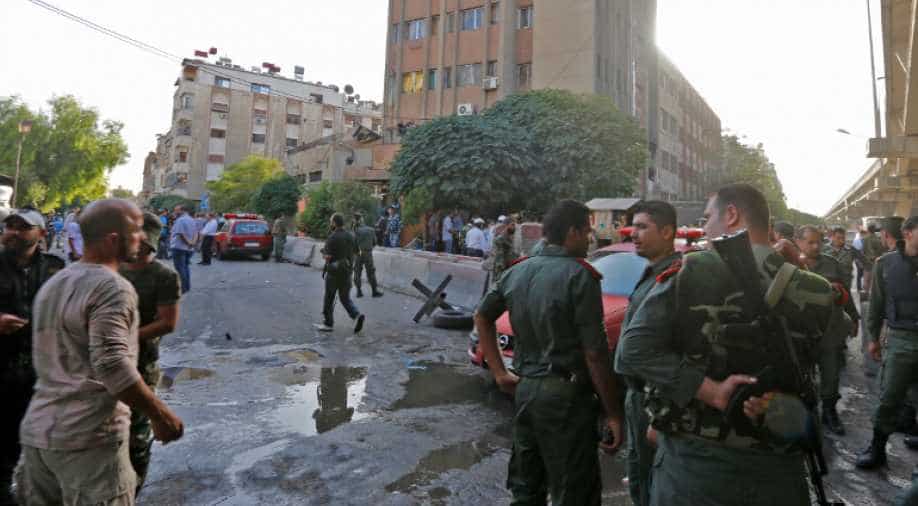 The site of a double suicide bomb attack which hit the al-Midan police station on October 2 in Syria's capital Damascus Photograph:( AFP )

Three suicide bombers blew themselves up near the main police headquarters building in Syria's capital Damascus on Wednesday, killing at least two people and leaving 10 wounded, the interior ministry said.

Two of the suicide bombers detonated their explosives in front of the police headquarters on Khaled Bin al-Walid street in central Damascus, the interior ministry said in a statement carried by state media.

"The terrorist suicide attackers tried to storm the police command headquarters... The guards opened fire on them, forcing them to blow themselves up before they entered the building and achieved their goals," it added.

Police surrounded the third attacker behind the building who also blew himself up, the statement said.

The interior ministry said one person had been killed and six injured in the attack.

It was the second time this month that suicide attackers targeted the police in Syria's capital after at least 17 people were killed in an October 2 attack on a police station in the southern district of Midan.

That attack was claimed by the Islamic State group, which said three of its fighters armed with guns, grenades, and explosives had targeted the station.

There was no immediate claim of responsibility for Wednesday's attack.

More than 330,000 people have been killed in Syria since the country's conflict began in March 2011, with anti-government protests.