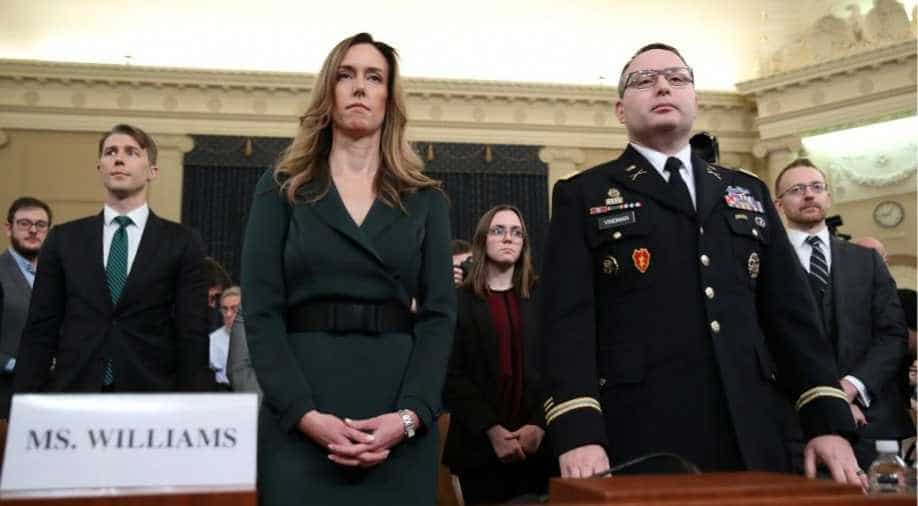 A White House official testified in the impeachment inquiry against President Donald Trump on Tuesday that a phone call the president made to ask Ukraine to investigate his political rivals was improper and denounced attacks on witnesses in the investigation.

The inquiry focuses on a July 25 phone call in which Trump asked Ukrainian President Volodymyr Zelenskiy to carry out two investigations that would benefit him politically including one targeting Democratic political rival Joe Biden. The other involved a debunked conspiracy theory embraced by some Trump allies that Ukraine, not Russia, interfered in the 2016 US election.

"It was inappropriate, it was improper for the president to request - to demand - an investigation into a political opponent, especially (from) a foreign power where there is at best dubious belief that this would be a completely impartial investigation and that this would have significant implications if it became public knowledge," Vindman told the committee.

He testified alongside Jennifer Williams, an aide to US Vice President Mike Pence, both of whom were among the U.S. officials who listened in on the July 25 call.

Vindman, an Iraq war veteran who appeared at the hearing wearing his Army uniform and medals, has been publicly criticized by Trump along with other witnesses. He told lawmakers that "character attacks" against public servants testifying in the impeachment inquiry were "reprehensible."

"It is natural to disagree and engage in spirited debate, this has been the custom of our country since the time of our Founding Fathers, but we are better than personal attacks," he told lawmakers.

In his prepared opening statement to the committee, he had referred to "vile character attacks" and said "we are better than callow and cowardly attacks," but did not use those words at the hearing.

Trump has attacked both Williams and Vindman on Twitter as "Never Trump" witnesses, a term to describe Republicans who oppose him.

A US official, speaking on the condition of anonymity, said Vindman had recently concerns over his personal security and the Army has been carrying out security assessments. The official said Vindman and his family could be moved to a military base if the security threat warrants such action but that has not yet occurred.

Vindman, whose family fled the Soviet Union and settled in the United States, sent out a message to his father from the witness seat.

"Dad, that I am sitting here today, in the US Capitol talking to our elected officials is proof that you made the right decision 40 years ago to leave the Soviet Union and come here to the United States of America in search of a better life for our family. Do not worry, I will be fine for telling the truth," Vindman testified.

Ahead of the call, Trump had frozen $391 million in US security aid approved by Congress to help Ukraine combat Russia-backed separatists in the eastern part of the country. Trump was seeking a Ukrainian investigation of Biden, a leading contender for the Democratic nomination to face Trump in the 2020 presidential election, and Biden's son Hunter, who had served on the board of a Ukrainian energy firm called Burisma.

Trump has denied wrongdoing and attacked the Democrats leading the inquiry.

Williams told the committee that Trump's call with Zelenskiy was unusual because "it involved discussion of what appeared to be a domestic political matter." She said the White House budget office had said Trump's acting chief of staff, Mick Mulvaney, had directed that $391 million in security aid to Ukraine be put on hold and that she never learned why the assistance was later released in September.

Democrats have accused Trump of using the frozen aid and Zelenskiy's desire for an Oval Office meeting as leverage to pressure a vulnerable U.S. ally to dig up dirt on political adversaries.

The investigation could lead the House to approve formal charges against Trump – known as articles of impeachment – that would be sent to the Republican-controlled Senate for a trial on whether to remove him from office. Few Republican senators have broken with Trump.

Representative Devin Nunes, the committee's top Republican and a close Trump ally, did not address the substance of the witness testimony about the president's actions in his opening statement on Tuesday but unleashed an attack on the media, calling journalists "puppets of the Democratic Party."

Representative Adam Schiff, the committee's Democratic chairman, noted Trump's criticism of Williams and of Marie Yovanovitch, the former U.S. ambassador to Ukraine who testified in the impeachment inquiry on Friday. Schiff also noted the "scurrilous attacks" on Vindman's character.

"I note that you have shed blood for America, and we owe you an immense debt of gratitude," Schiff told Vindman, who was awarded a Purple Heart medal for war wounds.

At one point, Schiff interrupted Nunes' questioning of Vindman that appeared to be aimed at revealing the identity of the intelligence community whistleblower whose complaint about Trump's July 25 call triggered the impeachment inquiry. The whistleblower's identity has remained a secret, but Trump and his allies have repeatedly attacked the individual.

"These proceedings will not be used to out the whistleblower," Schiff said.

Vindman referred to the two investigations that Trump had sought from Ukraine as "alternative false narratives," and noted that Russian President Vladmir Putin had promoted the notion that the Ukrainians had interfered in the 2016 U.S. election.