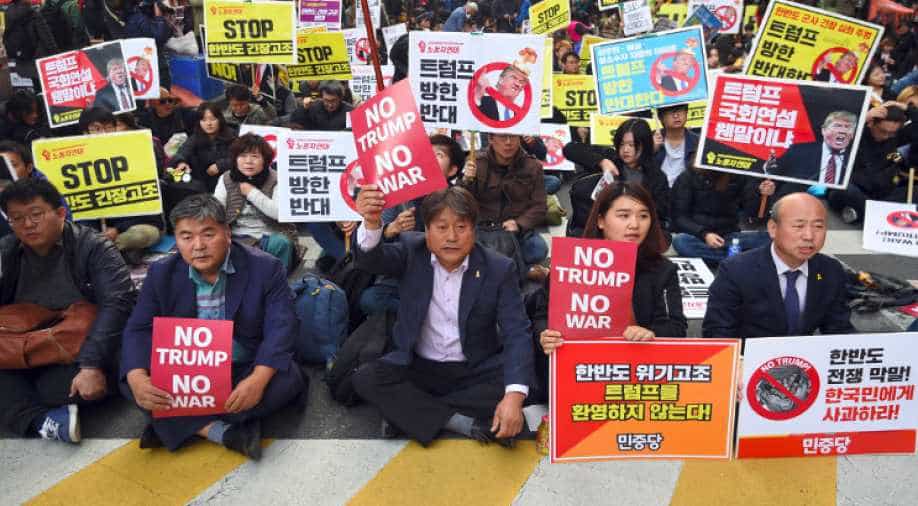 South Korean protestors hold up signs reading "No Trump, No war," during an anti-Trump rally in Seoul Photograph:( AFP )

"We oppose war! Negotiate peace!" the protesters chanted in central Seoul, waving banners and balloons emblazoned "Peace, not war" and "We want peace".

Thousands of South Koreans protested Sunday against an upcoming visit by Donald Trump and called for peace as the US President begins an Asian tour dominated by North Korea's nuclear programme.

Trump, who arrived in Tokyo on Sunday, is set to visit the South from Tuesday to Wednesday as part of his first Asian trip as head of state that also includes Vietnam, China, and the Philippines.

He is scheduled to hold a summit with President Moon Jae-In and visit a US military base, with all eyes on his message to the North and its leader Kim Jong-Un.

Tensions flared after Pyongyang staged a sixth atomic test in September and test-launched multiple missiles capable of reaching the US mainland, while Trump and Kim have traded colourful personal attacks.

South Korea is a key US ally and hosts 28,500 US troops but many of Trump's critics in the South see him as a warmonger whose recent war of words with Kim has heightened tensions on the flashpoint peninsula.

"We oppose war! Negotiate peace!" the protesters chanted in central Seoul, waving banners and balloons emblazoned "Peace, not war" and "We want peace".

Many slammed both Trump and Kim for heightening the risk of conflict.

"Trump and Kim... are using the current military standoff for their own political gain, while we South Koreans are trembling with fear of war!" one activist said on stage.

One mother whose son is serving the South's mandatory two-year army conscription accused the US leader of putting her son's life at risk.

"My heart stirs at every single word Trump says about North Korea," she said.

Organisers estimated the number of protesters at around 5,000.

Separately on Sunday a group of conservative activists held a rally to welcome Trump, urging Washington to deploy tactical nuclear weapons in the South to guard against threats from the North.

The latest standoff between Trump and Kim has raised concern among South Koreans, who have over decades grown indifferent to regular threats of attack from Pyongyang.

But some Trump advisers say US military options are limited because any armed conflict on the peninsula would be expected to cause huge casualties.

Seoul is home to 10 million people and only about 50 kilometres (30 miles) from the heavily-fortified border, within range of Pyongyang's artillery.