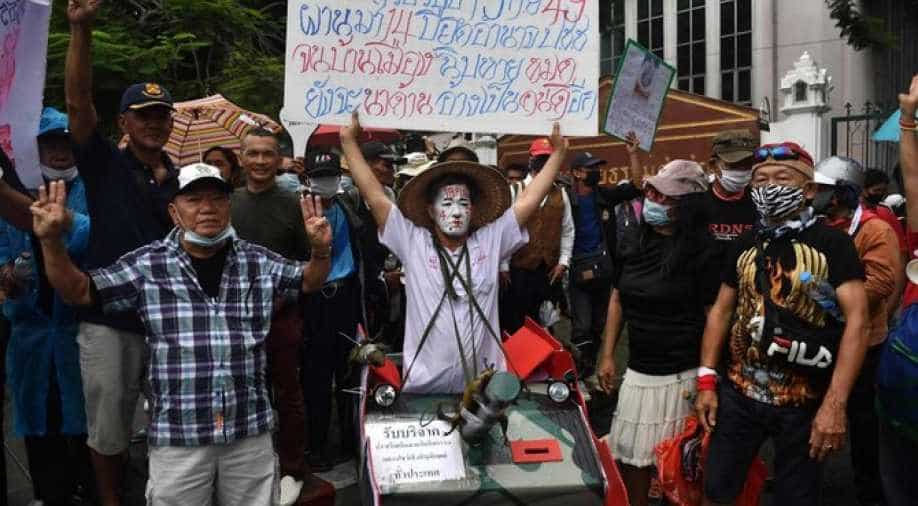 Thailand has seen near-daily gatherings of youth-led groups since mid-July demanding the resignation of Prayut, the former army chief behind the 2014 coup, and a complete overhaul of his administration.

Pro-democracy protesters took to the streets of Bangkok Saturday as a rally expected to draw tens of thousands of people kicked off calling for PM Prayut Chan-O-Cha to step down and demanding reforms to the monarchy.

Thailand has seen near-daily gatherings of youth-led groups since mid-July demanding the resignation of Prayut, the former army chief behind the 2014 coup, and a complete overhaul of his administration.

Some are also demanding reforms to the kingdom's ultra-wealthy and powerful monarchy -- a once-taboo topic in Thailand due to its tough royal defamation laws.

But the weekend's demonstration is organised by students of Bangkok's Thammasat University -- a group that has been among the most vocal about the royal family's role in Thailand.

A crowd of several hundred gathered before noon at the locked gates of the university, demanding to be let in. Protesters chanted "Down with dictatorship, long live democracy!" and "Prayut get out!"

"If you don't open, we will break in," protesters yelled, before forcing the gates open -- despite student leaders calling for calm -- allowing hundreds to flow into the campus.

The demonstration was later expected to move on to the historic Sanam Luang field in front of the royal palace, where protesters plan to spend the night.

"We are fighting for more democracy," prominent student activist Panusaya Sithijirawattanakul said on the eve of the protest.

"The plan is not to destroy the monarchy but to modernise it, to adapt it to our society."

On Sunday, demonstrators are expected to march to the nearby Government House -- a move authorities have warned against.

The show of force is expected to be the largest since the 2014 coup -- student activists are hoping for a turnout of more than 50,000 supporters.

Police said some 10,000 officers would be deployed around the area.

- Force to be reckoned with? -

A cycle of violent protests and coups has long plagued Thailand, with the arch-royalist military stepping in to stage more than a dozen putsches since the end of royal absolutism in 1932.

The latest wave of student-led demonstrations has largely been peaceful.

But unprecedented calls from some protesters for frank discussions about the monarchy have sent shockwaves through the kingdom.

King Maha Vajiralongkorn sits at the apex of Thai power, buttressed by the kingdom's military and billionaire clans, and commands a fortune estimated to be worth up to $60 billion.

The student demands include greater accounting of the palace's finances, the abolition of royal defamation laws and a call for the king to remain outside of politics.

They also want a rewrite of the 2017 military-scripted constitution, which they say tilted last year's election in Prayut's favour, and for the government to stop "harassing" political opponents.

So far, authorities have arrested more than two dozen activists, charging them with sedition before releasing them on bail.

The weekend demonstrations will prove a test for the pro-democracy movement, analysts say, which has gained momentum online thanks to the students' savvy use of social media.

"A critical mass would send a clear message that the protesters are a force to be reckoned with," said Thitinan Pongsudhirak of Chulalongkorn University.

Prayut has warned Thailand could be "engulfed in flames" if the movement goes too far.

But he vowed authorities would use "soft measures" on the protesters "because they are children".

The top-trending hashtag on Thai Twitter late Friday was "Sept 19, we take back the power of the people".

Around the world, Thais are expected to gather in solidarity, with weekend protests planned in a dozen countries, including Germany, Australia and the United States.