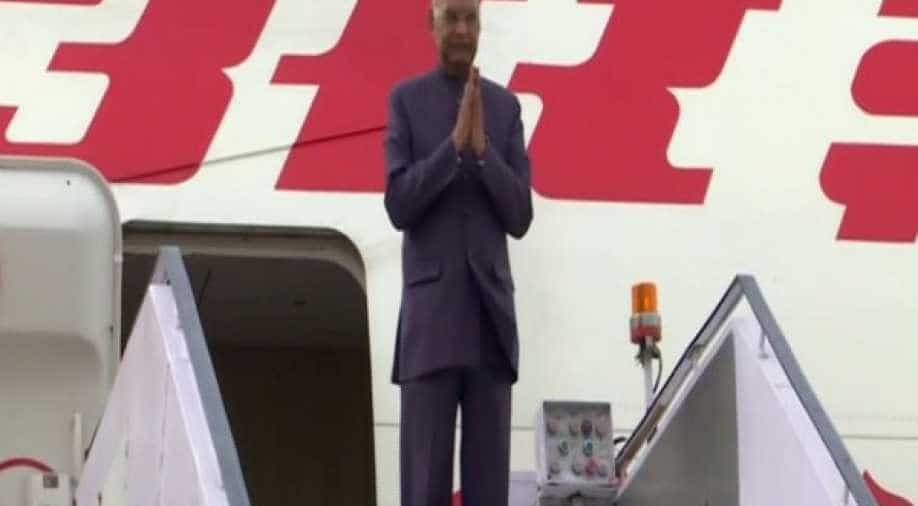 The second leg of the visit to Switzerland will begin on September 11.

President Ram Nath Kovind on Sunday embarked on an official nine-day visit to Iceland, Switzerland, and Slovenia to enhance India's political and economic ties with the three European countries.

The President, accompanied by his wife Savita Kovind left for Iceland on Sunday evening. Kovind will arrive in Iceland and will hold talks with his Icelandic counterpart Gudni Th Johannesson and Prime Minister Katrin Jakobsdottir.

He will also deliver a lecture at the University of Iceland in Reykjavik on 'India-Iceland partnership towards making a greener planet'.

The second leg of the visit to Switzerland will begin on September 11.

The President will have wide-ranging discussions with his Swiss counterpart and country's cabinet.

An Indian business delegation accompanying Kovind will engage with their Swiss contemporaries at the India-Swiss Business Forum.

"India and Switzerland have very extensive economic and trade relationships. The forum aims to take these relations to higher levels."

The President has been invited to address the University of Bern on the theme 'India-Switzerland new age partnership connecting Himalayas with Alps'.

The final leg of the visit to Slovenia will begin on September 15 and mark the first-ever visit by an Indian President to the country.

During the visit, Kovind will hold wide-ranging discussion with his Slovenian counterpart Borut Pahor and the National Assembly President.