Political crisis in Haiti deepens over rival claims to power 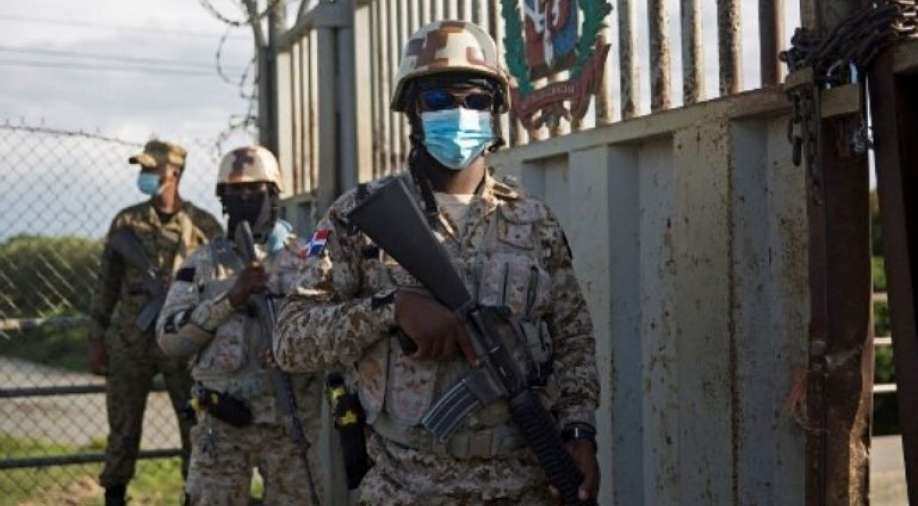 Soldiers guard the Dajabon border crossing between the Dominican Republic and Haiti after the borders were closed due to the assassination perpetrated by an armed group against the president of Haiti, Jovenel Moise, in the early hours of Wednesday, July 7, 2021. Photograph:( AFP )

Angry civilians joined in the search for the assassins, capturing some suspects themselves, setting fire to vehicles thought to have been used in the attack and calling for vigilante justice.

The political storm in Haiti intensified Thursday as two competing prime ministers claimed the right to run the country, setting up an extraordinary power struggle over who had the legal authority to govern after the brazen assassination of President Jovenel Moïse in his home the day before.

Haiti’s interim prime minister, Claude Joseph, says he has taken command of the police and the army, declaring a “state of siege” that essentially put the country under martial law. But constitutional experts questioned his right to impose it, and his claim to power was quickly challenged by a rival.

Two days before his death, Moïse had appointed a new prime minister, Ariel Henry, a neurosurgeon who was supposed to take up the role this week and told a local newspaper that he was the rightful prime minister instead.

The dueling claims created a volatile political crisis that left constitutional experts confused and diplomats worried about a broad societal collapse that could ignite violence or prompt Haitians to flee the country en masse, as they have after natural disasters, coups or other periods of deep instability.

“No one understands” what is happening right now, said Lilas Desquiron, a Haitian writer who was culture minister from 2001-04, leaving the nation’s 11 million people in a “wait-and-see and powerless position.”

Alarmed that Haiti may be approaching a breaking point reminiscent of the surge of Haitian refugees fleeing on boats to Florida after a 1991 coup, US officials quickly sided with the interim prime minister, Joseph, even though he was supposed to be replaced this week.

Briefing reporters Thursday, a State Department spokesperson, Ned Price, said that Joseph was “the incumbent” at the time of the assassination and that the United States would continue to work with him “as such.” But he added that the United States had also “been in contact with” Henry, urging all Haitian officials to work together “to refrain from violence.”

The political struggle unfolded as Haitian security forces hunted for more of the attackers who killed the president. On Thursday, Haitian authorities said they had arrested 17 suspects, including two U.S. citizens, and that three foreign nationals had been killed, adding to Haitian assertions that “foreigners” had been involved.

Little was known about them, but officials identified the Americans as James Solages, 35, and Joseph Vincent, 55, Florida residents of Haitian descent. The other 15 suspects were described as Colombians.

Angry civilians joined in the search for the assassins, capturing some suspects themselves, setting fire to vehicles thought to have been used in the attack and calling for vigilante justice. “Burn them,” one person cried in front of a police station.

Haiti had already been reeling over the question of who should be running the country. For months, angry protesters had accused the president, Moïse, of overstaying his term in a drift toward autocracy.

Now, with his assassination, the leadership question grew even murkier, especially since the nation’s democratic institutions have been severely hollowed out, leaving few legitimate arbiters in the country to oversee a legal transfer of power.

While many countries, including the United States, have been buffeted by rival claims to the presidency, they typically have judges, lawmakers and democratic structures to help settle the disputes.

But today, Haiti is a parliamentary democracy with almost no Parliament. There are currently only 10 sitting senators out of 30 because the terms of the other 20 have expired. The lower house is entirely vacant — their terms expired last year — leaving Moïse to govern by decree for about a year.

Beyond that, the judiciary has been virtually nonexistent for the past year, with repeated strikes from judges protesting the political upheaval and rampant violence often preventing them from working. And the head of the nation’s highest court died of COVID-19 in June, depriving the country of yet another means of determining who should govern.

“What’s happened in Haiti is completely unprecedented,” said Rep. Andy Levin, D-Mich., co-chair of the House Haiti Caucus and member of the House Foreign Affairs Committee. “You’ve got a situation where there’s no government administration that’s seen as legitimate.”

Under Haitian laws, prime ministers are appointed by the president and must be approved by the Parliament, said Jacky Lumarque, rector of Quisqueya University, a large private university in Port-au-Prince. But because Parliament has not been functioning, the political legitimacy of the prime ministers is nonexistent, he argued.

“The difficulty is that none of them are legitimate,” Lumarque said.

Making matters worse, Haiti appears to have two constitutions, and the dueling documents say different things about what to do if a president dies in office.

The 1987 version deems that if the presidency is vacant for any reason, the country’s most senior judge should step in.

But in 2012, the constitution was amended, and the new one directed that the president be replaced by a council of ministers, under the guidance of the prime minister — except if, as was Moïse’s situation, the president was in the fourth year of office. In that case, Parliament would vote for a provisional president — if, of course, there were a Parliament.

The main concern right now, U.S. officials argued, is establishing some kind of order and preventing clashes by armed factions over rival claims of authority. Elections to pick a new president are secondary, they said. There is widespread fear that the situation could quickly spiral out of control, especially given the gang violence, kidnappings, protests and social upheaval that have seized the country for months.

Secretary of State Antony Blinken spoke Wednesday with the interim prime minister, Joseph, offering to assist the country “in support of the Haitian people and democratic governance, peace and security,” the State Department said.

Joseph portrayed the conversation as having lasted more than 30 minutes and used the opportunity to signal to his country that he had the support of its most important international backers — principally, the United States.

In a public address Wednesday, Joseph staked his legitimacy partly on what he called the “receptive” reaction he got from the Core Group, an unofficial coalition of ambassadors and officials from the United States, the United Nations, Canada, France, Germany, Spain, the European Union and the Organization of American States.

The group has long played a major role in shaping Haitian politics, both maneuvering privately and issuing public statements to back selected leaders and encouraging or critiquing specific policies. The group provided important support for Moïse’s seating as president in 2017, though it later turned critical of his government’s failure to adhere to democratic principles.

The president of what remains of the Haitian Senate, Joseph Lambert, also put out a news release Thursday morning, saying that the Senate “reassures Haitians and the international community that everything will be managed by the national institutions, political forces and civil society to guarantee the continuity of the state and the republican order.”

Under the Trump administration, the United States paid relatively little attention to Haiti’s worsening political problems, and it was not a particularly prominent issue for President Joe Biden — until now.

Biden is the latest in a series of modern American presidents to confront turmoil and tragedy in the country.

President George H.W. Bush grappled with the surge of Haitian refugees after the 1991 coup that overthrew the president at the time, Jean-Bertrand Aristide. In 1992, Bush first ordered their detention at the Guantanamo Bay Naval Base and in 1992 ordered the Coast Guard to directly return home any migrant Haitians intercepted at sea.

The refugees then became a campaign issue, with Bill Clinton denouncing Bush for “a cruel policy of returning Haitian refugees to a brutal dictatorship without an asylum hearing.” But in response to reports that 150,000 Haitians were poised to land on US soil immediately after his 1993 inauguration, Clinton said he would continue Bush’s policy.

Political turmoil elsewhere in the Americas has also set off waves of mass migration in recent years, perhaps most notably in Venezuela, where a different standoff over who had the authority to lead the country played out with devastating consequences for the country — and for the region at large.

Accusing the ruling party of stealing the election, Venezuela’s congressional speaker, Juan Guaidó, proclaimed himself the nation’s rightful leader, setting off a diplomatic limbo that ultimately worsened what already was a severe economic crisis.

Dozens of nations, including the United States, recognized Guaidó as Venezuela’s president. But countries like Russia, China and Iran continued backing the nation’s authoritarian leader, Nicolás Maduro, who refused to relinquish power. The dueling factions inside Venezuela created competing parliaments, supreme courts and central banks — even parallel boards of the state energy company.

Even with crippling US sanctions that robbed the Venezuelan government of its most important source of revenue, oil, the Trump administration could not force Maduro from power. But as his country collapsed, millions more Venezuelans fled, spreading out across the region in search of work, food and escape from the chaos.

Ryan Berg, a senior fellow at the Center for Strategic and International Studies in Washington, said that while Haiti’s travails were “pretty unique,” they also represented a new example of challenges to Western democracies more broadly.

“There’s a democratic recession going on,” he said. The Western Hemisphere, he said, “seems to be a region of the world that’s really ailing.”