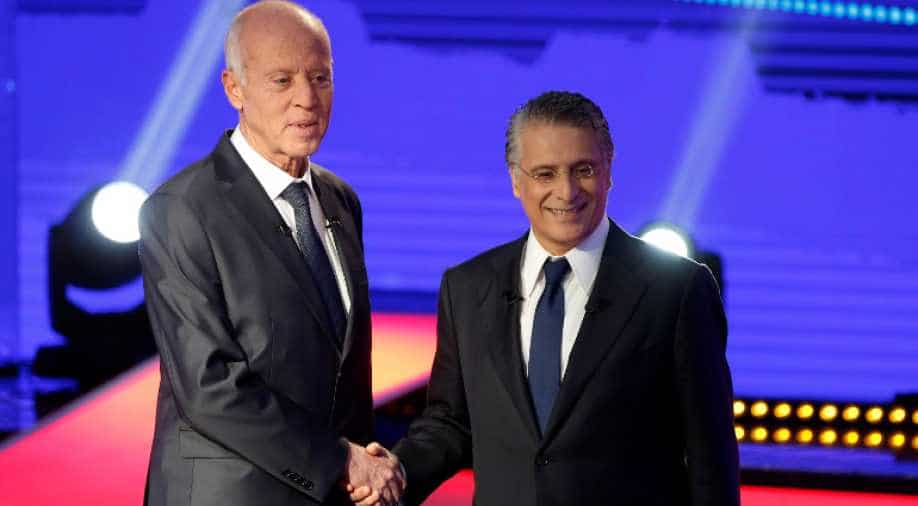 In a contest that reflected Tunisia's shifting post-revolution political landscape, Saied, an independent, scooped 72.5 per cent of the vote according to the Emrhod exit poll on Sunday, and 76.9 per cent in the Sigma one -- over 40 points ahead of Karoui

In a contest that reflected Tunisia's shifting post-revolution political landscape, Saied, an independent, scooped 72.5 per cent of the vote according to the Emrhod exit poll on Sunday, and 76.9 per cent in the Sigma one -- over 40 points ahead of Karoui.

Thousands of people took to the streets of the capital Tunis to celebrate Saied's victory, honking horns and singing the national anthem.

"It's a historic day: Tunisia is reaping the fruits of the revolution," said Boussairi Abidi, a 39-year-old mechanic. "Kais Saied is going to put an end to corruption, he will be a fair president."

The official results are expected Monday.

In his first reaction, Saied thanked the country's young people "for turning a new page", and vowed to try to build "a new Tunisia".

Around 90 per cent of 18- to 25-year-olds voted for Saied, according to estimates by the Sigma polling institute, compared with 49.2 per cent of voters over 60.

"We are very happy. Tunisia has an honest man at the helm now. The difference between the two candidates was the work he has been doing," said Mustafa El Ghali, a family member.

The runoff was contested by two political newcomers -- pitting Saied, nicknamed "Robocop", against businessman, Karoui, who is dubbed Tunisia's "Berlusconi".

They trounced the old guard in a September 15 first round, highlighting voter anger over a stagnant economy, joblessness and poor public services in the cradle of the Arab Spring.

Adding controversy and suspense to the contest, Karoui only walked free from jail on Wednesday, having spent more than a month behind bars on suspicion of money-laundering.

The poll, Tunisia's second free presidential election since its 2011 revolt, followed the death of president Beji Caid Essebsi in July. Turnout was higher than in the first round, and estimated at around 57 per cent.

In one polling station, voters said they were divided between "the one who will apply the law" and the one "who helps the poor", referring to a charity television show that boosted Karoui's popularity.

The 56-year-old tycoon Karoui portrayed himself as a bulwark against political Islam, which he accused his rival of supporting.

He called the result a "denial of justice", saying he had been penalised by his incarceration.

"It's like competing in the Olympics and one breaks one's knee before doing the 100 meters," he said.

Saied, a 61-year-old constitutional law expert, campaigned on the values of the 2011 revolution, based on opposition to Westernised and corrupt elites, and in favour of radical decentralisation.

"You have created a new concept of revolution, let your conscience guide you," he said, casting his ballot.

"Congratulations to Tunisia; less for whom they voted, and more for showing a continued commitment to resolving differences via peaceful transitions," said H.A. Hellyer, a senior fellow at the Royal United Services Institute in London, in a tweet.

For what was the third election in four weeks, some Tunisians organised car-sharing and free transport for students who had to travel far to their hometowns to cast their ballots.

"I am doing it out of love for my country. I support the one who embodies hope for Tunisia," said taxi driver Bakri who offered free rides to Saied supporters between Tunis and the coastal city of Nabeul.

The Islamist-inspired Ennahdha party, which won the most seats in parliament in general elections earlier this month, had called on supporters to back Saied.

But the runoff outcome had remained uncertain, with a ban on opinion polls.

Saied topped the first round with 18.4 per cent of votes, while Karoui followed with 15.6 per cent.

While the candidates were both seen as anti-establishment figures, the contrast between them was sharp, with Saied earning his nickname for his rigid and austere manner.

A social conservative, he has defended the death penalty, criminalisation of homosexuality and a sexual assault law that punishes unmarried couples who engage in public displays of affection.

Karoui presented himself as a candidate for the poor whose appeal stemmed largely from his media empire and philanthropic activity.

Karoui, who always appeared in designer suits, has dismissed the allegations against him as politically motivated.