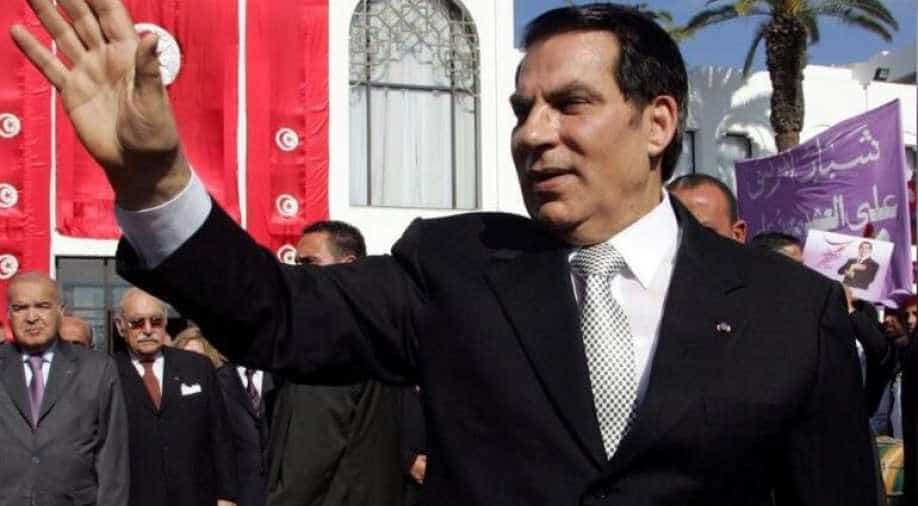 Ben Ali, who ruled his North African country from 1987 until 2011, was viewed by some as a bulwark against Islamist extremism but faced criticism for muzzling the opposition and his reluctance to embrace democracy.

"We had confirmation of his death 30 minutes ago," the ministry said on Thursday afternoon without giving further details.

Ben Ali, who ruled his North African country from 1987 until 2011, was viewed by some as a bulwark against Islamist extremism but faced criticism for muzzling the opposition and his reluctance to embrace democracy.

In late 2010, a young trader in Sidi Bouzid, in the impoverished centre of the country, set fire to himself in protest at humiliation by police.

That sparked protests which rocked Tunisia and triggered a deadly clampdown.

But the protesters won: on January 14, 2011, Ben Ali fled Tunisia for Saudi Arabia.

His rapid departure sparked a string of similar uprisings across the region, toppling Egyptian and Libyan strongmen Hosni Mubarak and Moamer Kadhafi.

The turmoil also triggered what was to become Syria's devastating eight-year war.

In mid-2012, Ben Ali was sentenced in absentia to life in jail for his role in the deaths of protesters during the uprising.

More than 300 people were killed in the initial repression of the protest movement.

Photos posted on Instagram in 2013 showed the former strongman smiling in striped pyjamas.

Rumours of his death had circulated several times in recent years.

A week ago, Ben Salha said the former president was in a "critical condition", before denying reports that he had died.

"He is not dead, but his state of health is bad. He has left the hospital and is currently being cared for at his home — his condition is stabilising", the lawyer said at the time.

Prime Minister Youssef Chahed said last week that on humanitarian grounds Ben Ali could return to die in his own country -- "like every Tunisian" — should he wish to do so.

It was not possible to ascertain immediately whether the former president's funeral would take place in Saudi Arabia or in Tunisia.

Tunisians canvassed by AFP on Thursday did not oppose a funeral in Tunisia.

"He deserves to be buried in his own country. It can't do any harm," said Moncef Balghaji in central Tunis.

"He is dead! This person was president and he was a part of Tunisia's history", he added.

Another resident, Mounir — who did not want to give his surname — said "I do not see him as a president but as a Tunisian citizen... He has the right to buried here, regardless of what he did."

Ben Ali is survived by six children; three daughters by a first marriage and two daughters and a son by his wife Leila Trabelsi, who accompanied him into exile.

A career soldier, Ben Ali took power on November 7, 1987, when he toppled Habib Bourguiba, the ailing father of Tunisian independence who was by then reported to be senile.

He went on to make Tunisia a moderate, secular voice in the Arab world while Western governments viewed him as an effective bulwark against extremism — despite criticism of his reluctance to embrace democracy.

Aside from his conviction over the death of protesters, Ben Ali was also sentenced in absentia to misappropriating public funds and ordering the torture of army officers who allegedly led a coup attempt against him.

Tunisia on Sunday held a presidential election, in which two outsiders — law professor Kais Saied and detained media mogul Nabil Karoui — made it through to a second-round run-off.