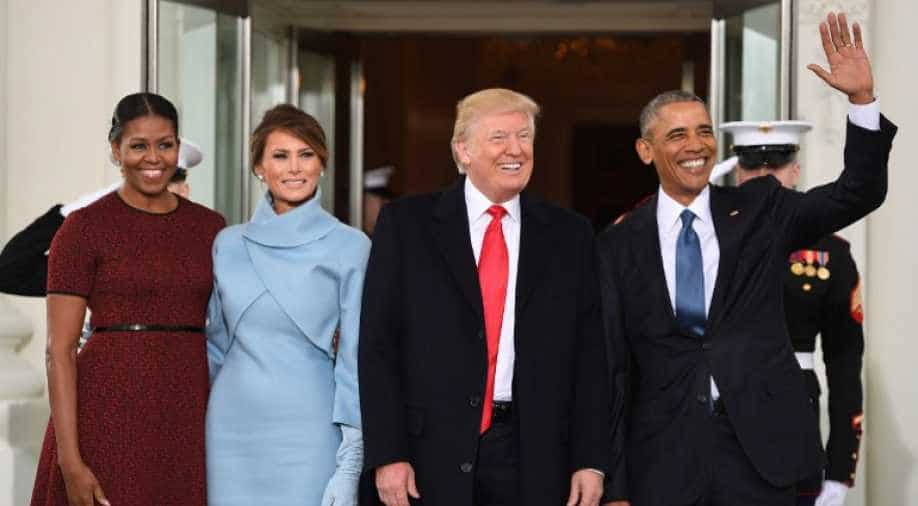 Barack and Michelle Obama welcome Donald Trump and his wife Melania to the White House in Washington on January 20. Photograph:( AFP )

Barack Obama and Donald Trump arrived at the US Capitol on Friday where the president-elect will be sworn in as the United States' 45th head of state.

Obama and his wife Michelle left the White House for the last time after hosting Trump and the incoming first lady Melania for a traditional tea and coffee.

The two couples travelled in a joint motorcade for the 2.5 miles (four kilometers) down Pennsylvania Avenue to the inauguration ceremony at the Capitol.

"The movement continues, the work begins," tweeted the Republican billionaire tweeted before tracing his predecessors' steps to St. John's Church and the White House.

It all begins today! I will see you at 11:00 A.M. for the swearing-in. THE MOVEMENT CONTINUES - THE WORK BEGINS!

There he was greeted warmly by Obama, capping a transfer of power that has been peaceful yet rancorous.

"Mr President-elect, how are you?" Obama asked, after having deposited a letter in the Resolute desk and departed the Oval Office for the last time.

Hundreds of thousands of people will gather on the National Mall in the center of the nation's capital to celebrate a man whose short 19-month political career has defied all predictions, and many norms.

In the cool Washington dawn, his most ardent supporters ignored intermittent light rain and began to make their way by metro, car and on foot to take part in history.

"I've been waiting for this for a long time," said Thomas Mendenhall, 68, a retired banker from Missouri. "We just want change."

When Trump descended the escalators of his glitzy New York tower in June 2015, his run for office and his supporters were dismissed and even mocked.

But shortly before midday Friday, Trump will place his hand on Abraham Lincoln's bible, recite the oath of office on the steps of the Capitol and become the most powerful man on earth.

His staff, many shunned by friends for supporting a man who has been labeled a racist and bigot by his critics, will become power players in the White House.

In the primaries, Trump dominated a crowded Republican presidential field with smash-mouth rhetoric and star power. He rode that same wave of anti-elite sentiment to victory over Democrat Hillary Clinton in the November election.

At 70 years of age, he is the oldest man ever to begin work in the Oval Office.

But the real estate mogul and one-time television reality star is also a political neophyte -- he will be the first president never to have held elected office, served in the government or the armed forces.

For Trump's supporters, that is a central part of his appeal.

"He's somebody that's not a politician" said 59-year-old Sandra Jackson-Carter, a salon owner from Bakersville, California.

"He's going to unite the country and make America great again," she said. "This is history. There's nothing better."

For his critics, Trump's arrival in Washington on Thursday onboard an Air Force jet was more like a hostile takeover than a traditional changing of the guard.

Small demonstrations popped up across the city center on Friday, with shouts of  "not my president" and "No Trump, No KKK, no fascist USA." Some tried to prevent Trump supporters from passing, but police intervened.

A much larger rally is planned for Saturday.

On Thursday evening, hundreds of protesters demonstrated outside a pro-Trump event, heckling and shouting at departing guests and lighting protest signs on fire before police used chemical spray on the crowd.

Trump enters office with a 37 percent approval rating, the lowest on record, according to a CBS News poll.

Most of Obama's White House staff have cleaned out their desks and the normally busy corridors of the West Wing were unusually quiet Friday. Staffers expressed relief at the prospect of rest, but foreboding about the road ahead.

That sentiment is echoed across many of the world's capitals. Trump has vowed to tear up Obama's policies and re-examine decades-old alliances with Europe and in Asia.

One of Obama's last acts in office was to speak to German Chancellor Angela Merkel, and declare trans-Atlantic ties vital for the world order -- a statement that would have been a banal platitude before this rocky transition.

After the Obamas and Trumps had morning tea at the White House, they will travel the 2.5 miles (four kilometers) down Pennsylvania Avenue to the swearing-in ceremony at the Capitol.

Inaugural addresses -- from Lincoln to John F. Kennedy -- echo across American history. Phrases like "malice towards none" and "ask not what your country can do for you" have been carved into the vernacular.

The most noted inaugural addresses had sought to lift Americans' gaze up from the rancor and troubles of the day toward the horizon and a better tomorrow.

Trump aides are promising an address that is at once short -- at around 20 minutes -- and philosophical.

"It's going to be a very personal and sincere statement about his vision for the country," said incoming White House press secretary Sean Spicer.

"He will discuss what it means to be an American, the challenges that we face, as members of the middle class, that they face," he said.

"I think it's going to be less of an agenda and more of a philosophical document, a vision of where he sees the country, the proper role of government, the role of citizens."

After his speech, Trump will attend a luncheon inside the Capitol, before heading back to the White House to begin the business of governing.