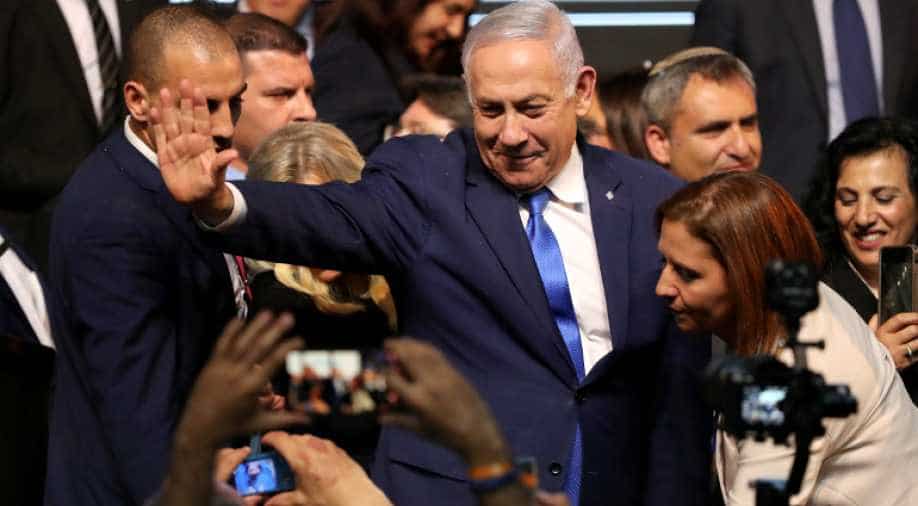 Palestinians immediately reacted by saying Netanyahu was destroying any hopes for peace, while his electoral opponents accused him of a cynical play for right-wing nationalist votes with polls only a week away.

Palestinians immediately reacted by saying Netanyahu was destroying any hopes for peace, while his electoral opponents accused him of a cynical play for right-wing nationalist votes with polls only a week away.

In his televised speech, the prime minister also reiterated his intention to annex Israeli settlements in the wider West Bank if re-elected.

But he said he would do that in coordination with US President Donald Trump, whose long-awaited peace plan is expected to be unveiled sometime after the vote.

Those moves could effectively kill any remaining hopes for a two-state solution to the Israeli-Palestinian conflict, long the focus of international diplomacy.

"There is one place where we can apply Israeli sovereignty immediately after the elections," Netanyahu said during the address that included a map of the Jordan Valley on an easel next to him.

"If I receive from you, citizens of Israel, a clear mandate to do so ... today I announce my intention to apply with the formation of the next government Israeli sovereignty over the Jordan Valley and northern Dead Sea."

Senior Palestinian official Hanan Ashrawi said Netanyahu was "not only destroying the two-state solution, he is destroying all chances of peace".

She called it "worse than apartheid".

Saeb Erekat, the chief Palestinian negotiator, said the annexation would be "manifestly illegal" and called on the international community to act.

Jordan's Foreign Minister Ayman Safadi warned the move would "push the whole region towards violence" and risks "killing off the entire peace process".

"The election promise of Netanyahu, who is giving all kind of illegal, unlawful and aggressive messages before the election, is a racist apartheid state," Cavusoglu wrote on his official Twitter account in both English and Turkish.

Saudi Arabia condemned it as a "dangerous escalation against the Palestinian people" and called for an emergency meeting of foreign ministers from the 57 member states of the Organisation of Islamic Cooperation (OIC), the official Saudi Press Agency said, citing the royal court.

The Jordan Valley accounts for around one-third of the West Bank and Israeli right-wing politicians have long viewed the strategic area as a part of the territory they would never retreat from, seeing it as the country's eastern border.

Israeli settlements are located in what is known as Area C of the West Bank, which accounts for some 60 per cent of the territory, including the vast majority of the Jordan Valley.

Netanyahu said his annexation plans would not include Palestinian cities, such as the Jordan Valley's Jericho, though it would be encircled by Israeli territory.

The premier said Trump's peace parameters "will place before us a great challenge and also a great opportunity."

"This is a historic, one-time opportunity to apply Israeli sovereignty on our settlements... and other places of importance to our security, our heritage and our future."

Trump has thrown US support overwhelmingly in favour of Israel since taking office, including by recognising Jerusalem as Israel's capital and cutting hundreds of millions of dollars in aid to the Palestinians.

Ahead of April elections, Trump recognised Israeli sovereignty over the occupied Golan Heights, seized from Syria in the 1967 Six-Day War.