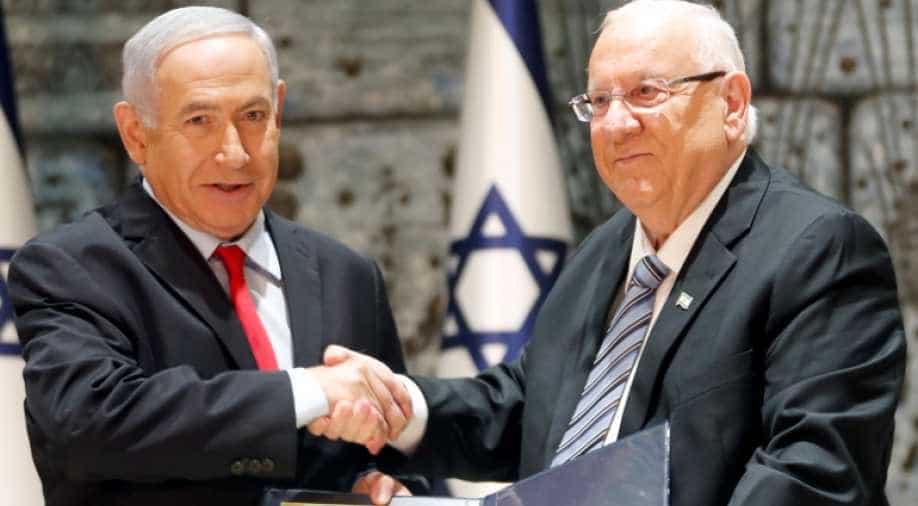 In office for the past decade, Netanyahu won a fifth term despite an announcement by Attorney General Avichai Mandelblit in February that he intends to charge the prime minister in three corruption cases. Netanyahu has denied any wrongdoing.

Israel's president on Wednesday nominated Prime Minister Benjamin Netanyahu to head the next government, after he won the backing of a majority of members of parliament following an April 9 election.

In office for the past decade, Netanyahu won a fifth term despite an announcement by Attorney General Avichai Mandelblit in February that he intends to charge the prime minister in three corruption cases. Netanyahu has denied any wrongdoing.

"At a time of great turmoil in our region, we have managed not only to maintain the state's security and stability, we have even managed to turn Israel into a rising world power," Netanyahu said at the nomination ceremony after President Reuven Rivlin gave him the mandate to form a new government.

Netanyahu has 28 days, with a two-week extension if needed, to complete the task. If, as seems likely, he succeeds, he will become in July Israel's longest-serving prime minister.

Netanyahu has said he intends to build a coalition with five far-right, right-wing and ultra-Orthodox Jewish parties that would give the government, led by his Likud party, 65 seats. No party has ever won an outright majority in the 120-seat Knesset.

Among the most pressing issues awaiting the new government will be US President Donald Trump's Middle East peace plan to end the Palestinian-Israeli conflict.

Trump's senior adviser Jared Kushner said on Wednesday it would be unveiled once the new Israeli government is in place and after the Muslim holiday of Ramadan, which ends in early June. The plan, Kushner said, would require compromise by all parties.

A right-wing coalition in Israel would, however, likely object to any proposed territorial concessions to the Palestinians, who are boycotting the Trump administration over what they see as its pro-Israel bias.

Such a coalition would also be less likely to pressure Netanyahu to step down if he is indicted for corruption.

Netanyahu is under no legal obligation to resign if charges are brought against him and has said he plans to serve Israel for many more years. He can still argue, at a pre-trial hearing whose date has not been set, against the formal filing of bribery and fraud charges against him.

The election, brought forward from November, was widely seen in Israel as a bid by Netanyahu to win a renewed mandate in the hopes that it would strengthen his hand in the legal proceedings against him.

"I am not afraid of threats and I am not deterred by the media. The public has given me its full confidence, clearly and unequivocally, and I will continue to do everything in order to serve you, the citizens of Israel," he said on Facebook on Tuesday.