Military option for North Korea not preferred, but would be 'devastating': President Trump 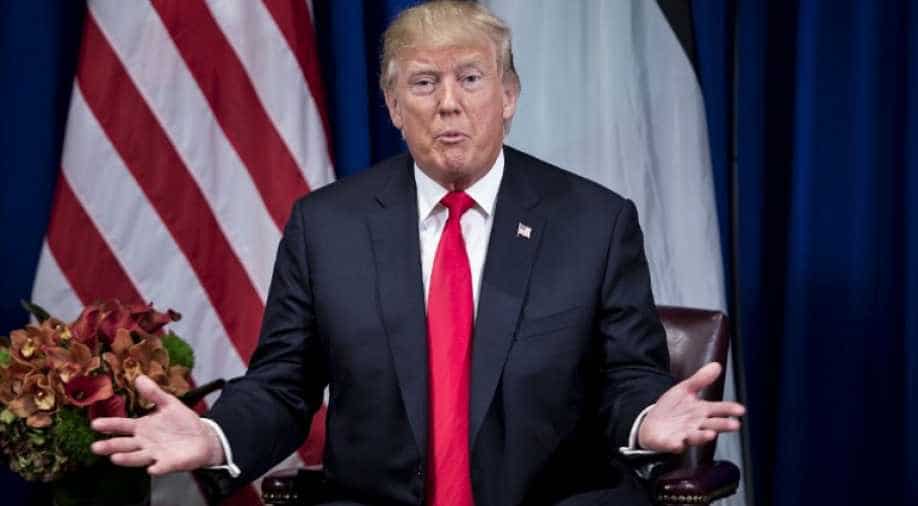 President Donald Trump in his speech at the UN General Assembly had said the 'United States will have no choice but to totally destroy North Korea'. Photograph:( AFP )

President Trump said the use of force was not Washington's first option to deal with the country's ballistic and nuclear weapons programme||The US has not detected any change in North Korea's military posture reflecting an increased threat, a top US military official said

President Donald Trump warned North Korea on Tuesday that any US military option would be "devastating" for Pyongyang, but said the use of force was not Washington's first option to deal with the country's ballistic and nuclear weapons programme.

"We are totally prepared for the second option, not a preferred option," Trump said at a White House news conference, referring to military force. "But if we take that option, it will be devastating, I can tell you that, devastating for North Korea. That's called the military option. If we have to take it, we will."

Bellicose statements by Trump and North Korean leader Kim Jong Un in recent weeks have created fears that a miscalculation could lead to action with untold ramifications, particularly since Pyongyang conducted its sixth and most powerful nuclear test on September 3.

Despite the increased tension, the United States has not detected any change in North Korea's military posture reflecting an increased threat, the top US military officer said on Tuesday.

The assessment by Marine Corps General Joseph Dunford, chairman of the US Joint Chiefs of Staff, about Pyongyang's military stance was in contrast to a South Korean lawmaker who said Pyongyang had boosted defences on its east coast.

"While the political space is clearly very charged right now, we haven't seen a change in the posture of North Korean forces, and we watch that very closely," Dunford told a Senate Armed Services Committee hearing on his reappointment to his post.

A US official speaking on the condition of anonymity said satellite imagery had detected a small number of North Korean military aircraft moving to the North's east coast. However, the official said the activity did not change their assessment of Pyongyang's military posture.

North Korean Foreign Minister Ri Yong Ho on Monday accused Trump of declaring war on the North and threatened that Pyongyang would shoot down US warplanes flying near the Korean Peninsula after American bombers flew close to it last Saturday. Ri was reacting to Trump`s Twitter comments that Kim and Ri "won`t be around much longer" if they acted on their threats towards the United States.

North Korea has been working to develop nuclear-tipped missiles capable of hitting the US mainland, which Trump has said he will never allow. Dunford said Pyongyang will have a nuclear-capable intercontinental ballistic missile "soon," and it was only a matter of a "very short time".

"We clearly have postured our forces to respond in the event of a provocation or a conflict," the general said, adding that the United States has taken "all proper measures to protect our allies" including South Korean and Japan.

"It would be an incredibly provocative thing for them to conduct a nuclear test in the Pacific as they have suggested, and I think the North Korean people would have to realise how serious that would be, not only for the United States but for the international community," Dunford said.

South Korean lawmaker Lee Cheol-uoo, briefed by the country's spy agency, said North Korea was bolstering its defences by moving aircraft to its east coast and taking other measures after the flight by US bombers. Lee said the United States appeared to have disclosed the flight route intentionally because North Korea seemed to be unaware.

US Air Force B-1B Lancer bombers, escorted by fighter jets, flew east of North Korea in a show of force after the heated exchange of rhetoric between Trump and Kim.

The United States has imposed sanctions on 26 people as part of its non-proliferation designations for North Korea and nine banks, including some with ties to China, the US Treasury Department's Office Of Foreign Assets Control Sanctions said on Tuesday.

The US sanctions target people in North Korea and some North Korean nationals in China, Russia, Libya and Dubai, according to a list posted on the agency's website.

US Secretary of State Rex Tillerson will visit China from Thursday to Saturday for talks with senior officials that will include the crisis over North Korea and trade, the State Department said on Tuesday.

Evans Revere, a former senior diplomat who met with a North Korean delegation in Switzerland this month, said that Pyongyang had been reaching out to "organizations and individuals" to encourage talks with former U.S. officials to get a sense of the Trump administration`s thinking.

"They`ve also been accepting invitations to attend dialogues hosted by others, including the Swiss and the Russians," he said.

Revere said his best guess for why the North Koreans were doing this was because they were "puzzled by the unconventional way that President Trump has been handling the North Korea issue" and were eager to use "informal and unofficial meetings to gain a better understanding of what is motivating Trump and his administration".

Speaking in Beijing, Chinese Foreign Ministry spokesman Lu Kang said war on the Korean Peninsula would have no winner.

"We hope the US and North Korean politicians have sufficient political judgement to realise that resorting to military force will never be a viable way to resolve the peninsula issue and their own concerns," Lu said.

In Moscow, Russia`s Foreign Ministry said it was working behind the scenes to find a political solution and that it plans to hold talks with a representative of North Korea`s foreign ministry who is due to arrive in Moscow on Tuesday, the RIA news agency cited the North`s embassy to Russia as saying.

The United States and South Korea are technically still at war with North Korea after the 1950-53 conflict ended in a truce and not a peace treaty.