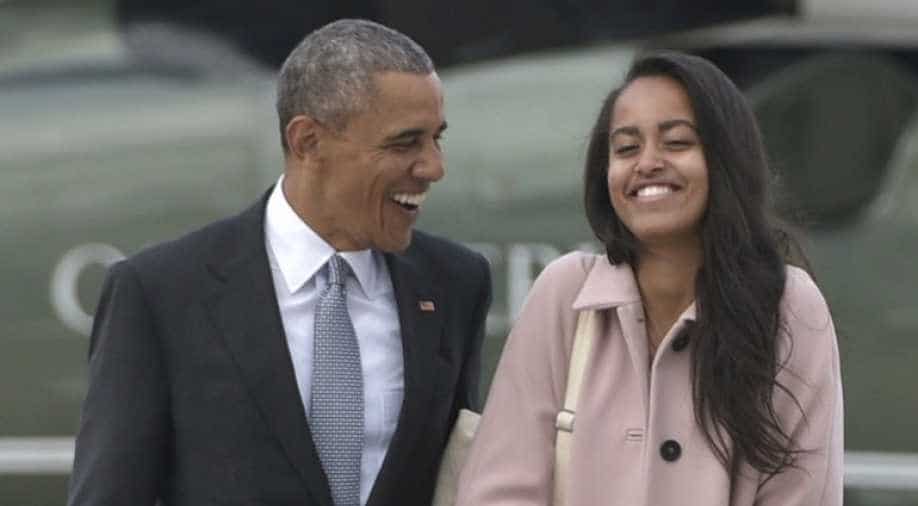 'Divergent'?actress Shailene Woodley said?'It was amazing to see Malia (R). I saw her last night when we did the event with [Standing Rock] chairman Dave Archambault. And it was incredible to see her there.' Photograph:( AFP )

Police have used aggressive tactics against protesters including water cannons in sub-zero temperatures, rubber bullets and attack dogs. But Malia has a White House security detail.

Malia flew down from the family holiday at Palm Springs to attend screenings at the festival. It was not clear if she was there as part of her internship with Hollywood producer Harvey Weinstein.

"Divergent" actress Shailene Woodley told Democracy Now, “It was amazing to see Malia. I saw her last night when we did the event with [Standing Rock] chairman Dave Archambault. And it was incredible to see her there.”

“To witness a human being and a woman coming into her own outside of her family and outside of the attachments that this country has on her, but someone who’s willing to participate in democracy because she chooses to, because she recognises, regardless of her last name, that if she doesn’t participate in democracy, there will be no world for her future children," she added.

After large-scale protests, Obama had decreed that the construction of the pipeline will be stopped. However, Trump reversed the order after taking office. According to his federal disclosures form, Trump holds stock in the company building the Dakota Access oil pipeline, CBS reports. While the amount of stock in Texas-based Energy Transfer Partners is modest compared to the rest of his portfolio, estimated at between $15,000 and $50,000, he also owns between $100,000 and $250,000 in Phillips 66, which has a one-quarter share of Dakota Access, CBS reports.

Protesters are planning to challenge the executive order and "mobilise" after the setback.

“What we could do now as a population, as a society, is to hold our corporations accountable and hold our banks accountable, because there are a lot of banks that are invested in this pipeline,” Woodley told MSNBC. “Regardless of any executive order or what our politicians want to do, if there’s no money invested in the pipelines, then they can’t be built.”

Woodley has been a staunch critic of the Dakota Access Pipeline, which would transport crude oil through the sacred lands of the Standing Rock Sioux Reservation, polluting the tribe's water source.  Woodley was arrested with 26 others for criminal trespassing in October while protesting.