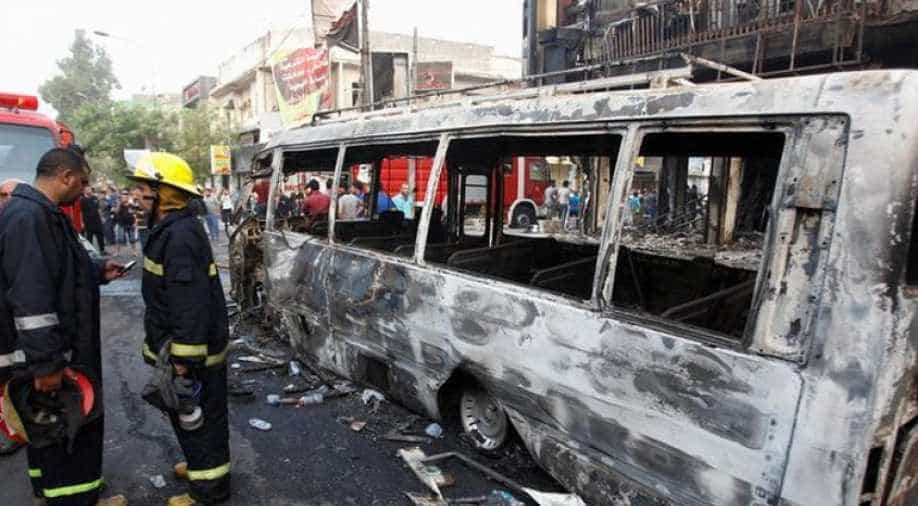 The minister said that IS bombings in Baghdad would not end unless "disorder" plaguing Iraq's security apparatus was rectified. Photograph:( Reuters )

Follow Us
Iraq's interior minister resigned on Tuesday and said a deputy would take over his responsibilities, a few days after the deadliest of many car bombings in Baghdad since the 2003 US-led invasion.

Mohammed Ghabban made the announcement at a news conference in Baghdad, a video of which was posted on his Facebook page. His resignation will be official only if Prime Minister Haider Al Abadi approves it. Abadi's office had no immediate comment.

The death toll from a massive suicide bombing in Baghdad's central shopping district of Karrada on Saturday has reached 250, Iraq's health ministry said on Tuesday.

It was the worst single car bomb attack in Iraq since US forces toppled Saddam Hussein 13 years ago and deepened the anger of many Iraqis over the weak performance of the security apparatus.

Islamic State militants, who government forces are trying to eject from large swathes of northern and western territory seized in 2014, claimed responsibility for the bombing.

The attack showed Islamic State (IS) remains capable of ad-hoc attacks causing major loss of life despite losing considerable ground on the battlefield, most recently the city of Falluja, an hour's drive west of the capital.

The interior minister said that the explosive-packed vehicle came from the eastern province of Diyala, and blamed a lack of communication between multiple forces in charge of the capital's security.

Ghabban said in an interview last month that a recent spate of IS bombings in Baghdad would not end unless "disorder" plaguing Iraq's security apparatus was rectified.

He said then that security forces outside his control - including units reporting to two counter-terrorism agencies, two defence ministry directorates and regional security commands - overlap with his ministry's own counter-intelligence efforts.