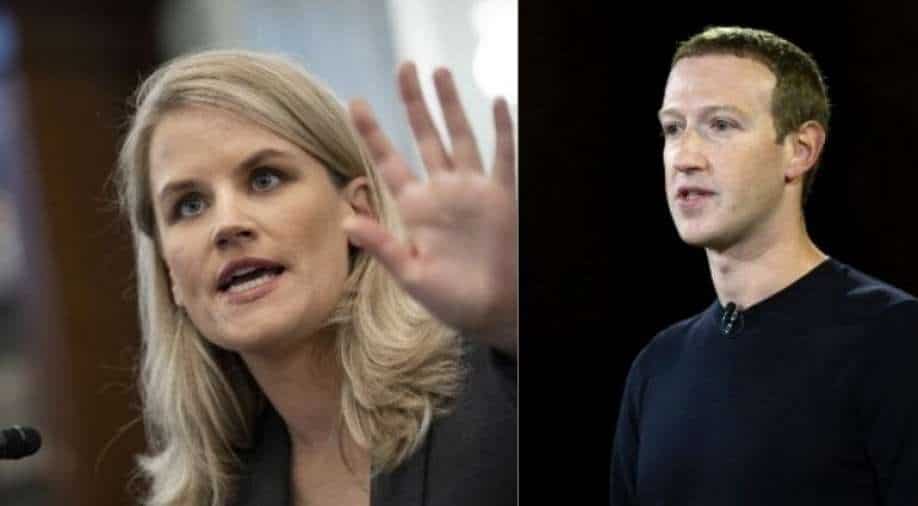 Haugen chose a middle path, one that appears to have captured the best of both arrangements, from her perspective, while also foiling Facebook’s attempts to contain the story.

Frances Haugen first met Jeff Horwitz, a tech-industry reporter for The Wall Street Journal, in early December on a hiking trail near the Chabot Space & Science Center in Oakland, California.

She liked that he seemed thoughtful, and she liked that he had written about Facebook’s role in transmitting violent Hindu nationalism in India, a particular interest of hers. She also got the impression that he would support her as a person, rather than as a mere source who could supply him with the inside information she had picked up during her nearly two years as a product manager at Facebook.

"I auditioned Jeff for a while," Haugen told me in a phone interview from her home in Puerto Rico, "and one of the reasons I went with him is that he was less sensationalistic than other choices I could have made."

She became one of the greatest sources of the century, turning over the tens of thousands of pages of internal documents she had collected. Starting Sept. 13, the Journal justified her confidence with a meticulous rollout that included 11 major articles by Horwitz and other reporters cleverly packaged under a catchy rubric, The Facebook Files.

Key revelations included how Facebook executives handled politicised lies, including Donald Trump’s claims of election fraud. Often, the company chose to let misinformation spread widely, to keep more people logging on. The series also noted the lengths that Facebook went to in its desperation to hang on to its audience as young people drifted away from its platforms.

The Journal also produced a podcast episode introducing Haugen as poised, incisive and intensely moral, a depiction that Horwitz told me he agrees with after much reporting, but which also amounted to white-glove treatment of a treasured source.

So there was an uncomfortable moment Oct. 7, when a communications firm working with Haugen invited Horwitz and two of his editors to a Zoom call with a group that would grow to include journalists from 17 other U.S. media outlets.

On the call, Haugen offered to share redacted versions of the trove of Facebook documents under an embargo to be set by the group. The firm, founded by former Barack Obama aide Bill Burton, would help manage the process. After she made her pitch, Horwitz and his colleagues found themselves in a strange position: The source who had provided them with the stuff of so many exclusive scoops now seemed to be going rogue.

"This is a little awkward," Jason Dean, an editor at the Journal, said on the call, according to three participants.

The Journal team left before the call was over. Since then, journalists at The Atlantic, The Associated Press, CNN, NBC News, Fox Business and other outlets, including The New York Times, have been poring over the first tranche of Haugen’s documents, along with a parallel group in Europe, with a plan to publish their findings Monday (although stories began trickling out Friday night).

We live in a time of megaleaks, enabled by the same digital technology that allows us to surveil one another and document our lives as never before. These leaks have given the leakers and their brokers a new kind of power over the news media, raising tricky questions about how their revelations should enter the public sphere. There are questions, in particular, on the balance of power between the sources of vital information and the reporters who benefit from them.

Some leaks, including U.S. military and State Department files, emerged on WikiLeaks or nameless servers in the form of massive data dumps; others, including Edward Snowden’s National Security Agency files and The Intercept’s revelations of America’s drone wars, came about after journalists had gained sources’ trusts.

Reports on the Panama Papers, based on the leaking of more than 11 million documents, and other examinations of global tax evasion that followed it were brokered through the International Consortium of Investigative Journalists, which managed a collaboration among hundreds of journalists around the world. They read the documents, as well as one another’s stories, on a secure server before coordinating the rollout of their articles on social media.

In some cases, the leaker or hacker seems to be the one who controls how and when information is released. That’s how it went in the run-up to the 2016 presidential election, when a Kremlin-directed cyberattack on the Democratic National Committee led to the devastatingly timed publication of the committee’s private documents on WikiLeaks.

In other instances, a key source may yield to a unified group of journalists — at the International Consortium of Investigative Journalists or elsewhere — who add layers of reporting and analysis to the raw material.

"You can’t afford to have the source dictate the story," Gerard Ryle, director of the International Consortium of Investigative Journalists, said in an interview.

Haugen chose a middle path, one that appears to have captured the best of both arrangements, from her perspective, while also foiling Facebook’s attempts to contain the story.

First, she handed her documents to the Journal for a boutique rollout. Then she opened the journalistic equivalent of an outlet store, allowing reporters on two continents to root through everything the Journal had left behind in search of overlooked informational gems. Her intention was to broaden the circle, she said. She added that she plans to share the documents with academic writers and publications from parts of the world where she sees the greatest peril, including India and parts of the Middle East.

"The reason I wanted to do this project is because I think the global South is in danger," she said.

With this model, Haugen and her advisers have created a new kind of journalistic network, one that has stirred mixed feelings among the journalists involved. In the past two weeks, they have gathered on the messaging app Slack to coordinate their plans — and the name of their Slack group, chosen by Adrienne LaFrance, executive editor of The Atlantic, suggests their ambivalence: "Apparently We’re a Consortium Now."

Inside the Slack group, whose messages were shared with me by a participant, members have reflected on the strangeness of working, however tangentially, with competitors. (I didn’t speak to any Times participants about the Slack messages.)

"This is the weirdest thing I have ever been part of, reporting-wise," wrote Alex Heath, a tech reporter for The Verge.

In an interview, Brian Carovillano, head of investigations for The Associated Press, said, "It’s remarkable to see these news organizations, large and small, set aside some of their competitive impulses and work together to report out a story that is unquestionably in the public interest."

The Slack group has also discussed news outlets that are not part of the consortium, including The Information. (In an article published Friday about Haugen’s media strategy, The Information reported that it had asked to join the group, "but was told by one participant that it was not accepting new members.") The Guardian, which won a Pulitzer Prize in public service in 2014 for its reports on secret surveillance by the National Security Agency — a series made possible by Snowden’s leaks — was another publication that got left out.

Haugen told the participants that she felt the Journal could have published more articles on the documents she provided, especially on Facebook’s effect on nations where English is not the main language.

The polished rollout, including Haugen’s Oct. 3 appearance on "60 Minutes" and congressional testimony days later, has led to dark hints from Facebook and its allies that there is something a little too good to be true about her. The Journal’s right-wing editorial page accused her of seeking to censor political speech, writing that it was "notable that her appearance seems to have been midwifed by Bill Burton, a prominent Democratic communications executive." A Facebook executive tweeted preemptively to suggest that the embargo could amount to an "orchestrated ‘gotcha’ campaign."

I haven’t found anything to suggest that there is more, or less, than meets the eye to Haugen, a high school debater who had worked at Google and Pinterest before joining Facebook in 2019.

"There is zero evidence whatsoever in my mind of any other entity being involved," Horwitz told me.

Lawrence Lessig, the Roy L. Furman Professor of Law at Harvard Law School, who volunteered as her lawyer, said he had brought in Burton, the former Obama aide, in September, after the Journal’s reporting was underway.

Haugen, in our phone interview, also resolved a minor mystery: whether she’s quietly relying on the financial support of Pierre Omidyar, an eBay co-founder whose groups started working with her in October, as Politico first reported.

The reality, she said, is that she has her own financial resources, and has accepted help from nonprofit groups backed by Omidyar only for travel and similar expenses.

"For the foreseeable future, I’m fine, because I did buy crypto at the right time," she told me.

She noted that she had moved to Puerto Rico to cope with a health condition — but also to join her "crypto friends" on the island, whose capital-gains tax exemptions have made it a hub for that novel financial system.

(Burton said he was initially working without pay but is now being paid by donors, including the nonprofit groups backed by Omidyar.)

When I began reporting this column, I thought the central question would be whether Haugen’s tactics had allowed her to control the story, and whether journalistic collaboration had bled into groupthink. But although a glance at Twitter shows that journalists on any beat can slip into a herd mentality, there’s little evidence that this leak, with its trove of documentary detail, had deepened that tendency.

Competitive pressures have remained close to the surface. The Journal would have preferred other outlets stick with its "Facebook Files" branding, but the Times’ Mike Isaac wrote in the Slack group that using that phrase would be "free advertising for the Journal series," prompting Casey Newton of the newsletter Platformer to suggest going with "The Leftovers." Most outlets settled on "The Facebook Papers."

By Friday night — Black Friday at the information mall, so to speak — the Slack group was falling apart. Another Times reporter, Ryan Mac, had dropped in late that afternoon with a "heads-up": The Times would be publishing an article on Facebook’s conduct in the run-up to the Jan. 6 riot at the U.S. Capitol based — he assured his rivals — on "documents we got before the formation of the consortium."

It seemed to many others to be within the letter of their agreement, but also an attempt by the Times to get ahead of competitors who hadn’t obtained the documents separately.

"My thought is, if you are a reporter who had these docs, maybe it would have been cooler to not be part of the consortium, rather than run down the clock," NBC News' Brandy Zadrozny fumed in the Slack group.

After NBC News responded to the Times’ move by breaking the embargo with its own Facebook article, Zadrozny apologised to her rival reporters in a Slack message: "My editor says if the nytimes doesn’t have to abide by the rules then we are out. I’m really sorry. This sucks. And now it’s a media story."

A Times spokesperson, Danielle Rhoades Ha, said the publication is playing by the"consortium’s ground rules," under which "documents obtained by outlets prior to the consortium’s creation are not subject to the embargo time."

Haugen, for her part, has watched the Journal’s rollout and its rivals’ subsequent scramble to catch up with equanimity. "Now that I’ve met so many journalists, and I’ve seen how hard Jeff works, I feel more grateful for the media than when I started," she said.