Hanoi summit: 'In no rush, we want to do the right deal', says Trump ahead of joint agreement signing 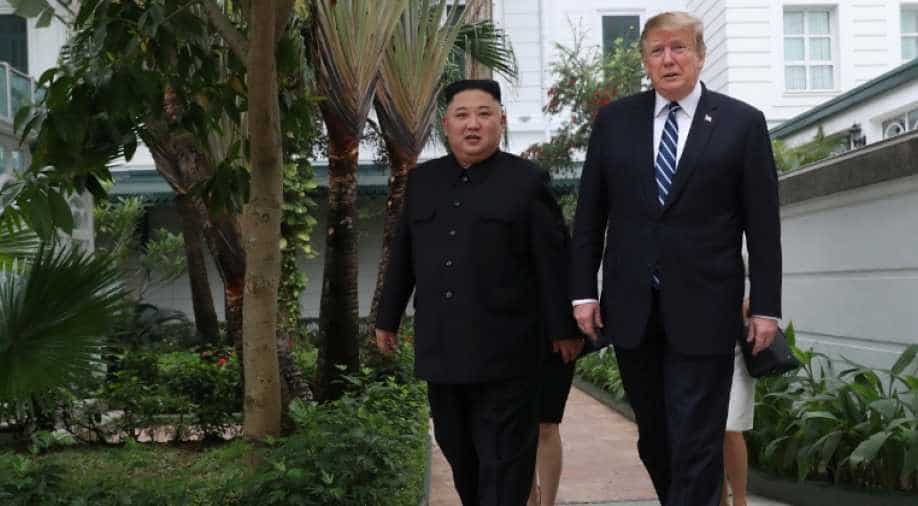 North Korea's Kim Jong-un promised to 'do my best to achieve a great, ultimately good outcome.'

US President Donald Trump said Thursday he was in "no rush" to secure a deal over Pyongyang's nuclear programme, playing down expectations of an immediate breakthrough in high-stakes talks with North Korean leader Kim Jong Un.

The two men who once traded personal insults and threats of destruction were holding their second meeting in eight months, with analysts stressing it needs to produce more concrete progress than their initial historic get-together in Singapore.

The Singapore summit resulted in cosy images but only a vague commitment from Kim to "work toward complete denuclearisation of the Korean peninsula". Diplomacy has since stalled amid disagreements on what that actually means.

As they sat down for Thursday's formal discussions in Hanoi, Trump said he was in "no rush" to seal a deal and that "speed was not that important" to him as long as the North's pause in missile and nuclear testing continued.

"I can't speak necessarily for today, but I can say that this, a little bit longer-term, and over a period of time, I know we're going to have fantastic success with respect to Chairman Kim and North Korea," said Trump.

Trump again touted the possibility of impoverished North Korea becoming an "economic powerhouse" if it gave up its nuclear arsenal -- an outcome analysts say is extremely unlikely.

Kim is looking for relief from sanctions imposed on the North because of its weapons programmes, which saw tensions soar in 2017 before a wave of detente.

The Pyongyang strongman said there were "people who hold a sceptical view of our meeting" but pledged to seek "great, ultimately good results".

"I think watching us have a great time will be like watching a scene from a fantasy movie," he added.

The North maintains total control over every aspect of Kim's domestic appearances, but he even answered a shouted question from a foreign reporter -- believed to be unprecedented -- saying he was "not pessimistic" about the outcome.

The state-run Rodong Sinmun newspapers plastered photographs of their first Hanoi handshake on Wednesday over its front page, one of them appearing to show Trump bowing slightly as he took Kim's hand.

The two men have again displayed outward signs of an unlikely diplomatic bromance in Hanoi, clasping hands and appearing to share jokes on Wednesday.

Looking relaxed but appearing to say little, they indulged in a poolside stroll Thursday around the gardens of the luxury Metropole Hotel, a Colonial-era building that has played hosts to stars ranging from Charlie Chaplin to Brad Pitt.

It echoed a garden walkabout in Singapore, where the two men bonded over Trump's hulking car, the "Beast", with the US president allowing the younger man a glimpse inside.

It was a far cry from the height of missile-testing tensions in 2017 when Trump slammed Kim as "rocket man" and the younger man branded the American president a "mentally deranged US dotard".

The summit was "pageantry for Trump and brings Kim more credibility on the world stage as a responsible, rational actor", the Stimson Center's David Kim told AFP.

"But I would define success in terms of outcomes. A decent outcome if we can get some concrete and verifiable commitments toward denuclearisation," he said, although the US would have to "trust but verify".

But scandal back home in Washington threatens to distract Trump with his former personal lawyer and fixer Michael Cohen calling him a "racist" and a "conman" during a congressional hearing.

The president already showed he had the testimony at the back of his mind when he tweeted about it before his first meeting with Kim, saying Cohen -- who has been sentenced to three years in jail -- was "lying in order to reduce his prison time".

In addition to relief from biting sanctions, Kim is also seeking security guarantees for him and his regime.

One carrot could be a declaration on the Korean War, which ended in 1953 with an armistice, not a formal peace treaty. Asked about that before Wednesday's dinner, Trump merely replied: "We'll see."

Also mooted is the possibility of opening liaison offices, the first step on the road to normalising diplomatic relations.

In return, Kim might pledge to destroy North Korea's decades-old Yongbyon nuclear complex, which has long been at the heart of Pyongyang's atomic development but remains shrouded in secrecy -- and North Korea has promised to mothball it twice before.

Trump had already tempered expectations in the run-up to the Hanoi summit, saying he was content if North Korea continued its pause in nuclear and missile testing.

In Vietnam, Trump has frequently pointed to the recent history of the host country -- once a war-torn foe of the United States, now enjoying an economic boom with the growth of more than seven per cent.

Ahead of the talks, he hailed Kim as a "friend" and said North Korea could enjoy an "AWESOME" future if it gave up its nuclear weapons.