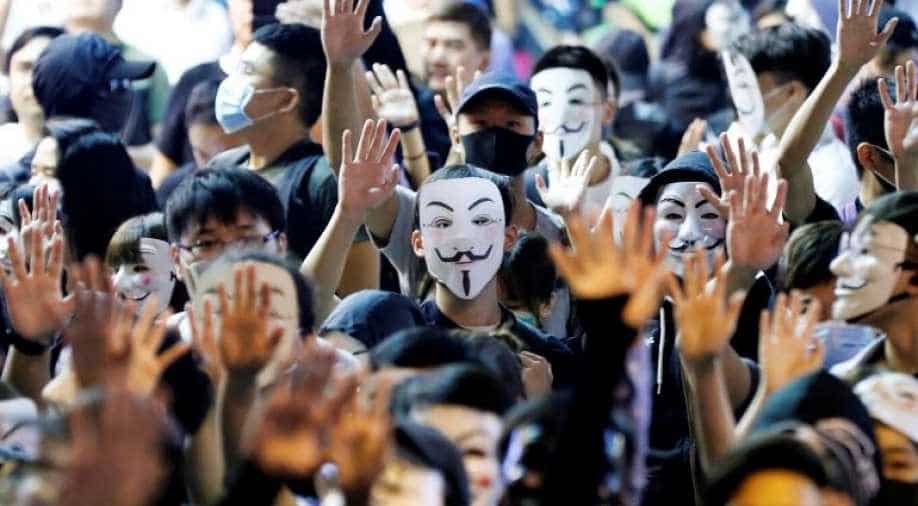 Some protesters in Hong Kong, angry at perceived Chinese meddling in its freedoms, have called for independence in sometimes violent unrest, a red line for Beijing.

The Chinese Communist Party said on Tuesday it would "perfect" the system for choosing the leader of Hong Kong after months of anti-government protests, as police in the ex-British colony fired water cannon to break up a Guy Fawkes-themed march.

The party said in a statement it would support its "special administrative region" of Hong Kong, which returned to China in 1997, and not tolerate any "separatist behaviour" either there or in neighbouring Macau, an ex-Portuguese colony that was handed back to Chinese rule two years later.

Some protesters in Hong Kong, angry at perceived Chinese meddling in its freedoms, have called for independence in sometimes violent unrest, a red line for Beijing. China denies interference.

As the party statement was released by Xinhua news agency, Hong Kong leader Carrie Lam said she had held a short meeting with Chinese President Xi Jinping in Shanghai.

"He expressed care and concern about Hong Kong, especially given the social disturbances that we have seen in the last five months and he expressed support for the various actions taken by Hong Kong Special Administrative Region government," she told reporters.

Referring to the foundation of the 1997 deal under which Hong Kong reverted to Chinese rule, Lam said: "...In strict accordance with the principle of 'one country, two systems' (we will continue) upholding the rule of law and trying to put an end to the violence."

Lam denied widely reported rumours that her government was considering an amnesty for protesters charged with offences, one of the demands of the protesters. "In simple terms, it will not happen," she said.

Some protesters vandalised traffic lights and a restaurant perceived as being pro-Beijing, prompting police to move in with the water cannon, near the science museum, as they have done on many nights during five months of demonstrations. Some protesters were detained while others ran off.

Guy Fawkes Day, also called Bonfire Night, is celebrated with fireworks and bonfires every Nov. 5 in Britain. Effigies of "guys" are burnt, marking the night in 1605 when Fawkes was arrested for a "gunpowder plot" to blow up parliament.

“We are here to tell the government that we are not afraid of them and that they should be afraid of us," masked protester Pete, 27, said in front of the huge, harbourfront neon Christmas decorations.

China's Communist Party, in a lengthy statement about decisions reached at a key leadership meeting known as a plenum last week, said it would improve the national security system in Hong Kong, as well as in Macau, though it gave no details.

The party decided to "establish a robust legal system and enforcement mechanism to safeguard national security in the special administrative regions and support them to strengthen law enforcement".

The party will "perfect" the appointment and dismissal mechanisms for the leaders and senior officials of the two territories, it added, reiterating comments from a Chinese parliament official last week. Again, no details were given.

It will also perfect the system under which the party has full jurisdictional power over Hong Kong, in accordance with the constitution, Xinhua said.

The demonstrations in Hong Kong began over a since-scrapped extradition bill and escalated in mid-June against China. Protesters have kept up their calls for universal suffrage and an independent inquiry into alleged police brutality, among other demands.

The protests, which pose the gravest challenge to Xi since he came to power in 2012, have received broad support.

The number of people who take part in the mostly weekend rallies has dwindled from the millions who participated in June, but violence and vandalism have escalated. Authorities have refused permits for many recent protests, making them illegal from the outset and activists liable to be arrested.

There have been many injuries in the protests, but no deaths. A 22-year-old student at a Hong Kong university who fell during protests at the weekend was in critical condition on Tuesday, hospital authorities said.

A man stabbed at least two people on Sunday and bit off part of a politician's ear before being beaten by protesters. A 48-year-old suspect has been charged with wounding.

Lam expressed her sympathies for the wounded, singling out the 22-year-old student.