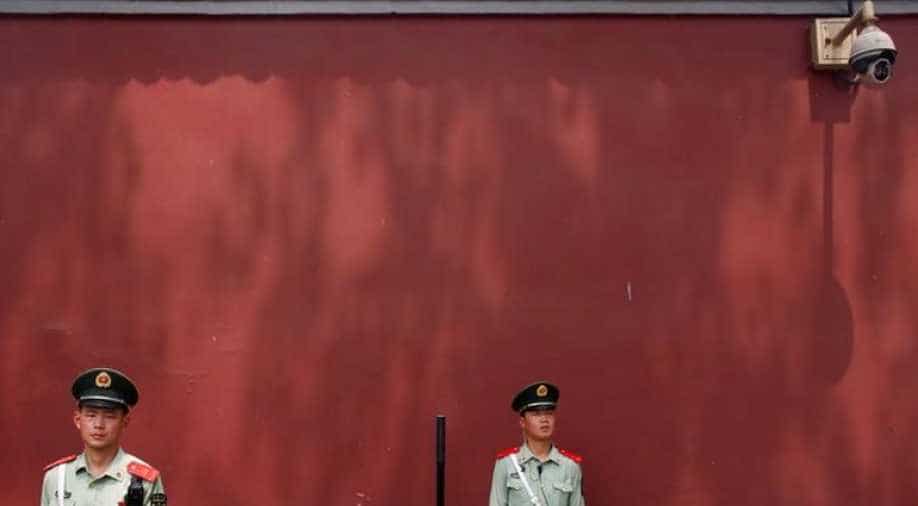 One advocacy group said the draft proposes to give state security agencies 'broad authority to question anyone, read or collect any material, and install surveillance devices or set up on-site posts inside any office or commercial building'

Half a dozen activists contacted by Reuters say they already face extensive surveillance by security agents and cameras outside their homes. Messages they post on social media, including instant messaging applications like WeChat are monitored and censored, they said.

The draft of a new law to formally underpin and possibly expand China's intelligence gathering operations at home and abroad was released on May 16.

However, the law was vaguely worded and contained no details on the specific powers being granted to various state agencies.

The law will give authorities new legal grounds to monitor and investigate foreign and domestic individuals and bodies in order to protect national security, it said.

Public consultation for the draft ends on June 4. It is unclear when the final version may be passed.

Hu Jia, a well-known dissident, said the release was met with fear and despair in his circle of reform-minded activists, where it was seen as a sign of strengthening resolve in the ruling Communist Party to crush dissent.

"Before, the party acted in secret, but now they have confidence to openly say: 'We are watching you'," Hu told Reuters.

"The law is also partly to frighten people ahead of the 19th Party Congress; to tell them to be careful, to be quiet," he added. Hu was referring to the once in five years congress of the Communist Party likely to be held in October or November in which President Xi Jinping is likely to further cement his hold on power by appointing allies into the party's inner core.

Xi became head of a newly established national security commission in 2013 and has since overseen a raft of legislation to expand legal rights and obligations for the security apparatus in the name of safeguarding China.

Western governments and rights activists say these measures shrink the space for independent civil society in China. Beijing says that the measures are warranted given its security concerns.

The draft proposes to give state security agencies "broad authority to question anyone, read or collect any material, and install surveillance devices or set up on-site posts inside any office or commercial building," Hong Kong-based advocacy group the Network of Human Rights Defenders said in a statement.

The Ministry of State Security, China's main intelligence agency, could not be reached for comment as it does not have a publicly available telephone number or website.

"The (intelligence law) draft, like the National Security Law (passed in 2014), seems set to give the veneer of legality to intrusive and repressive surveillance activities," said Eva Pils, an expert on Chinese criminal law at King's College London.

The draft gives "very broad definitions of the remit of the law, including everything from threats to national security to promoting the welfare of the people, meaning that essentially anything could be considered to require intelligence-gathering," she said.

Wang Qiaoling, the wife of prominent rights lawyer Li Heping who was handed a three year suspended sentence in April for subversion, told Reuters she has been constantly monitored since Li was detained two years ago.

"At the time, I arranged by phone calls and on WeChat to meet with two lawyers who would represent my husband, but on the day we arranged to meet, they were both blocked at home by public security agents," she said.

"This was when I realised all my communication was being monitored," she added.

Almost all families of the dozens of lawyers and activists who were detained in a 2015 crackdown faced similarly pervasive surveillance measures, she said.

"Once, last year, when they tried to stop me leaving my home, I told them: 'You know that this is illegal? There is no legal procedure for what you are doing.'," Wang said. "State security wilfully interpreting the law, this is a very scary thing."