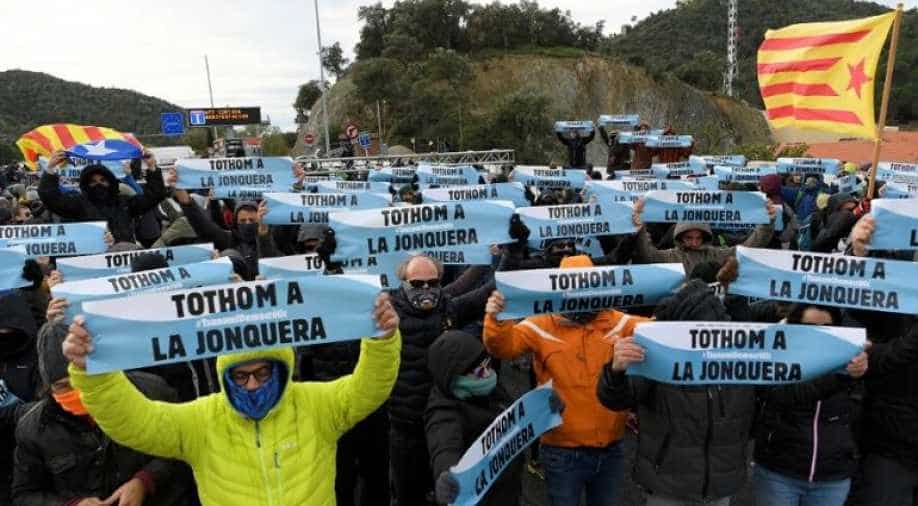 Protesters hold banners reading "All to La Jonquera" as they block the AP-7 highway at the Spanish-French border in La Jonquera northern Spain, on November 11, 2019 during an action called by Tsunami Democratic movement for civil disobedience actions. Photograph:( AFP )

Catalonia's regional road department confirmed the motorway was cut in both directions at La Jonquera.

Catalan separatist activists blocked traffic on Monday on a motorway linking Spain and France, in a fresh protest against the sentencing last month of nine of their leaders to lengthy jail terms.

Demonstrators cut the AP7 motorway at La Jonquera near the city of Girona in eastern Spain, a day after a repeat general election in which Prime Minister Pedro Sanchez's Socialist emerged as winners but weakened, while far-right party Vox surged to third place on the back of its hardline stance against separatism.

Dozens of vehicles blocked the motorway near the border with France while some 300 people set up a barricade, according to an AFP photographer at the scene.

Some demonstrators began to set up a stage and speakers which they brought to the scene in vans.

Catalonia's regional road department confirmed the motorway was cut in both directions at La Jonquera.

The protest was called by a new, mysterious organisation called "Democratic Tsunami" which last month sent thousands of people to block access to Barcelona airport in a protest which ended in clashes between demonstrators and police.

"This mobilisation is a cry to the international community so that it makes the Spanish state understand that the only possible path is to sit down and talk," the group said in a message sent to its followers on encrypted messaging service Telegram.

Radical separatist group CDR also called on its supporters to head to La Jonquera to block the highway.

Catalonia was rocked by days of mass, sometimes violent, pro-independence rallies after Spain's Supreme Court on October 14 sentenced nine politicians and activists to jail for up to 13 years for their role in a failed secession bid in 2017.

Demonstrators have frequently cut road and rail links between Spain and France while many shops in downtown Barcelona have been shut during the rallies and there are growing concerns about the impact of the unrest on business in Spain's second-largest city.