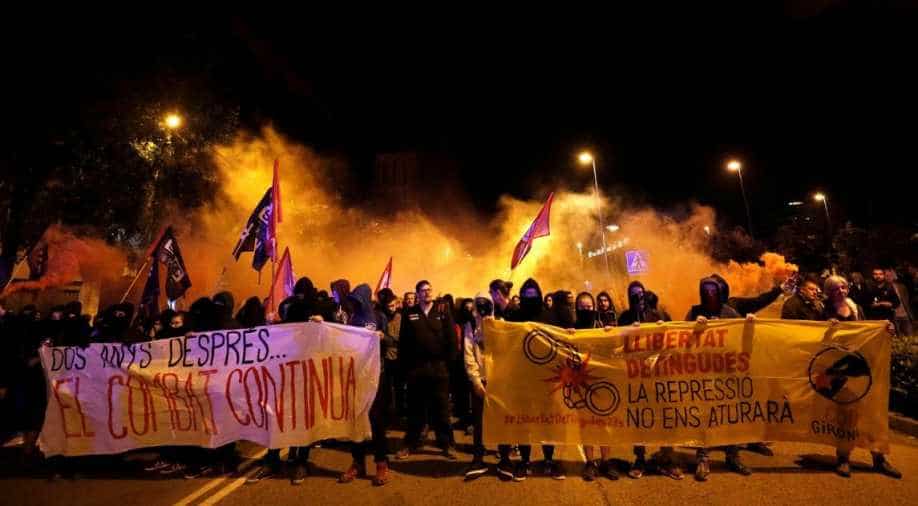 There were tense moments as masked protesters, singing the Catalan anthem, threw eggs and other objects at the police and tried to barricade the road with waste bins.

Waving separatist flags and chanting "freedom for political prisoners" thousands of supporters of Catalan independence gathered in Barcelona for concerts and rallies on Saturday, while some protesters faced off with police, a day before Spain heads to the polls for a general election.

In one protest called by CDR, another separatist group that favours direct action such as blocking highways, several hundred demonstrators tried to reach the Spanish police headquarters, the flashpoint of some of last month's riots, but were blocked by police.

There were tense moments as masked protesters, singing the Catalan anthem, threw eggs and other objects at the police and tried to barricade the road with waste bins.

Officers responded by chasing them through central Barcelona's restaurant-packed streets until the crowd dispersed.

Local media said there was no immediate word of any arrests. A spokesman for the Catalan police could not confirm whether any arrests were made during the protest.

The election campaign has been dominated by the Catalonia separatist issue after weeks of sometimes violent protests that followed the Supreme Court's ruling on the Catalan leaders.

"We have to be imaginative," she said. "We have to do things that have impact in the world," she added, arguing that separatists were not taken into account in the rest of Spain.

But away from the protests, some Barcelona residents were sceptical that things could change for the region, where separatism is a highly divisive issue.

"I see (it as) very complicated for the situation in Catalonia to be resolved, because at the national level, that is to say at the Spanish level, I do not see that there is a great desire to do it," said Maria Rodriguez, a 33-year old actress.

Democratic Tsunami, which advocates non-violent actions, called on supporters to demonstrate across the region on Saturday afternoon and suggested there would be more to come if Spanish politicians refuse to engage with separatists.

"As long as there is no dialogue, instability will continue," it said in a statement late on Saturday. "The (Spanish) state will not be able to continue with repression without having a citizens' response."

The group, whose leadership remains unknown, said the controversial app it uses to organise events had received more than 1,000 attacks.

The campaign for Catalan independence has been mostly peaceful for years, but some protests turned violent last month, with a minority of mostly young demonstrators torching cars and launching petrol bombs at police.

The goal is to "guarantee that everyone can exercise their right to vote," the spokesman said.

A Catalan police spokeswoman declined to comment on the force's security plans.

Carme Martin, 68, who attended Saturday's protest said she could understand some of the youth's frustration after last month's riots in Barcelona.

"I don't like violence but (I understand) if it is defensive," she said.

The floating hospitals!: Everything you to want to know about USNS Mercy and Comfort