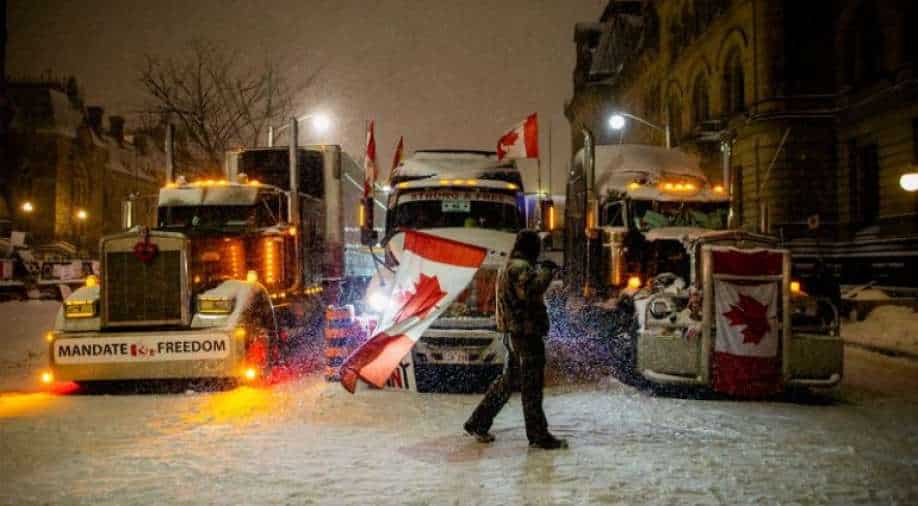 Protesters blocked several land crossings with the United States, including the busiest, the Ambassador Bridge which connects to Detroit, for six days, hurting both economies. Photograph:( Reuters )

The truckers' protests started against vaccine mandates for cross-border drivers, a measure in place in the United States, too. But slowly it spread across Canada and morphed into an anti-government movement

Canadian police are poised to clear out on Friday hundreds of truck drivers from Ottawa who have staged a three-week-long protest against pandemic restrictions that has crippled the capital and prompted Prime Minister Justin Trudeau to assume emergency powers for the first time in more than 50 years.

The drivers, joined by thousands of demonstrators and some 400 vehicles, turned the streets around Parliament into a noisy party zone since first arriving on Jan. 28, in what has become one of the worst crises to hit Trudeau since he took power in 2015.

Police made a handful of arrests Thursday evening, including of Chris Barber, one of the main fundraisers and organisers, after authorities said action was imminent. Barber went without resistance after police told him he was being arrested for mischief.

"We absolutely are committed to end this unlawful demonstration. We have the plan, we have the commitment, we have the resources," interim police chief Steve Bell told reporters on Thursday. Police will set up a perimeter with 100 checkpoints around downtown to stop people without legitimate reason from entering, he said.

"This weekend will look very different than the past three weekends," he added. Previous chief Peter Sloly quit this week amid residents' fury about what they saw as police inaction.

The truckers' protests started against vaccine mandates for cross-border drivers, a measure in place in the United States, too. But slowly it spread across Canada and morphed into an anti-government movement. Protesters blocked several land crossings with the United States, including the busiest, the Ambassador Bridge which connects to Detroit, for six days, hurting both economies.

Calling the blockades a threat to democracy, Trudeau invoked emergency measures on Monday giving his government temporary powers to end the unrest. Government officials said they were worried about extremists causing violence.

Many protesters on Parliament Hill said they would not leave until their demands were met.

"End the mandates, give us our rights and this is over," said Chris Dacey on Thursday. "We'll all go back to our families."

The border blockades turned the pressure on Trudeau to act swiftly, and US President Joe Biden asked him to use federal powers.

"The illegal blockades and occupations have to stop and the borders have to remain open," Trudeau told legislators on Thursday as Parliament started debate on the Emergencies Act, which needs to be passed within seven days of an announcement.

But the official opposition Conservative Party says there was no need for the Emergencies Act, especially since the border blockades are over. Conservative Parliamentarian Jeremy Patzer told the House of Commons on Thursday that people around the world were alarmed to see Trudeau "come down on peaceful protesters with a sledgehammer."

"It is absolutely shameful," he added.