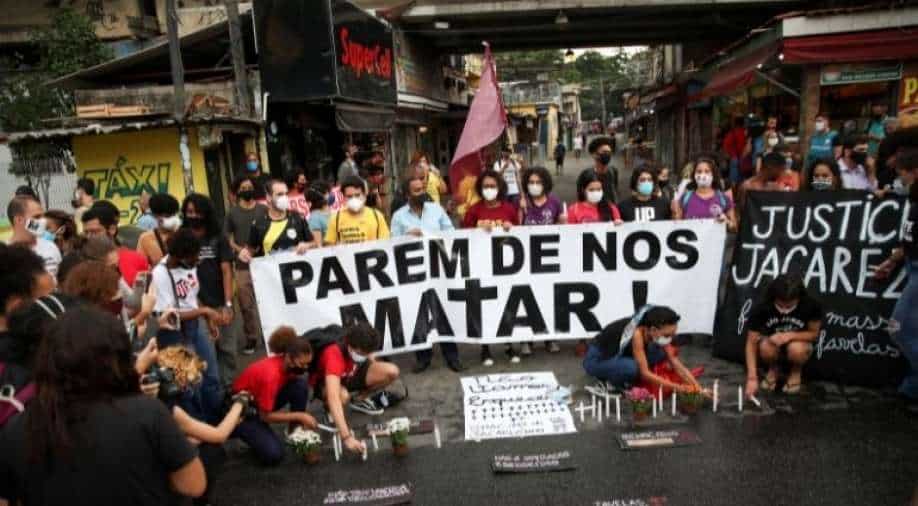 People attend a protest against police violence outside Jacarezinho slum after a police operation which resulted in 25 deaths in Rio de Janeiro, Brazil Photograph:( Reuters )

The shootout killed a police officer and 24 others in Rio's Jacarezinho neighborhood on Thursday. Police said it was the deadliest operation in Rio state since a 2005 raid on the city's northern outskirts

A Supreme Court justice called on Friday for Brazil's top prosecutor to investigate Rio de Janeiro's deadliest police raid in over a decade, which has drawn condemnation from the United Nations, human rights groups and local activists.

The shootout killed a police officer and 24 others in Rio's Jacarezinho neighborhood on Thursday. Police said it was the deadliest operation in Rio state since a 2005 raid on the city's northern outskirts.

"The facts reported seem grave and, in one of the videos, there are indications of acts that, in theory, could amount to arbitrary execution," said Judge Edson Fachin.

Last year, Fachin issued an order for Rio police to suspend operations during the coronavirus pandemic in the informal shantytowns known as favelas - "except in absolutely exceptional cases" that had been pre-approved by prosecutors.

The United Nations human rights office called on Friday for an independent probe of the latest deadly operation in a history of "disproportionate and unnecessary" police force.

Rio's police are among the most deadly in the world, but right-wing President Jair Bolsonaro has argued that if anything they need fewer restrictions on lethal force.

Asked about those killed in Jazarezinho on Friday, Vice President Hamilton Mourao said they were "all bandits."

Jacarezinho residents and activists marched outside a police station on Friday with a banner demanding, "Stop killing us."

"They would have surrendered, but the police came in to kill, kill, kill. Twenty-five mothers crying. I want my son," said Adriana Santana Araújo, 36, mourning the loss of her 23-year-old son.

Daniele dos Santos said her 32-year-old husband had gone out to buy bread and was caught in the crossfire.

"He got a bullet in the leg and the cop ended up executing him. He was alive. He wasn't armed. He was just in the wrong place at the wrong time," she said.

Police said everyone killed but the officer were suspected drug traffickers reacting violently to police presence.