More than 250,000 people have signed a petition calling for the Sydney fireworks to be scrapped, with funding redirected to drought and bushfire relief. #AustraliaBushfire #Australia #Sydney #WION

At least 4,000 people are trapped on the coastal town of Mallacoota

Three people caught in bushfires in Australia's southeast are feared dead, officials said on Tuesday as thousands of tourists, residents remain stranded because of fires encircling the region.

On Monday, a volunteer firefighter died while combating bushfires that have destroyed 3 million hectares of land in Australia.

Thousands of residents and tourists are trapped on a beach in southeast Australia as massive bushfires ringed the area making the escape from the land difficult. At least 4,000 people are trapped in the coastal town of Mallacoota because of the bushfires that cut off main in and out road of the town. Residents and holiday makers were forced to head to the gymnasium or waterfront.

This photo needs to be the front page of every paper in Australia for the first day of the new decade. Welcome to the 20’s, Australia. #mallacoota #australiaburns pic.twitter.com/6bcswM3yeU

The authorities said that nearby fires were causing extreme thunderstorms and "ember attacks".

"We've got a fire that looks like it's about to impact on Mallacoota,"  Victoria's Emergency Management Commissioner Andrew Crisp told public broadcaster ABC. He also said firefighters have been deployed to rescue the stranded people.

"We've got three strike teams in Mallacoota that will be looking after 4,000 people down on the beach there," Crisp said. "We're naturally very concerned about communities that have become isolated."

Reportedly, preparations are also underway for a sea or airborne rescue if required. 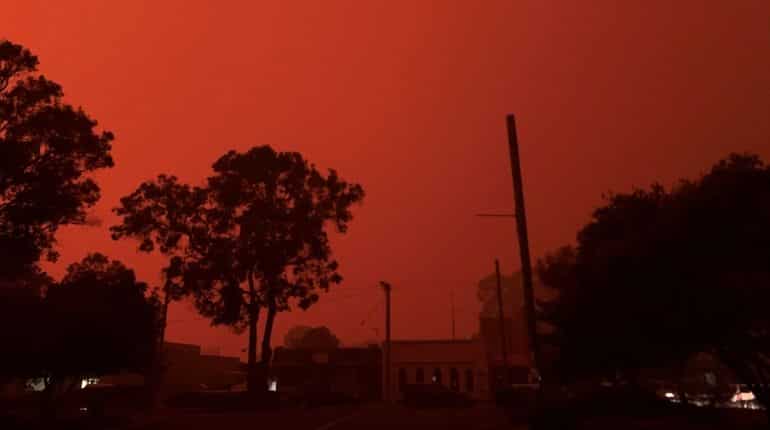 Many residents said on social media said that they were wearing life jackets if they needed to seek refuge in the water to escape fires. Some social media posts also showed blood-red, smoke-filled skies.

Bushfire-affected areas can reach a temperature of up to 100 degrees, killing anybody within that region even before the flames reach them.

The ocean is the "last resort option" as per Victoria's emergency management agency.

In New South Wales coast too, similar warnings were made that many "dangerous" fires are spreading rapidly and people in the region should take shelter on beaches if necessary.

"These fires moved quickly this morning. They pose a serious threat to life. Do not be in their path. Avoid bushland areas. If the path is clear, move to larger towns or beaches to take shelter," New South Wales Rural Fire Service said.