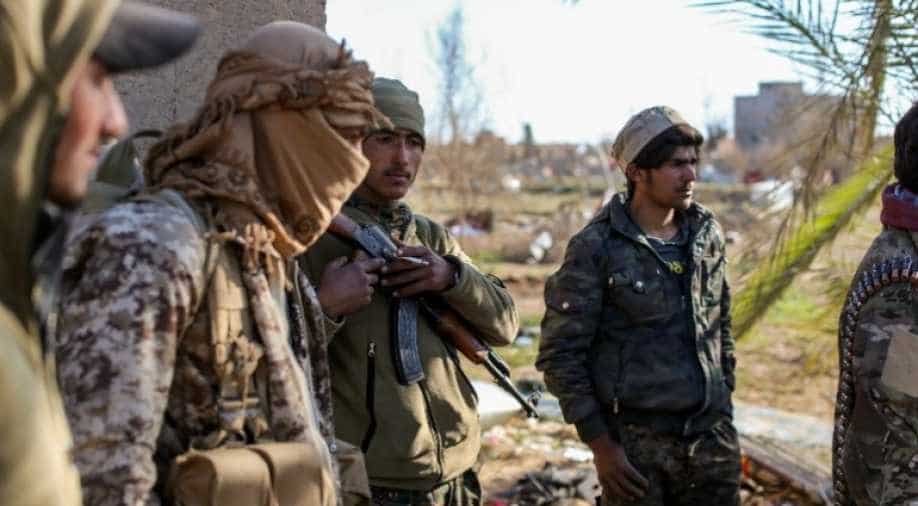 A ragged tent encampment in the eastern Syrian village of Baghouz is all that remains of a once-sprawling IS "caliphate" declared in 2014 across large swathes of Syria and neighbouring Iraq.

Kurdish-led forces said around 2,000 people, mostly jihadists, surrendered from the Islamic State group's last scrap of territory in Syria Tuesday, as air raids and shelling resumed after a brief lull.

A ragged tent encampment in the eastern Syrian village of Baghouz is all that remains of a once-sprawling IS "caliphate" declared in 2014 across large swathes of Syria and neighbouring Iraq.

The US-backed Syrian Democratic Forces has been trying to crush holdout IS fighters for weeks but the mass outpouring of men, women and children from the riverside hamlet has bogged down its advance.

Backed by the US-led coalition, the SDF renewed its assault Sunday after warning remaining IS fighters their time was up.

Air strikes and shelling have since pummelled Baghouz three nights in a row, killing scores of fighters and prompting hundreds of jihadists and their relatives to surrender.

Thousands handed themselves over Tuesday, after a deluge of fire hit the IS encampment the previous night.

"Around 2,000 people, mostly fighters, have handed themselves over today," SDF spokesman Adnan Afrin told AFP, without adding how many remain inside.

The SDF and the US-led coalition resumed shelling and air strikes on the last IS bastion Tuesday evening, interrupting a brief lull in fighting that had taken hold during the day to allow for people to surrender.

An AFP correspondent near the front line heard warplanes rumbling overhead, as the sound of mortar fire and explosions rang from the IS encampment.

Dozens of SDF fighters massed at the entrance of the village of Baghouz on Tuesday evening.

Sherif, the unit commander, said his force was preparing to storm the jihadist redoubt.

"We readied ourselves today and our spirits are high," he told AFP.

"We will enter with full force and we will be at the forefront" of the advance, said the fighter who has been battling jihadists for years.

Earlier Tuesday, Ali Cheir, an SDF unit commander, said his force and the coalition were pummelling the IS enclave at night to flush out jihadists.

"The objective of our advance is to terrorise IS fighters so they surrender, and for the civilians to come out," said the 27-year-old.

Since December, around 60,000 people have left the last IS redoubt, according to the Britain-based Syrian Observatory for Human Rights, around a tenth of them suspected jihadist fighters.

The United Nations said the numbers from Baghouz arriving in one Kurdish-run camp further north for the displaced were smaller than in previous weeks.

It said they were reaching the camp in a worse state than before.

The UN's food agency said it is concerned about their wellbeing.

"On Sunday night more than 3,000 people, mostly women and children in a poor state, reached the camp," the WFP said.

"WFP is deeply concerned about the welfare of tens of thousands of people recently arriving at the Al-Hol camp," it said Tuesday.

Around 113 people -- two-thirds of them children under five -- have died en route to the camp or shortly after arriving since December, the UN's humanitarian coordination office OCHA says.

At the height of its brutal rule, IS controlled a stretch of land in Syria and Iraq the size of the United Kingdom.

The total capture of the Baghouz camp by the SDF would mark the end of the cross-border "caliphate" it proclaimed more than four years ago.

But beyond Baghouz, IS retains a presence in eastern Syria's vast Badia desert and sleeper cells in the northeast.

The jihadists have continued to claim deadly attacks in SDF-held territory in recent months, and the US military has warned of the need to maintain a "vigilant offensive".

The group released a video late Monday allegedly showing jihadists in Baghouz, quietly defiant in the face of the advancing SDF.

"If we had thousands of kilometres and now we only have some kilometres left, it is said we have lost -- but God's judging standard is different," said a man named Abu Abdel Adheem.

"The battles are not over," he said, sitting on the ground in a circle with two men and a young boy in a hooded jacket.

Baghouz is the latest front on Syria's complex civil war, which has killed more than 360,000 people since 2011.