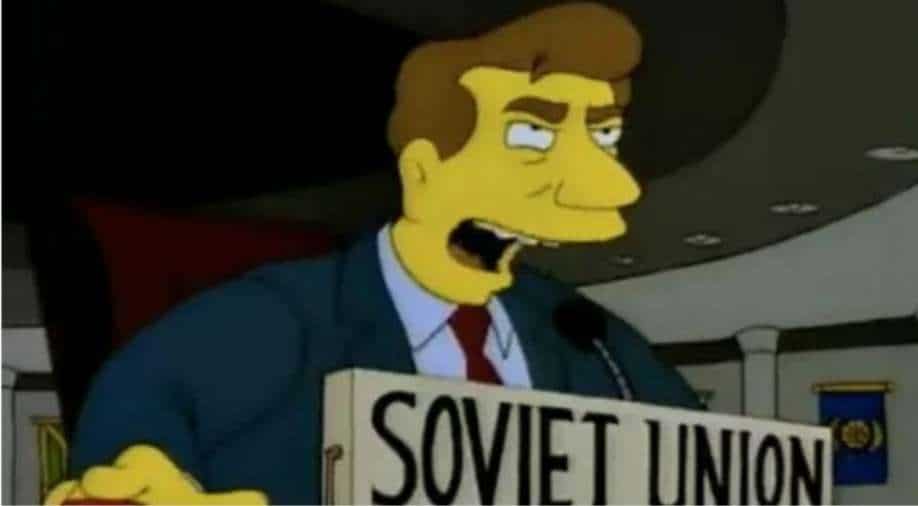 The Simpsons had predicted the current Russia Ukraine conflict in an episode in 1998 Photograph:( Twitter )

In one of its episodes, 'The Simpsons' had predicted the return of the Soviet Union and the emergence of the Cold War once again.

What 'The Simpsons' think today, the world thinks tomorrow. The show seems to have predicted the current Ukraine-Russia crisis way back in 1998.

In one of its episodes, the show had predicted the return of the Soviet Union and the emergence of Cold War once again.

A clip from the popular series is being widely shared on social media that shows how the West attempts to find a solution to stop an 'all-out war'. The clip is from an old episode of 'Simpsons Tide' which reportedly aired in March 1998, at a time when Boris Yeltsin was the President of the Russian Federation.

The episode shows Homer Simpsons joining the Navy and how he gets into a shooting match with a Russian submarine.

The clip that is going viral on social media shows Russian ambassador to the UN revealing the collapse of the Soviet Union and was just the deceive the US. The clip also hilarious brings back Lenin to life who breaks out of his glass coffin saying 'must crush capitalism'.

Twitter shared the clip widely and pointed out that the current situation in Ukraine was first called by 'The Simpsons'.

The Simpsons have an auror trapped in a basement somewhere

The Simpsons did it again. #Russia #Russland #Ukraine #Putin pic.twitter.com/W1yzODChnm

Did Russia/Soviet Union promise the Ukraine their safety in 1991? Yes.
Did the Simpsons predict this?
Yep :)#RussiaUkraineConflict #RussiaUkraine #simpsons https://t.co/qFy8IZUhlh

In recent weeks, the US has accused President Vladimir Putin of amassing more than 150,000 troops near Ukraine's borders in preparation for what many fear to be a proper invasion.

US President Joe Biden imposed fresh sanctions on Russia while declaring that invasion of Ukraine had begun as Russian lawmakers gave Putin approval to deploy "peacekeepers" in two Ukrainian regions.

Russia has repeatedly denied plans for such an attack but says it has a duty to protect people living in the two breakaway regions.

Putin on Monday had declared that Russia will recognise Donetsk and Lugansk situated in eastern Ukraine as separate republics while declaring that the Minsk peace agreements on Ukraine's conflict no longer existed.

This isn't the first time that 'The Simpsons' have predicted the future. From Astroworld stampede to Kamala Harris' swearing into the US office as the Vice President to the US Capitol riots- the predictions made on the show have come true in the recent past.