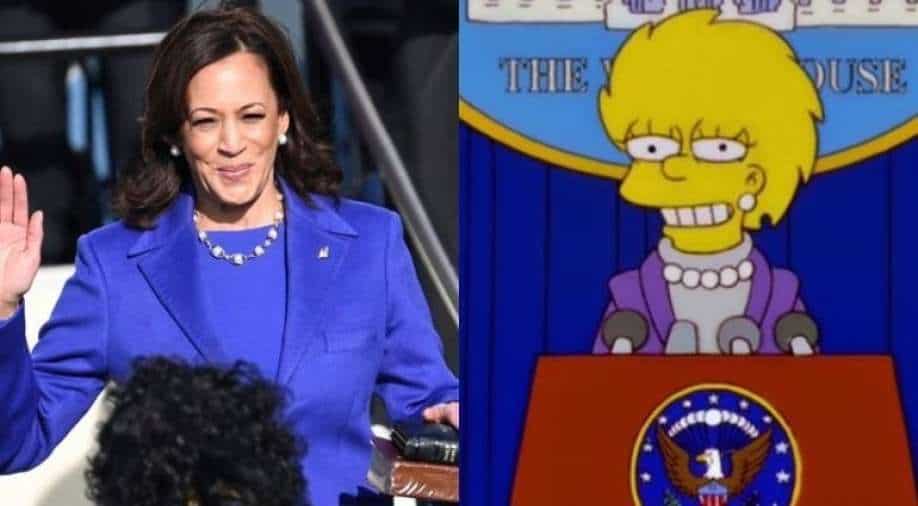 Lisa Simpson wore the same outfit as Kamala Harris in an episode that aired 21 years ago Photograph:( Twitter )

Call it a coincidence or prediction, but popular sitcom 'The Simpsons' seemed to have envisioned US Vice President Kamala Harris' symbolic purple outfit 21 years ago in one of the episodes.

Call it a coincidence or prediction, but popular sitcom 'The Simpsons' seemed to have envisioned US Vice President Kamala Harris' symbolic purple outfit 21 years ago in one of the episodes.

For the historic day, Harris chose a purple dress and coat designed by two black designers. Her outfit was symbolic and a nod to nod to Shirley Chisholm, who was the first black woman to run for US President as part of the Democratic party and the colour symbolised the women's suffragette movement.

While many feel that Harris outfit will go down in history as one of the most iconic dresses worn by a leader, it seems 'The Simpsons' already predicted the outfit- 21 years ago.

Some fans on Twitter pointed out that Kamala's outfit was eerily similar to The Simpsons' character, Lisa's outfit from an episode that aired two decades ago.

Also read: All the predictions that have been made in 'The Simpsons'

In Episode 17 of Season 11 of the show - 'Bart to the Future', Lisa Simpson becomes the first female President of the United States. On her first day at the White House, the grown-up Lisa can be seen wearing the exact same outfit as Haaris did on Wednesday. A purple dress with a coat and a string of pearls around her neck!

THE SIMPSONS HAVE DONE IT AGAIN!!!! pic.twitter.com/iByO67Awq5

Yeah, everything that ever will be has already been on “The Simpsons”. But this is a bit on the nose. pic.twitter.com/SOHKyIzHjn

Not just this, but this particular episode had also predicted Donald Trump's presidency. According to a New York Post, the episode even showed how Trump's presidency would end. In fact, Lisa takes over the post after Donald Trump. In the episode, Lisa tells her advisors that her administration has been left with quite a budget crunch by her predecessor, Trump.

This is not the first time that 'The Simpsons' have predicted the future on several occasions including the recent Capitol Hill violence, the coronavirus pandemic and more.