Did 'The Simpsons' predict the US Capitol Hill riots? The Internet seems to think so 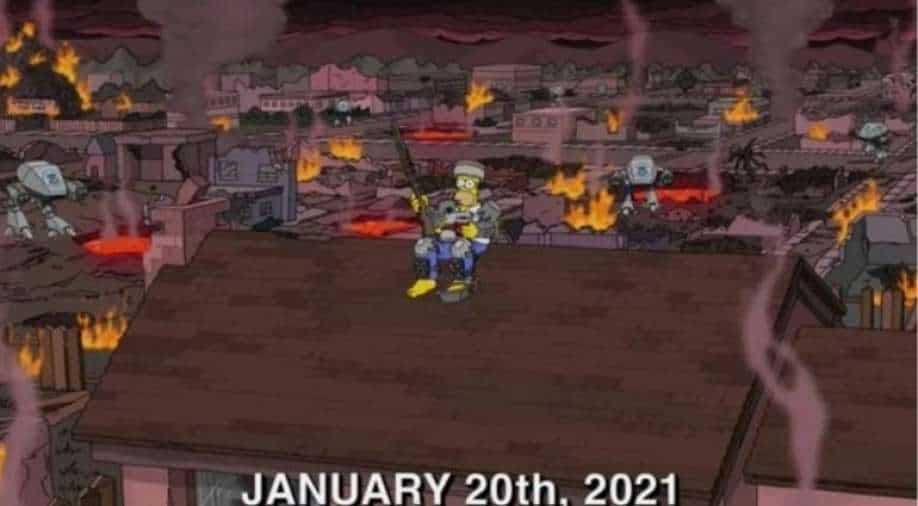 The Simpsons had predicted American Civil War in an episode a few months back Photograph:( Twitter )

Hours after a mob stormed the Capitol building in Washington, a user on Twitter made a rather interesting observation about an episode of 'The Simpson' that seemed eerily similar to Wednesday's incident.

Hours after a mob stormed the Capitol building in Washington, a user on Twitter made a rather interesting observation about an episode of 'The Simpson' that seemed eerily similar to Wednesday's episode.

Pro-Trump supporters stormed inside the Capitol building as a sign pf protest against the US election results.

A few months earlier, an episode of The Simpsons seemed to have shown events panning out in a similar fashion.

The Simpsons predicting #civilwar2021 and riots in America They’ve done it again pic.twitter.com/gkoN49Gz3C

Episode 4 of season 32 of 'The Simpsons' predicted civil war, violent protests, and Trump supporters destroying America. Here, have a look at the clip.

S32, E4, released only a few months ago: https://t.co/aCtllFcvJM

The uncanny similarities to the episode and Wednesday's episode shocked many. Here is how everyone reacted.

You don’t need to be The Simpsons to have predicted this.

See there are somethings that we don't need to speak into existence... this is one of them. 😅😟😐

2021 was doomed when this episode aired

It’s like the Simpsons were the gaslighting Nostradamus for the US.

This isn't the first time that 'The Simpsons' has been in news for predicting things that have rocked the world. They had, back in 2000, predicted Donald Trump taking over America as the President among other things.