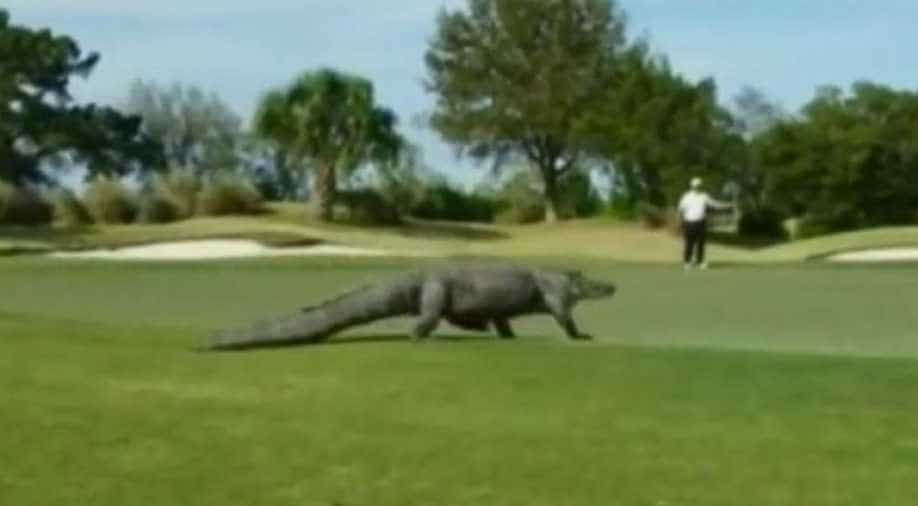 The reptile even scared one of the golfers, who was seen in the video retrieving his putter on the far side of the hole.

A giant alligator was spotted dawdling onto a golf course in Georgia, the United States on a bright sunny day.

He was filmed interrupting a game of golf before dipping into a water feature at The Club golf course in Savannah Harbor.

The reptile even scared one of the golfers, who was seen in the video retrieving his putter on the far side of the hole.

Ed Vance, who took the footage, said that alligators are a common occurrence on the course, however, this particular alligator's size stood out.

"When I noticed how big this one was I instinctively reached into my golf bag, grabbed my phone and started filming it. I thought my four-year-old son would love it. We were all in awe of how massive it was," he said.

He added, "Once it got on the green you could hear the "thud" with every step...like you would expect to hear from a dinosaur or something!"

MASSIVE 9-foot alligator surprises these Savannah golfers and plops down on the 17th hole. 😲😲😲😲😲😲

According to The Georgia Department of Natural Resources, there are approximately 200,000-250,000 alligators in the state of Georgia.