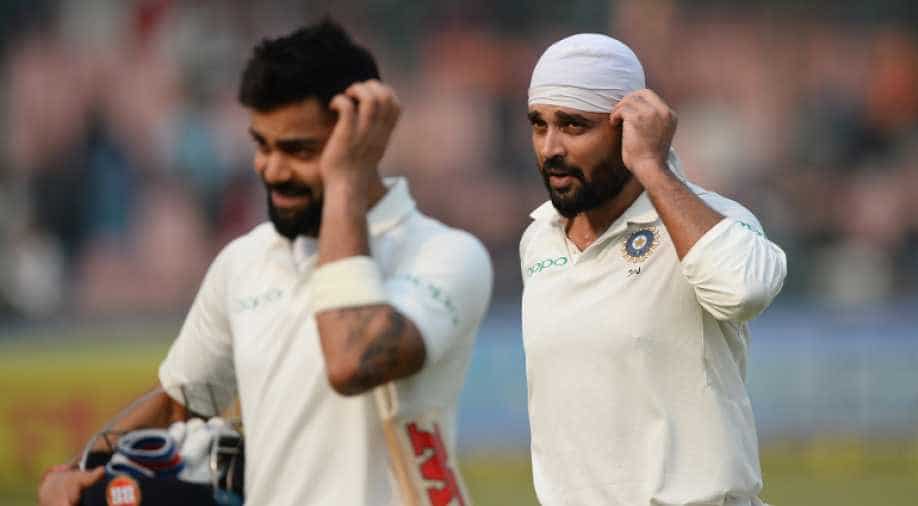 Kohli (94 batting), who has taken his batting to an altogether different level, is inching towards his 20th Test hundred. Photograph:(AFP)
Follow Us

Captain Virat Kohli made a mockery of a sub-par Sri Lanka in the company of centurion Murali Vijay as India raced to 245 for two at tea on the first day of the third and final cricket Test.

Kohli (94 batting), who has taken his batting to an altogether different level is inching towards his 20th Test hundred. The skipper made it look like a knocking session against a bowling attack, which at times looked inferior to a middle-run first-class side playing Ranji Trophy.

Starting the post-lunch session at 17 and his partner Vijay on 57, by the tea break, it was the skipper batting on 94 and Vijay on 101.

Together they added 167 runs in 36.4 overs for the third wicket during another listless session for the visiting side.

The gulf between the two sides was more evident as Kohli at times merely pushed the balls through the gaps and fetched boundaries at will.

None of the Sri Lankan bowlers was even capable of bowling to the set field as Vijay hit nine boundaries in 170 balls and Kohli 14 off 101 deliveries.

The Lankan attack's plight could be gauged by the fact that they were hit for 31 boundaries in just two sessions.

Pacer Lahiru Gamage (1/45) would provide half-volleys on the off-stump keeping the cover area vacant and the skipper would gleefully punch it through the region. When the off-side cordon was plugged, Gamage would bowl on the legs for him to tickle to fine leg boundary. With his military medium pace, when he tried to bounce Kohli, the skipper rocked back and pulled him through mid-wicket.

Off-spinner Dilruwan Perera (1/73) was given a five- pronged leg-side field expecting him to bowl the classical off-breaks. He bowled straight with no protection on the off- side.

Kohli used his supple wrists to get a boundary through the cover region and then hit a late cut for good measure.

Chinaman Lakshan Sandakan (1/70) couldn't find his length as he was easily negotiated by Kohli and Vijay.

Kohli's career-fastest Test half-century came off 52 balls and in no time he matched Vijay's score with both racing towards three-figure mark.

Vijay reached his personal landmark - 11th in longest version with a back-foot cover drive off chinaman Lakshan Sandakan. He did a little celebratory jig after that.

While the home team scored runs at a fast clip, both Shikhar Dhawan (23) and Cheteshwar Pujara (23) would certainly be lamenting the missed chance on one of the flattest decks on offer.

Earlier, Sri Lankan skipper Dinesh Chandimal was spot on in his assessment of the track as it was another typical low bounce batting paradise at Kotla, where Vijay made merry from the word go after Kohli rightly opted to bat.

Vijay started with a streaky four past gully off Suranga Lakmal followed by one off his hips. In the next over from Lahiru Gamage, there was a firm jab past the bowler that went to the boundary. Vijay hit seven boundaries during that first session.

Dhawan started with a cover drive and hit three more boundaries before he top-edged a sweep shot off Perera to be caught at deep backward square leg by Lakmal, who lost his footwear in the process. This was Dilruwan?s 100th Test wicket.

Pujara was as watchful as he had been all these years before unleashing his range of strokes with the visiting team's bowling attack looking sub-standard.

However, he fell into a trap when Chandimal deployed a leg slip for Pujara and Gamage fired one into his body. Pujara tried to whip it off his hips but Sadeera Samarawickrama was positioned exactly for that catch.

However, there was no stopping Vijay, who treated all bowlers with equal disdain. He hit a flowing cover drive off Gamage and then flicked him through the vacant mid-wicket region for another boundary.