Proudest day of my life, until I have kids: England captain Leah Williamson reacts after Women's Euro triumph 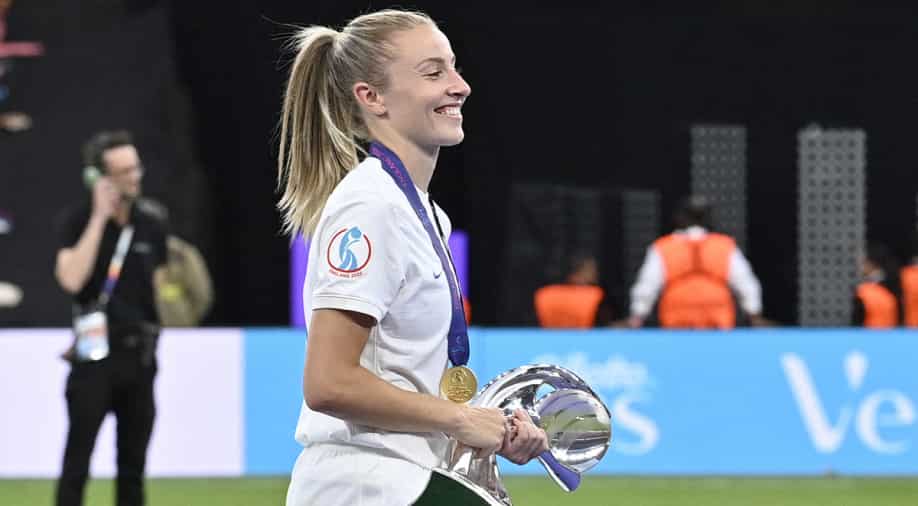 England captain Leah Williamson said it was the proudest day of her life after winning Euro 2022. Photograph:( AFP )

England captain Leah Williamson was elated after guiding her team to their maiden Women's Euro title on Monday. Williamson said it was the proudest day of her life until she has kids.

England defeated Germany 2-1 in a nail-biting final to lift their maiden Women's Euro title on Sunday (August 01). It was an enthralling final in front of a sold-out crowd at the Wembley Stadium where hosts England came out on top after Chloe Kelly scored the winner in extra time to officially 'bring it home' for the Lioness, who had a memorable campaign in the Women's Euro this year.

A record 87,192 people attended the much-awaited final between England and Germany at Wembley making it a historic affair. It was the largest crowd at any Euro game across men's and women's football in the history of the tournament. England were certainly the favourites with unparalleled home support backing the Lioness to clinch glory.

Manchester United forward Ella Toone opened the scoring for England in the 62nd minute to put the hosts ahead in the final but her goal was cancelled out by Germany's Lina Magull, who equalised for her side in the 79th minute to silence the roaring Wembley crowd and force the game into extra time.

Both teams were relentless in the extra time in pursuit of the winner and it was England who managed to break the deadlock in the 100th minute when Kelly scored a sensational goal to clinch the trophy for her country. The crowd at Wembley went berserk after the goal as Kelly took her shirt off to celebrate one of the most memorable goals of her career so far.

Love women's football what an iconic celebration by Chloe Kelly lol twas worth the yellow card the ref gave her pic.twitter.com/T8cOwEpUkj

Reacting to England's memorable victory, captain Leah Williamson called it the proudest day of her life albeit until the time she becomes a mother. Williamson also insisted their victory will spark a new era in women's sport across England and the rest of the world.

"(It is) Proudest day of my life, until the day I have kids I suppose," Williamson told the BBC as she chuckled at the end while basking in the glory of her team's astounding victory.

“Proudest day of my life, until the day I have kids I suppose”

The Women's Euro title is England's first major trophy in international football since the men's team won the FIFA World Cup in 1966 after defeating West Germany in the final. England head coach Sarina Wiegman said it was pleasing to witness the kind of support the England women's team got from the home crowd and believes the tournament has done a lot to bring a change in society as far as women are concerned.

"I think we really made a change. I think this tournament has done so much for the game but also for society and women in society in England but I also think in Europe and across the world and I hope that will make a (bigger) change too," Wiegman said in the post-match presser after the Women's Euro 2022 final.

"It's really, really nice to see what we saw today when we came into the stadium how enthusiastic everyone was and how the fans have stood behind us," she added.