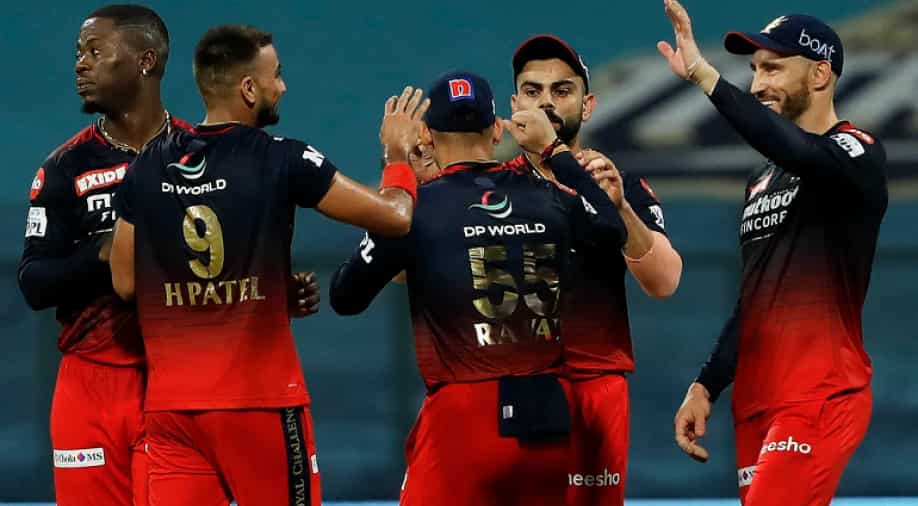 Harshal explained the difference between Kohli and Faf as leaders. | Photo - IPL | Photograph:( Others )

Royal Challengers Bangalore (RCB) have been enjoying a tremendous run under new captain Faf du Plessis in the ongoing Indian Premier League (IPL) 2022. With four wins so far in their first six matches, RCB are currently placed at the fourth spot on the points table and have seen a number of players step up to produce match-winning performances for the team.

While Dinesh Karthik has been exceptional with the bat as a finisher, the likes of Harashal Patel and Josh Hazlewood have done well in the pace department. Sri Lankan spin all-rounder Wanindu Hasaranga has also weaved his magic with the ball and has been among the wickets for the Du Plessis-led side.

Talking about RCB's brilliant run in the season so far, fast bowler Harshal Patel spoke about the great atmosphere in the team ahead of his side's clash against Lucknow Super Giants (LSG) at the DY Patil Stadium in Mumbai on Tuesday (April 19). The pacer said it has been good to see almost every player contributing towards the team's success so far this season.

"The mood is very good in the team. It's a team sport and in all our six games different individuals have stepped up with DK as an exception, he has played well every game. Very good to see everyone contributing," Harshal said ahead of RCB's clash against LSG on Tuesday.

Harshal was also asked to point out the difference between the captaincy styles of former skipper Virat Kohli and current captain Du Plessis. Kohli had stepped down as RCB captain following the conclusion of IPL 2021 last year and was replaced by Du Plessis ahead of the start of the ongoing season.

Explaining the difference between the duo in terms of their captaincy styles, Harshal said Kohli is aggressive while Du Plessis is a bit calm. "Virat is energetic and Faf is slightly calm, but the philosophy of the leadership is the seam. They both lead by example and they keep backing the players no matter what and the focus is always on the process," said Harshal.

Also Read: Makes me feel like I want to go back and play: AB de Villiers lavishes praise on RCB sensation Karthik

RCB rode on skipper Du Plessis' 96 off 64 balls to post a strong total of 181/6 in 20 overs in their clash against Lucknow Super Giants at the DY Patil Stadium in Mumbai on Tuessday. RCB will be looking to successfully defend the total and continue their winning momentum this season.