Makes me feel like I want to go back and play: AB de Villiers lavishes praise on RCB sensation Dinesh Karthik 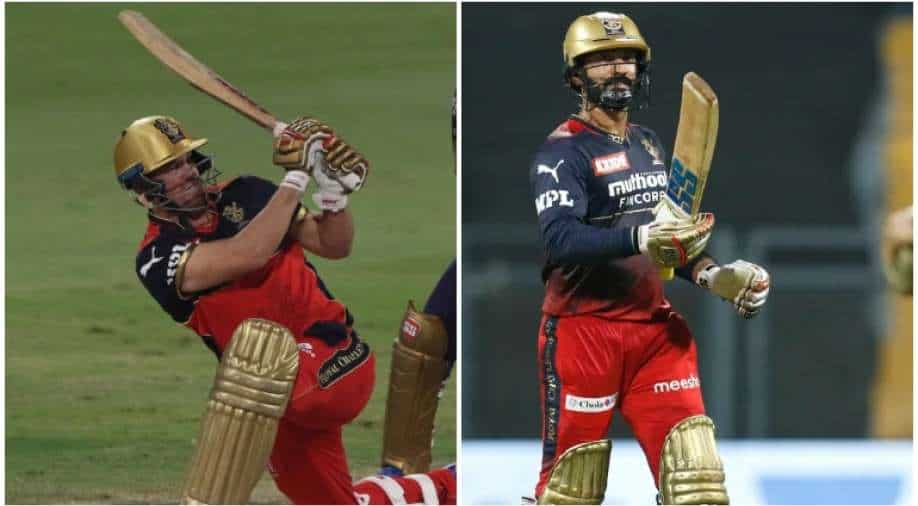 While many youngsters have performed in IPL 2022 so far, 36-year-old Dinesh Karthik has surely set the stage on fire with his fireworks with the bat for the three-time runners-up Royal Challengers Bangalore (RCB).

Seeing his miraculous form, former RCB superstar AB de Villiers couldn't help but lavish huge praise on DK. Before DK, ABD had fulfilled the role of a finisher for Bengaluru over the years and feels ecstatic seeing Karthik take over the mantle in style. "The form he is at this moment and he has already won RCB 2-3 games. He looks like he is in the form of his life. I don't know where that comes from because he hasn't played a lot of cricket. But man, he looks in good form and he plays around the wicket 360 degrees. He almost makes me feel like I want to go back and play some cricket again, watching him play. He gets me excited, plays under pressure in the middle order and he's got a lot of experience and if he keeps his form up there is a good chance that RCB are going a long way up," de Villiers told VUSport Streaming.

“I was incredibly surprised and I didn't expect it. I have always known that he is a very capable player, a nitty-gritty kind of a guy. He likes the high-pressure situations and he's a busy player at the wicket. But he hasn't played a lot of cricket. The last time I saw him before IPL he was commentating in the UK (during WTC final, India tour of England and The Hundred). He wasn't playing a lot of domestic cricket and I thought he is possibly at the end of his career finishing. But he surprised us all I think with the intent and energy," de Villiers added.

Meanwhile, Karthik has made it clear that while he wants to do well for RCB, his bigger goal is getting back to the Indian team in order to represent the Men in Blue in the forthcoming T20 WC. After his match-winning knock versus Delhi Capitals (DC), on Saturday (April 16), he told at the post-match presentation, "I must admit that I have a bigger goal. I have been working really hard. My aim is to do something special for the country. This is part of my journey. I have been trying everything to be a part of the Indian team."