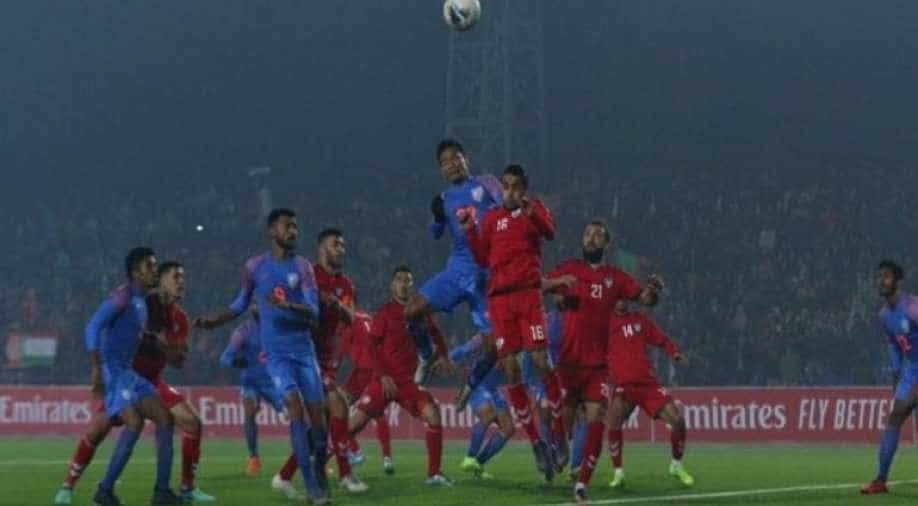 India played out a 1-1 draw against Afghanistan in the FIFA World Cup 2022 Qualifiers at the Central Republican Stadium here on Thursday.

Afghanistan opened the scoring at the stroke of half-time through Zelfagar Nazary, but super-sub Seiminlen Doungel headed in his first goal for India to equalise in the 93rd minute as the spoils were shared.

With this result, India now have three points from four matches in Group E -- this being their third draw in a row.

In their previous encounter at home to Bangladesh, it was Adil Khan who scored the equaliser in front of a packed house in Kolkata to earn the Blue Tigers a point.
This time, Doungel scored in added time of the second half. Following Brandon's corner, Doungel leapt higher than all and headed it home much to the relief of the Indian fans and bench.

The first half saw the Blue Tigers start well with Pritam Kotal creating a couple of crossing opportunities from the right flank which was cleared by the Afghan defence.

The best chance for India came in the 27th minute, thanks to some excellent pressing. Sahal Abdul Samad and Ashique Kuruniyan teamed up to force an error at the edge of the Afghanistan penalty area, with the latter's shot just going off target.

Seven minutes later, Ashique looked to create another opportunity as he looked dangerous down the left flank. He went past two defenders to enter the penalty area but was denied at the last moment by a third, who cleared the ball away.

Afghanistan came up with a shot on target from distance in the 39th minute through Faysal Shayesteh, which was turned around the post by a diving Gurpreet Singh Sandhu.

It looked as if both teams would enter the dressing room with the goalless scoreline but Afghanistan broke the deadlock through Zelfagar Nazary. Full-back David Najem crossed the ball from the right flank and it was converted by Zelfagar.

India created the last chance before the breakthrough Brandon Fernandes, who came up with a rasping drive from long range which went just wide of the goal.

Farukh Choudhary was introduced by Igor Stimac at the start of the second half, in place of Mandar Rao Dessai, and fashioned a shooting opportunity five minutes after the changeover. Cutting in from the left he fired in a shot from the top of the 18-yard box which was wide of the mark.

Ashique took the role of left-back and was a threat with his crosses, producing a fine cross in the 58th minute that just evaded an onrushing Sunil Chhetri. Pritam crossed it in from the right subsequently, which was met by Sunil this time, whose header was off target but saved by a diving Ovays Azizi in the Afghan goal.

The woodwork prevented Afghanistan from extending the lead six minutes after the hour mark. Substitute Noraollah Amiri came up with a powerful shot from 25 yards out that hit the crossbar and went out of play.

On the other side, it was a matter of inches yet again -- on two occasions -- as Sunil came close to scoring. He got his head to a cross from Pritam in the 67th minute but it was clawed away for a corner by Ovays again.

From the resulting set-piece, Brandon fired in a curling delivery that found Sunil, whose header from close range went just over the bar.

Gurpreet was called into action in the 77th minute and did well to palm the ball away from a long-range strike, with Seiminlen Doungel coming on for Pritam as the away side pressed for the leveller.

With two minutes to go, Brandon came up with a shot from 25 yards, which deflected off the defender and was saved by the Afghan custodian.