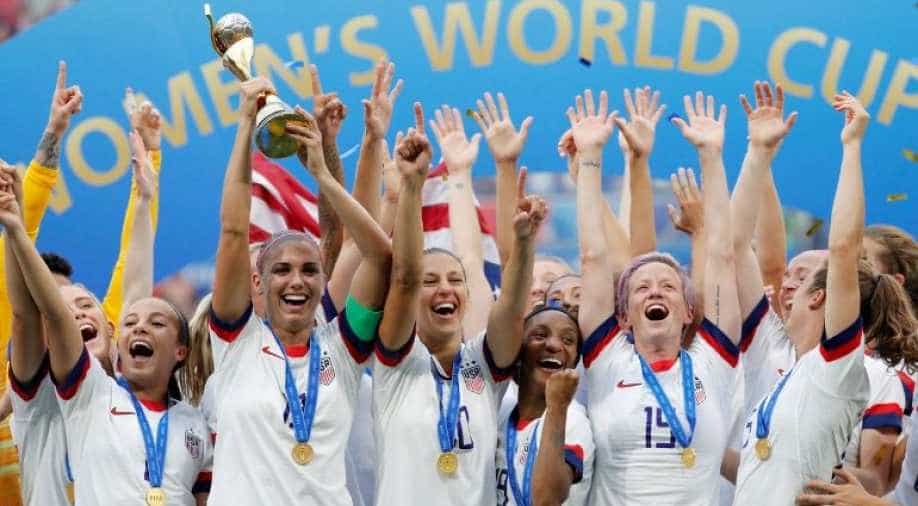 Alex Morgan of the US and teammates. Photograph:( Reuters )

FIFA agreed to increase the number of participating teams for the 2023 event from 24 to 32 following this year's edition in France, and it subsequently reopened the bidding process

FIFA agreed to increase the number of participating teams for the 2023 event from 24 to 32 following this year's edition in France, and it subsequently reopened the bidding process.

Belgium, which registered its interest last month, as well as Bolivia were not on the latest list.

"FIFA has dispatched updated bidding and hosting documents to all eight member associations, which will have until Dec. 13 to submit their bid book, the signed hosting agreement and all other hosting and bidding documents," FIFA said in a statement https://www.fifa.com/womens-football/news/bidding-process-for-fifa-women-s-world-cup-2023tm-continues-with-eight-member-as.

"Up until the deadline for bid submissions, any member association wishing to join an existing bid will be permitted to do so provided it also submits a bidding registration to FIFA."

The tournament's expansion was pledged by FIFA president Gianni Infantino at the end of this year's World Cup, which was won for a record-extending fourth time by the United States.

Interest in the women's game has arguably never been higher, with broadcast records broken all over the world in the June-July showpiece.

FIFA will conduct official inspections for relevant member associations in January and February 2020, and the hosts are expected to be named in May.