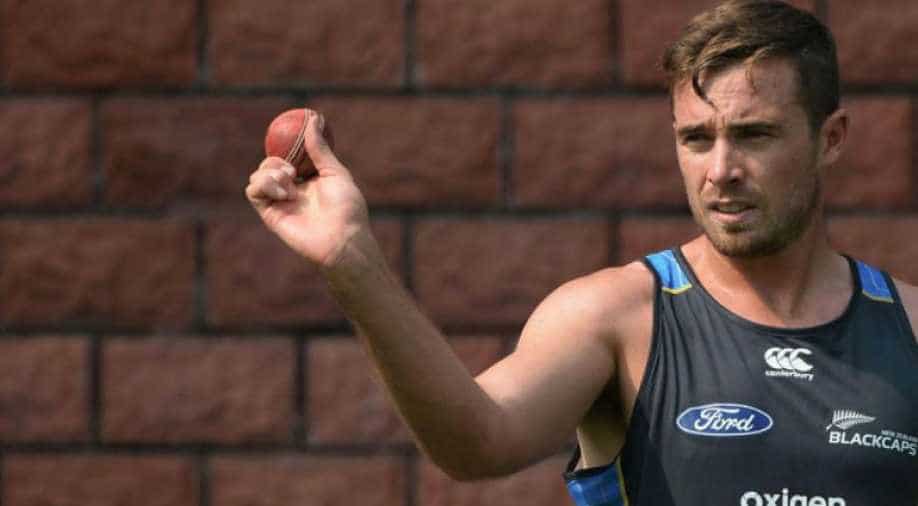 Southee and his wife are expecting their first child. Photograph:( AFP )

Veteran pacer Tim Southee has been one of the mainstays of New Zealand cricket team and has helped the Kane Williamson-led outfit to qualify for the ICC World Test Championship finale against India in Southampton, to played from June 18.

Veteran pacer Tim Southee has been one of the mainstays of New Zealand cricket team and has helped the Kane Williamson-led outfit to qualify for the ICC World Test Championship finale against India in Southampton, to played from June 18.

At the point when Williamson's men go into the Lord's dressing room this week there will positively be no gestures towards the honors board, where Tim Southee's name sits close by figures of six for 50 – and 10 in the match – during the Test in 2013.

In an interview with The Guardian, Southee said:  “I’ll just wait and see if some of the younger guys spot it. Lord’s is a pretty special place to play cricket. Walk-in and you can’t help seeing what people have achieved there over the years. But, yeah, it’s not really the Kiwi way to point these things out.”

Southee also commended Kyle Jamieson for declining an invitation to bowl at his Royal Challengers Bangalore captain Virat Kohli with the Dukes ball during IPL 2021, to help the Indian captain get a hang of the tall Kiwi all-rounder.

The RCB captain, arguably the most astute cricketer around, supposedly attempted to get knowledge into Kyle Jamieson's skills ahead of the ICC World Test Championship last. Be that as it may, the 26-year-old Black Caps cricketer denied the invitation.

Tim Southee has now said it was an easy decision for Jamieson to decline Kohli's solicitation.

“I’m pretty sure that story is true. But that would be the answer to most batsmen – why would you give them a look? It was smart from Virat to see if he’d fall into the trap but for Kyle, it was a no-brainer to not give the guy a glimpse of what he’ll be facing in the final".

Regardless of playing only six Tests, Jamieson has looked mature red-ball cricket. While he has gotten a day and a half at an average of 13.27. He has additionally scored 226 runs at an average of 56.50.

“But yes, a guy who bowls from 6ft 8in will only enhance any attack like ours. He’s a great kid and driven to improve. He swings the ball and always asks questions, bowling a full length. He’s invaluable with the bat too – a massive asset for the side," he added.

A portion of the solidness work here has helped through to Tim Southee's cricket, with significant wounds luckily scant. A smooth, repeatable activity has had its impact as well and he refers to Jimmy Anderson – set to turn 39 this late spring and going to play his 161st Test for England – as a motivation to take his own vocation profound.

"Jimmy shows age is only a number. For me it's as yet a fantasy to play for New Zealand, to address your loved ones. I need to go however long I can" - he signed off.