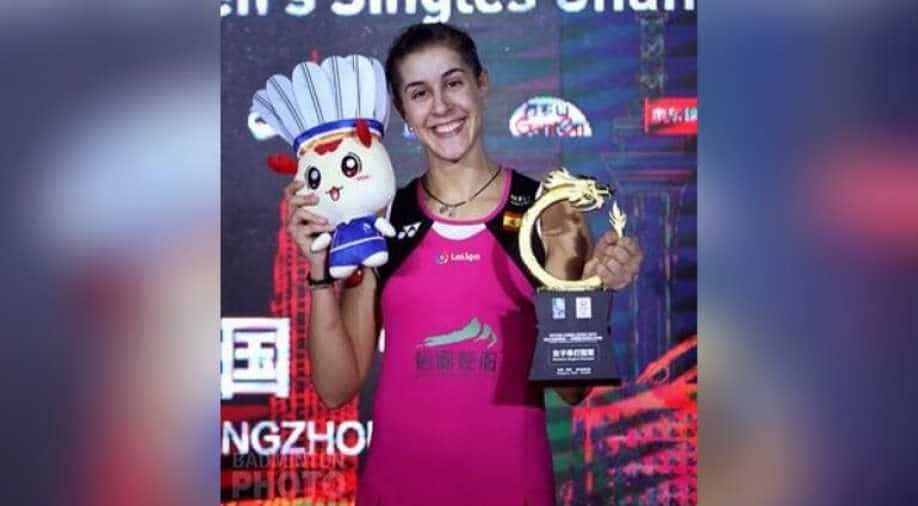 In the 65-minute-long clash, Spain's Marin lost the first game but made a comeback in the next two games to clinch the title encounter

Olympic champion Carolina Marin made a successful comeback on Sunday by defending her China Open title eight months after suffering a career-threatening injury.

The Spaniard tore the anterior cruciate ligament in her right leg during the final of the Indonesia Masters in January and had to undergo surgery and a lengthy rehabilitation before returning to court.

The tournament in Changzhou was only the second for the triple world champion after she lost in the first round of the Vietnam Open last week.

Marin faced Tai Tzu Ying in Sunday's final, having lost her last six meetings against the Taiwanese world number four. She took time to get going but rallied to beat the former world number one 14-21 21-17 21-18.

Marin slumped on the court and broke into tears as Tai sent a forehand crosscourt shot wide on match point.

"I cannot describe my feelings right now because I'm so happy," Marin was quoted as saying by the Badminton World Federation on its website.

"There was some frustration with myself in the first game. I tried to keep calm. I had to be patient and find the good length on the shuttle. But the most important thing is I could fight until the end.

"I just waited until she made mistakes. I just wanted to play some long rallies because I knew this match was going to be really tough. She has good strokes, she has so much deception that I had to be careful."

Tai found her opponent more skillful than before.

"The wind was coming from a different direction compared to the past few days. I made quick adjustments at the start of the match but towards the end, she played at a very fast pace," Tai said.

"I also made many unforced errors. But I have to admit that she played very well today.

"I think there's not much difference, she is still very fast. I also feel that she is more skillful now. I also noticed that she maintained her speed in every match. She is much better at the net and has more variety of shots."